Comms are, without a doubt, integral to a production’s success. Whether it’s over a radio or full-duplex communications, comms are a necessary beast. As a sound engineer, A1, A2, production manager, producer, etc. I have worked extensively with various versions of communications technology. I will focus on tech that is not brand new, mostly because that is far more common than shiny new systems. New comms systems are as rare and magical as unicorns.

Comms systems allow a production crew to speak to each other instantly. Many of my students question, especially after seeing how the equipment LOOKS, why don’t we just use phones and text? Aside from service issues inside buildings, battery life, distractions of other apps while working, etc., the main reason for me is that using a mobile just isn’t practical or professional. How many times have you had issues with a text going through? Depending on your network, this can be a frequent and annoying issue. Portable communication systems allow me to set up a reliable network of people within minutes. Hard-lines ensure fewer problems than wireless (although I’ve had my fair share of bad cables and mini fires). TEST EVERY COMPONENT before the show. Seriously. Do it. These devices are MADE to take a beating, but they are not immune to damage. They are hardy little boxes, especially compared to my glass-covered iPhone. 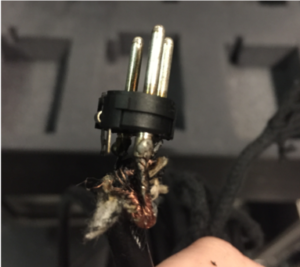 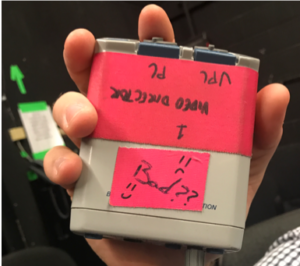 This PDF guide, The Handbook of Intercom Systems Engineering, first edition, Copyright© 2007 by Telex Communications, Inc is your magic textbook to all things comms. I frequently refer this to my students as a resource, and although it was published some time ago, I still find it to be completely relevant in the scope of existing installations. This document is my BEST advice to learning comms, troubleshooting, and designing systems based on your needs. Clear-Com and RTS have been around since the 1970s, and I believe some of that original equipment is probably still in circulation. While petitioning for new comms systems, most of the responses I have personally received involve “if it ain’t broke why fix it?” or some variation of that phrase. Most times, I am cobbling together a system from half-functioning components, which is frustrating and not the most helpful for such an important system. Comms aren’t sexy though, so many people aren’t eager to replace them.

Party lines sound way more fun than they actually are in real life. A party-line system is probably what most of you have encountered already. This system allows a group of people to communicate and have conversations. There is no limit to who is allowed to talk at a specific time, aside from etiquette, and there is generally no privacy.  A typical setup will include a power supply, XLR cables, belt pack user station, and a headset. RTS comms are a two-wire system, meaning that you can have the same path for talk and listen, and two separate party lines. These are more commonly found in TV production and sporting events. Most user stations will be connected in parallel, although having a splitter can help when you need to go separate ways.

There are so many options for comms equipment, and this will vary based on the manufacturer and your production needs.

A Power Supply is necessary for most comms equipment unless it comes with its own PS. For RTS, the PS20 is a standard power option.

A Main Station is rack-mounted user station, which will also require power from a PS.

Master stations are rack-mounted stations, combined with a power supply.

A Biscuit Box is a portable speaker station, which will require power from a PS.

Source Assignment Panel (SAP) is integral for larger productions. This allows up to 6 sources (Party Lines) and 12 selectable outputs (to people). Each user station can have two PLs. An SAP will give your production more selective communications so that each department isn’t talking over each other. If you have a video team, they need their own PL for the Director, Producers, TD, Cameras, Floor Manager, etc. They don’t need to hear about any issues from monitor land.

Who needs to be on a headset?

Paperwork and organization is a big part of the job of an A2. Anyone who needs to execute a cue at a specific moment needs to be on a headset. Who needs which type of equipment? Where are they located? Who do they need to speak with while on a headset? TV Broadcast gigs will have a lot more people on a headset than a concert or theatre event. For larger portable events, I will employ additional equipment, including a Source Assignment Panel. An input list for comms will help keep track of everyone. I will label the BP for each person; keeping organized is key! Using their names/titles for labeling is a good practice. If you don’t know, you can ask them. Communication is key. (Obviously.) 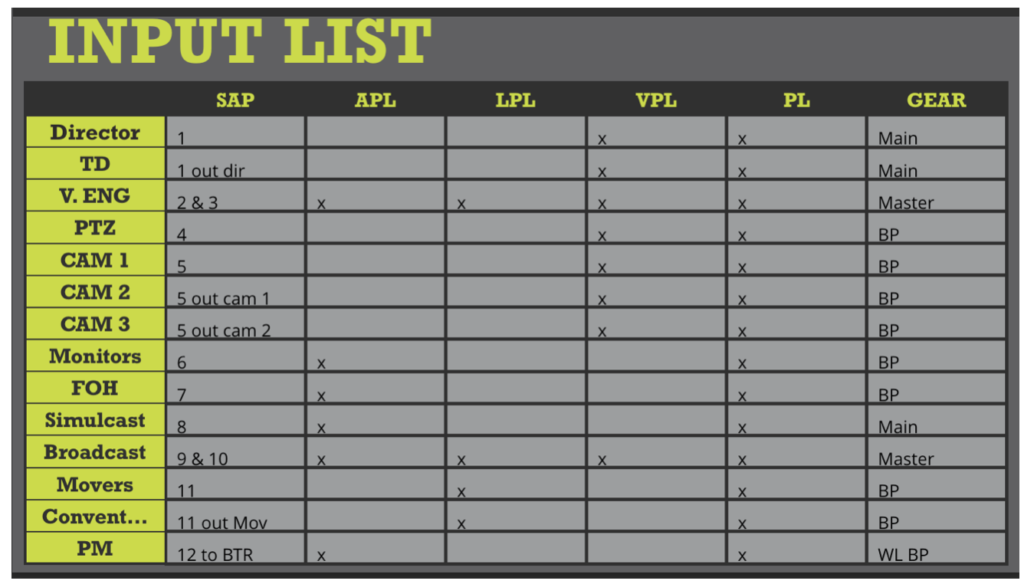 Susan Williams is an educator in Winter Park, FL, for a creativity and technology-focused university. Previously she was a local theatre technician and independent micro-budget film producer. She received her Bachelor of Arts degree in Theatre with a minor in Cinema Studies from the University of Central Florida. Susan has spent her career working for various theatres around the country, including the Orlando Repertory Theatre, The Garden Theatre, and the Lake Tahoe Shakespeare Festival. She has also worked as a digital projectionist for the Florida Film Festival. In addition to theatre, she has produced an award-winning short film, “Séance.” In 2014, Susan produced her first feature-length horror film, “Interior,” which has won many festival awards, including Best Horror Feature Film at Shriekfest 2015, Best Sound Design, NYC Horror Film Festival 2015, and Audience Award for the Knoxville Horror Film Festival 2015. Susan is an active member of the Orlando chapter of SoundGirls.