Inspire the Next Generation

Why is it so weird for men to see women working in technical jobs in entertainment? Perhaps it’s the same weirdness as seeing a woman as a plumber or construction worker. Plain ol’ sexism. Beckie Campbell, owner of B4 Media Productions and Orlando Chapter head of SoundGirls, recently returned to Central Florida after being out on tour. We caught up at a local SG Social. Beckie observed that only 1 in 19 venues she visited had a woman in a position of power. Most venues had women working as techs in various positions, which she felt was becoming the norm. What is stopping women from taking the next step into a leadership position?

Women in entertainment have made some amazing headway, Audio Engineering Society announced Nadja Wallaszkovits as their President last year and Christine Schyvinck has been the CEO for Shure since 2016. The accomplishments of these women were based on dedication to their careers and support from their peers. Without that support, many women fall flat when trying to advance.

According to a study of Women On Screen and Behind the Scenes in Television conducted by Dr. Martha Lauzen, “Overall, women accounted for 31% of individuals working in key behind-the- scenes positions. This represents a recent historic high, besting the previous high of 28% set in 2016-17.” The numbers for women working in audio-related positions on the top 250 grossing films of last year were far lower. 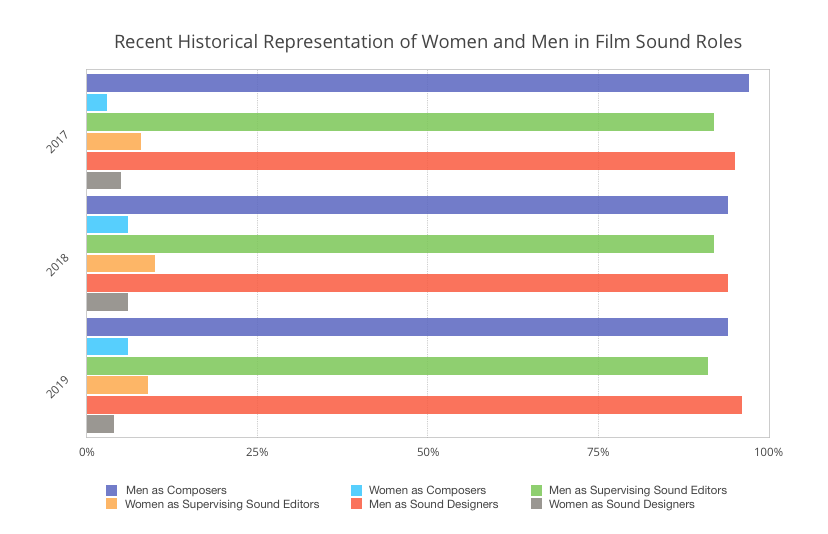 In other “non-traditional” professions, women still represent a larger portion of the workforce than in entertainment. Forty-five percent of all union members are women, according to the Teamsters Union (2016). Women as construction workers rank only 9.1% (Connley, 2019), and women as truck drivers come in at 6.2% (2018). Schillivia Baptiste emphasizes a strong point, similar to Christine Schyvinck’s keynote presentation at last year’s AVIXA Women’s Council Networking Breakfast.

“I think there is not enough introduction at the elementary and middle school grade age of what young girls can be,” says Baptiste, who links the industry’s scant female workforce to a lack of early exposure. “I think it starts there, and before you get to high school you’re choosing a high school that has something you want to study and then by the time you get to college you’re able to make a decision and say, ‘OK, this is what I want to do ’” (Connley, 2019).

Clearly it starts young. Girls are dressed in pink and boys in blue, and we give our children a predetermined place in life. Most of the women that I’ve met in audio and tech positions across the world have felt they existed outside the expectation that women should be homemakers and nurses, occupations that society accepts as female-appropriate. Empower your daughters, sisters, and nieces so they can have opportunities to learn and research whatever excites them.

Here are some great places to start educated the young women in your lives:

SoundGirls Women in the Music Industry

Dr Lauzen, Martha. (2019, September). Boxed In 2018-19: Women On Screen and Behind the Scenes in Television. Center for the Study of Women in Television & Film, San Diego State University.