Natalia Ramirez – Tuning her way into the music industry 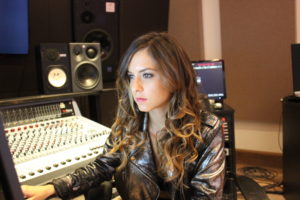 As a young violin player from Medellin, Colombia, Natalia Ramirez never imagined becoming the GRAMMY and Latin Grammy multi-awarded producer’s right hand. Natalia began music lessons at age 6; playing violin and singing got her interested in a variety of music-related activities: she was part of her school’s band for many years and became a member of a recognized young orchestra in Colombia. At some point during high school, her oldest brother moved from Medellin to Bogota to study audio engineering in college.  This is how she heard about audio engineering for the first time. Through her brother’s experiences, Natalia felt she no longer wanted to be a performer but someone involved with the “behind the scenes” of the music creation process. Natalia studied and received a Bachelor of Music with an emphasis in audio engineering at Javeriana University in Bogota. While being a student, she worked as a tutor in the audio department and got involved in several audio projects, initially doing post-production for films.

Talking about being the right person at the right time and the right place, in 2011 Natalia gets selected to participate as assistant engineer for a recording session with Julio Reyes Copello, Colombia’s most important songwriter and producer. The album recorded in that session, “Kany García” by Puerto Rican artist Kany García, received two nominations for the 2013 Latin Grammy Awards, “Best Singer-Songwriter Album” and “Best Engineered Album,” taking the Grammy under the “Engineered” category. During that session, Julio quickly picked up on Natalia’s incredible organizational skills as well as her precise musical ear and trusted her to tune vocals for a song right after. Natalia became obsessed with this process. She used her musical skills and audio techniques to make them sound as if no software had ever intervened with the original recording. Julio Reyes liked the result so much he immediately picked Natalia as a vocal post-production engineer.

After graduation in 2013, Natalia remained in Colombia working as a personal assistant and vocal post-production engineer for Julio Reyes’ projects. In 2015, Natalia moved to Miami to pursue a Master’s Degree in Arts Presenting and Live Entertainment Management at the University of Miami and then joined Julio Reyes Copello as studio coordinator and vocal post-production engineer at his personal studio, the Art House Studios, after graduating in 2017. As an engineer, Natalia has been nominated for three Latin Grammy and one GRAMMY award. Furthermore, she successfully earned the nickname “Nati-Tuner,” in honor of her outstanding proficiency as a vocal engineer. She has participated in more than 130 songs, by artists such as JLo, Marc Anthony, Ricky Martin, among many others alike. Her dedication, passion, and excellent technique for vocal production has been recognized by the Florida Chapter of the Recording Academy as Natalia was invited to feature her work at the 2017 In The Mix® Listening Session held at Marcella Araica’s studio.

I want to become an expert in treating vocals manually. Nowadays, everything is digital, and there are so many different plug-in options for tuning and aligning vocals, but I’ve noticed most of the times they are set to perform as an automatic response for certain key/rhythm. Most people don’t realize this damages the waveform, making the tuning sound very evident and bumpy and changing the natural frequencies that were captured. It can be aesthetic sometimes, but that doesn’t work in every genre. I feel getting hands on every single word, and vocal track individually makes a big difference on the final result. When you hear an artist sing, you remember why they struck a chord with so many listeners. If you start mangling with their voice carelessly and don’t take care of their identity, it undoes all the magic that they worked so hard to manifest.

This is an industry dominated by men, so being a young woman in the industry hasn’t been easy. I’ve faced many comments like “they hired her because she’s pretty” and things alike, so it’s been a huge undertaking for me to create a reputation for myself based on my work while others claim it belongs to the fact that I wear a dress. I believe that as a woman it is important to embrace the qualities that make us women instead of watering it down to “blend in.” We are all creators and members of a community that celebrates individual identities and personalities so why should I be shy to show mine.

Definitely, the confidence to face rejection, that’s the only way you will ever grow. Then it’s the clarity to acknowledge that even though you may be doing well that there is still more efficiency and expertise in other skills, you should be honing.

What other jobs have you held?

Another passion that I have is managing events. I got a master in Live Entertainment Management, so aside from being an audio engineer throughout these years, I’ve also been a studio coordinator for a variety of albums and a production manager for multiple live events. I love organizing and multitasking.

Advice you have for young women starting out?

Do you ever feel pressure to be more technical or anything else than your male counterparts?

At first yes, but then I remember that I bring something to the table that most of them don’t have, and that is my abilities I’ve developed as a classical musician (my ear) combined with my strength to multitask and obsession with detail

I usually ask for the instrumental and all the vocal tracks in one session. I prefer they don’t send me any files consolidated so that I can handle the original audio clips. I like to work with all the vocals dry, no EQs or reverb so that I can hear the natural color of the sound captured by the mic and the tails of the notes. This allows me to hear the little details in the voice (air, tone, sharpness, etc.)  I also ask for any additional takes that were not used in the final comp. I use these as a resource to make the transitions smoother, especially replacing “s’s.” I find it very helpful because during tuning even if you don’t change the pitch of an S I feel there is still something going on while it is passing through those plugins. If you can find a way to replace that effect on notes that have no tuning (S’s and T’s), then the final result will be much better.

My tool has always been Auto-Tune. I know that the latest version of Melodyne is excellent, but I believe the tools are only tools, so as long as you accomplish the results you want with your tool, then you have achieved what really matters. For this same reason, I prefer to tune without the key of the song set in my software. This might be unusual for most people, but to me, it makes a lot of sense as it helps me with the slides and drifts between notes to sound more natural. People tend to want to keep everything locked in the notes of the key, but like anything in music if you keep everything exactly on the grid you remove the magic in the music.

Pitch is not always perfect. When you tune an instrument, and you start playing, it eventually loses that “perfect” pitch. This happens in recording sessions as well, where the pitch can slightly vary throughout the session. That is why I tune my vocals making sure they follow that unstable pitch. You’d be surprised how many times I see someone send me something that is already “tuned” and “perfect” by the algorithm but sounds sharp or flat because the music isn’t always perfect.

Lastly, I like using post-production shortcuts to synchronize the chunks of background vocals instead of using automatic responses found in plug-ins like VocALign. It takes more time, but after trying so many methods out, I can say it makes all the difference in the world to go manual. Those plugins are incredible however when you’re stretching audio you are changing the actual waveform, so you create artifacts, lose textures (especially in the high end) and even cause phase issues. Doing it manually sounds more natural, and you’d be surprised at the difference this makes when you’re stacking 40 vocals. 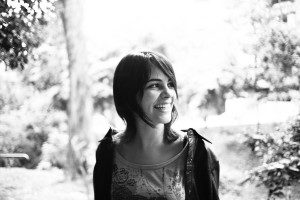 Maria currently resides in Miami with over ten years of experience in recording, mixing, music production, and post-production. Maria works as an independent audio engineer and has worked with a variety of artists, producers, and studios. Including Juanes, Kronos Quartet, Nashville Symphony, Bogata Philharmonic, Fiona Records and more. In 2016, Maria created the independent label South Mountain Music, as a platform to develop and produce fresh music for upcoming artists. Since 2007, Maria has worked as a university professor teaching audio related courses in Colombia, Tennessee, and Florida