A little bit of everything- Kerrie Mondy

WORK WORK WORK
For someone who only began working in live sound 2 1/2 years ago, Kerrie Mondy is a very busy woman.  Along with being a FOH Engineer, Kerrie is currently the Resident Engineer/Sound Designer for New Line Theater, a little theater company in St. Louis, MO.  She also works as a stagehand, freelance audio tech, part-time at several performing arts centers, and runs sound at St. Louis’ Jazz at the Bistro, which she says “is a blast! I get to see a lot of great music and meet a lot of nice people. I have, at last count, 10 regular jobs. 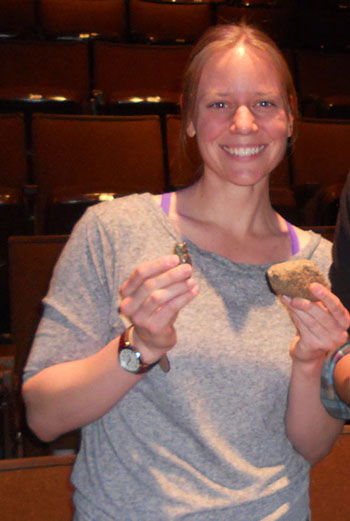 Kerrie started out as an on-air radio personality but quickly became interested in live sound.  Making commercials and putting together shows for the station were part of her job but she wanted to learn more about audio engineering.  Kerrie taught herself enough Pro Tools to get by, however became discouraged when she couldn’t get any time on the station’s engineering equipment.  Soon after, she started working as a stagehand and quickly realized that she loved the theater world and doing live events.  As a stagehand, Kerrie enjoyed working in many of the departments, but her boss advised her to pick one specialty and pursue it.  Kerrie chose live sound.  Recognizing her desire to learn, a colleague/friend from one of the venues she was working in, gave her the opportunity to work with him running sound at the church he attended.  After a while, she started working her own shifts there.  “In the meantime, I looked around for the smallest-fry audio work that I could find. If it was boring, small, paid poorly, etc, I raised my hand for it! 🙂 Worked my way up little by little, learning as I went.”

Things came a bit full circle as she recounts- “as an on-air personality, I remember coming to one of the venues I work at now to announce an artist on stage. I remember looking around, watching the crew, and thinking that it would probably be a neat job to work in a place like that. A few years later, I was working shows on that very stage!”

Kerrie has learned that a good attitude, a willingness to learn, and being accountable for your mistakes are essential, as well as knowing the basics- signal flow, proper gain staging, and knowing your frequencies. From her experience, these skills will get you through almost any basic audio job and help you move up. “Don’t let ‘fake it to make it’ become your mantra” she says, “You WILL get called out eventually.”

Although she is working on a BA in Digital Video/Film making and has studied marketing and technical theater, Kerrie has no formal audio training and has found so far that the best education she’s received has been on the job.  “I’ve been really lucky to be surrounded by wonderful coworkers who became great mentors and friends. So many people have shared their hard-earned knowledge and experience with me – I never could have done this without them.”

The biggest obstacles Kerrie has faced have been: “money and time mostly, and my own doubts. Five years ago, I was in a completely different situation, personally and professionally, but I saw what I wanted and what I needed to do to get there.”   “Staying on track has been tough,” she says, but she handles it by being relentlessly focused on controlling what she can and being ready to adapt to things she can’t control.  “You have to really, REALLY believe you can have the life you want.  You have to see it in your mind and know deep down it’s achievable.”  “I see so many people quit before they get to the finish line- giving up, losing patience, because they just can’t see their dream life coming to fruition.”  “I’ve encountered a lot of not only financial and logistical challenges, but psychological ones as well. It’s hard being in your 30s and being a newbie, not having a professional identity – being able to tell people, “I am (this)”, or “I do (this)”. You really have to develop a sense of worth and purpose apart from that.”

Advice to women wishing to enter the world of live sound:
One – Attitude is, indeed, everything. Your approach to your work, and to the people around you, will define you. Don’t feel like it’s a right of passage to become jaded.

Two – be versatile. Not just in the realm of audio, either. I’m not an expert in lighting, projection, or set building, but I can work as an electrics, video, or carpentry hand competently. I can also crew a show and manage that crew. Not only does an array of skills help you find more work and meet new people, it helps you understand how your job in audio fits into the bigger picture. And it keeps things fresh!

Her favorite gear includes Allen & Heath’s iLive T112 console.  She loves the simplicity of it and the ease of accessing everything she needs quickly. “ I use it at two of my venues.  Getting things up and running in a hurry is a breeze and making changes on the fly couldn’t be easier. Bossy technology bugs me. I love gear that gives the user control and flexibility without making them dig for it. I also really like Shure’s MX153 ear-worn mic. Sounds good, cheaper than the competition, and it’s rugged and resistant to sweaty actors. 🙂

Kerrie has been with New Line Theater for about a year and just started with the Bistro in December.  She is currently featured as a Guest Blogger on SoundGirls.Org where you can read about her trials and tribulations as the sound designer and mixer for the theater’s production of Rent.

Kerrie can be reached at: kmondy@hotmail.com

Rena Kozak is a FOH engineer and tour manager based out of Calgary, Canada. She has always had an interest in arts and has played in numerous Calgary bands as well as studied painting and drawing at University before becoming a sound engineer.
Read the Full Profile

Caroline Sanchez works in Broadcast Audio as an A2, RF Tech, and Pro Tools Op on recording trucks. She also works in live sound as an A2 and AV work. Sanchez is freelance and regularly works for ABC, NBC, MTV, and Music Mix Mobile.
Read the Full Profile

​ Lisa Kacos currently leads interactive online workshops such as the forthcoming Music Theory for Producers Workshop held April 30th through Omni Sound Project, where she is a core faculty member for 2022, as well as a popular Rhythm for Songwriters course. As a musician, she writes and records her own music and has played with...
Read the Full Profile
We use cookies on our website to give you the most relevant experience by remembering your preferences and repeat visits. By clicking “Accept All”, you consent to the use of ALL the cookies. However, you may visit "Cookie Settings" to provide a controlled consent.
Cookie SettingsAccept All
Manage consent