Podcasts are a booming industry, and there is much room to increase production value even further. Recording the subject is always priority number one. By adding to that priority and recording rich audio, it is likely that you will increase your listenership by having an experience that immerses the listener. For those podcasts that are conducting interviews outside or on location rather than in a studio, there is a sophisticated yet simple recording setup: the mid-side rig!

Think of mid-side recordings as customizable stereo. You record two channels, bring them into your DAW, and work some encoding magic to create a file with adjustable stereo width. From a storytelling perspective, you get your subject, or interviewee, in the center and also an immersive stereo ambience. Long used in music and field recording, there are many opportunities to make podcast production shine with this versatile technique.

The “mid” is a cardioid, hypercardioid, or supercardioid mic, and the “side” is a figure eight mic. (Caveat: there are variations with omni mics as the mid, which generally make for a wider stereo field.) The mid mic captures your subject in your center channel, and the side mic, which is aimed 90 degrees from the source, captures the environment.  Whether you choose a hyper or supercariod mic depends on what you are capturing. A supercardiod mic makes for a wider stereo image when you encode it later. And, despite hypercardiods being more directional, I personally tend to favor the supercardiod pattern for recording people in the field. A subject can afford to be a little more off-axis, ensuring that if the rig is not aimed 100% perfectly, there will still be a good capture of the subject.

The two sides of the figure eight mic are 180 degrees out of phase, so a positive charge on one side of the mic’s diaphragm creates a negative equal charge on the other side. The front of the mic (the plus side), is pointed to the left, while the rear (or negative side) is pointed to the right.  In the past, I have used a Sennheiser MKH 50 for the mid and an MKH 30 for the side. They are sturdy and sound great! In live concert situations, I have seen engineers use AKG 414s with the polar patterns set accordingly. The important thing is to avoid phasing by correctly lining up the mic capsules. In the pictures below, the MKH pair has the mid mic positioned so the top of the grill is behind the bottom of the side’s mic capsule. The mid of the 414 pair is facing “north-south” while the side is positioned “east-west.” 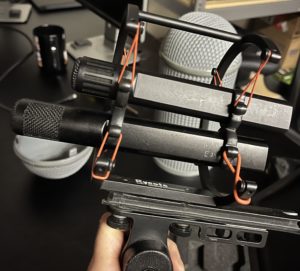 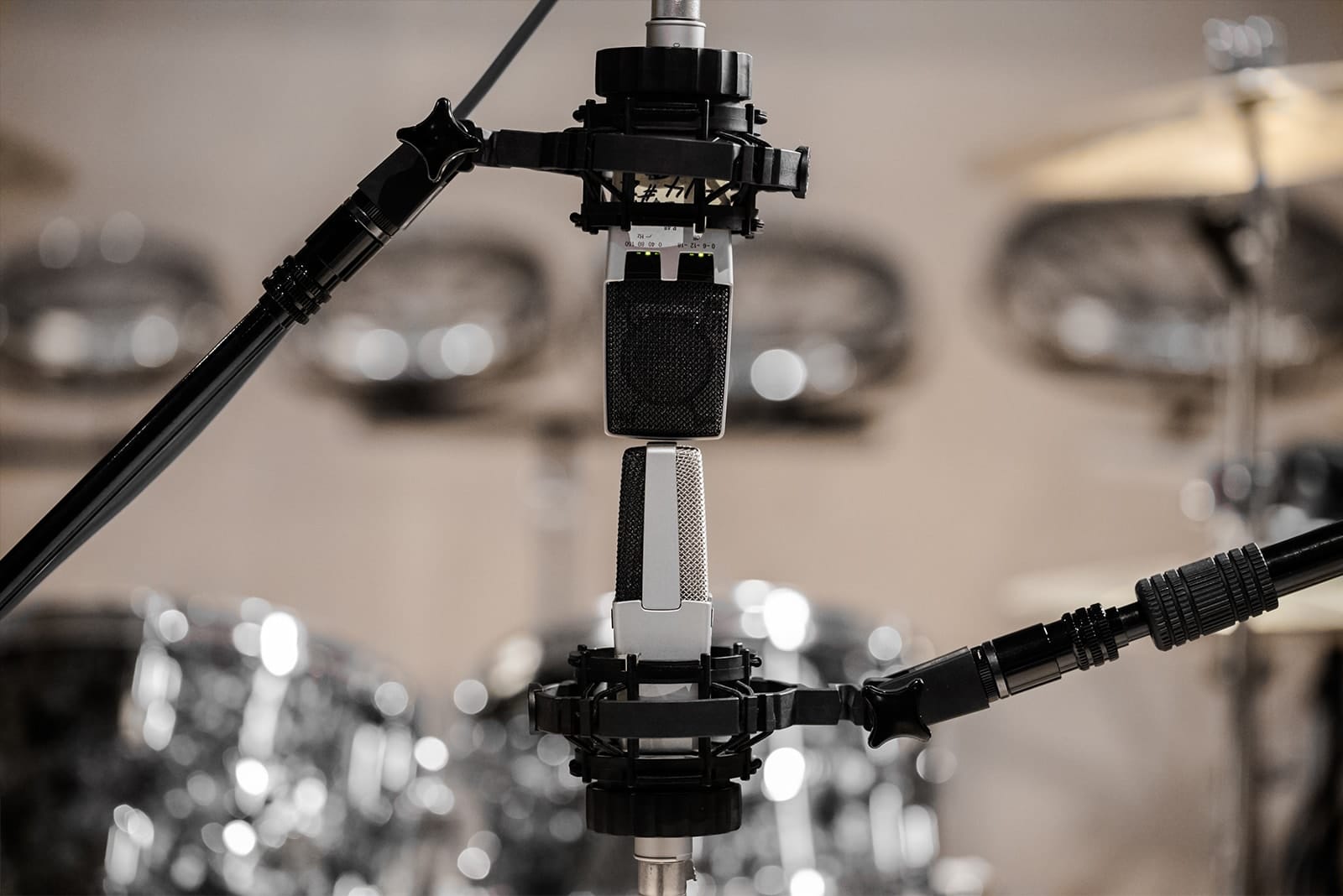 As far as physically rigging it up, I’ve personally used a Rycote pistol grip and blimp specifically made for mid-side recordings with the MKH mics. For interviews in the field, definitely use a pistol grip (or some kind of shock absorption) and wind protection that will fit your setup.

My recorder has a mid-side setting!

Don’t use it. Record each channel straight mono because you will encode the recording later! Leaving the work for your DAW keeps your stereo width customizable, which is the beauty behind mid-side recording. Record each mic to a single track.

Where the Science Happens

All pictures provided are of ProTools, but everything you need to do to master your recordings are basic functions of any DAW. After you import your recordings, make a third track. Copy the audio from the side mic to this track.

Flip the phase of the copied audio. Here, I’ve done it with the Trim plugin.

There is a technical benefit to mid-side recordings other than ear candy. On stereo systems such as headphones, listeners will hear stereo ambience. On mono systems (such as a single bluetooth speaker), because the phase on the side copy gets flipped, when the audio gets summed to mono, the original audio cancels the copy out. The recording sums to mono automatically. Changing the phase relationship gives control over how the mix sounds on the distribution side.

Recording with the mid-side technique in the field is a serious consideration because it is an easy way to create immersion for your podcast. Try it on your next interview! 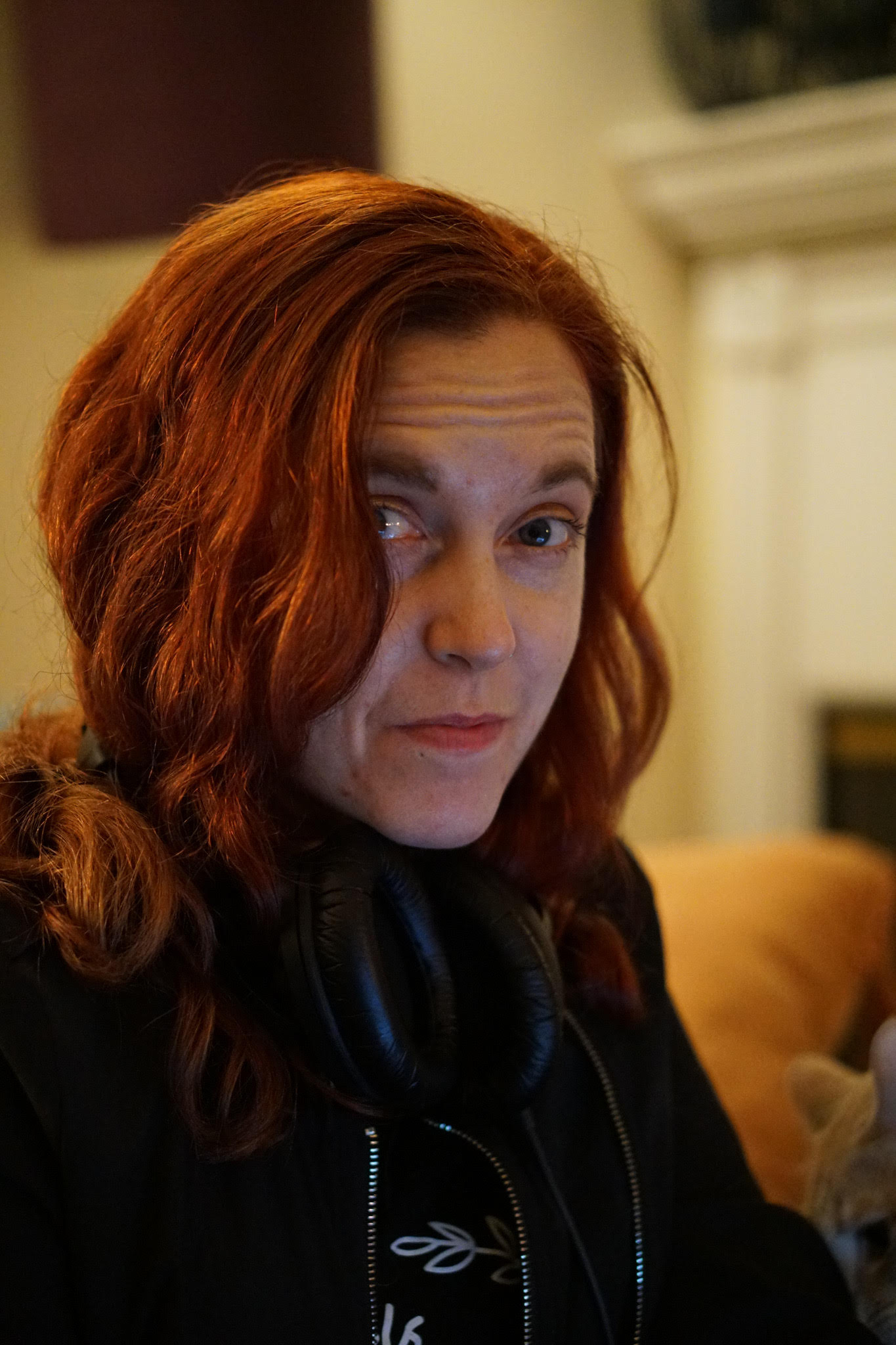