Behind the scenes for M83 at the Hollywood Bowl

Critically acclaimed French electronic band M83 will be headlining the Hollywood Bowl on September 22, 2013. M83 will present their ambient pop and luminous synthesizers backed by the Hollywood Bowl Orchestra, a choir, and guest musicians and vocalists. They will reinforce their set with added bass, guitars, and piano. Anthony Gonzalez has (the man behind M83) hosted a video contest for two songs “Intro” and “Moonchild”, the winning videos will debut at the Hollywood Bowl, and each will receive $4,000. The show promises to be an extravaganza of sound, light and visuals. SoundGirls.Org caught up with their FOH engineer Julia Brightly to discuss the planning and pre-production for the show.

Julia was first approached to mix M83 in 2011, but was committed to Mogwai for the year. M83 waited for her commitment to end and she started at FOH in March of 2012. In 2012 M83 exploded, quickly out growing venues they were booked into. Their New York show at Terminal 5 turned into Summer Stage followed by two nights at Hammerstein. In London, M83 played Shepherd’s Bush and then Brixton Academy as shows around the world sold out.

M83 and Joe Trapanese (composer) have spent 2013 working on the soundtrack to ‘Oblivion’ and are currently finishing up writing a new album. The Hollywood Bowl will be the only show in 2013.

M83 has a lot going on ordinarily without the addition of the orchestra and choir and SoundGirls.Org asked Julia how she approaches mixing M83. Julia says she starts with the drum mix making sure that the drums fit into the electronic mix. Julia does not use overheads opting instead to mic the cymbals underneath with a small diaphragm condenser mic, like an SM81. She uses different effects on different songs to give the acoustic drums an electric feel. The drummer uses a midi kick drum and SPDS pad, playing various digital kits and getting the balance right is key.

Julia spent time with both the techs and musicians to get a guitar sounds, they experimented with different mics and amps. Julia says the guitar sound for M83 is intentionally quite thin, so they chose Sennheiser 609s, which can maximize the signal and take a beating. Her choice to use a SM57 on bass is a first. She has found when combined with the DI, and the playback electronic bass it works perfectly. M83 has three keyboards that trigger all kinds of different sounds, and a modular synth. Julia is using SM58’s for the vocals and running them through a good tube compressor.

With everything that is happening onstage, Julia found she really had to go deep in learning the show. She chose to not to use snapshots to mix as she wanted to be involved with the sound, immersed in it, and for the mix to be spontaneous. Julia is mixing 40 inputs with 14 stereo effects returns and says she has never used so many effects before. She has had to pick effects that work well together and does her best to reproduce the album, yet keep it a live experience. The show varies from sweeping ambient film type scores to full-on thumping dance music and brash rock. Julia never envisioned using an analog console as there is too much going on.

Already having her hands full with the regular M83 set up of 40 inputs and 14 stereo effects returns. Julia and Joe Trapanese made the decision to let the Hollywood Bowl provide a house engineer to mix the orchestra and choir and send left and right feeds to house and monitors. The Hollywood Bowl FOH will be under the direction of Julia and Joe will conduct the orchestra. The M83 crew started discussions on the show back in May and have been working on the final details the last few weeks. They will be using the Bowl installed L’Acoustics K1 rig and bring in their a usual rental package of Avid Profiles and stage wiring from Clair Global. Their production manager Chad Taylor has been busy making sure each department has their equipment and is handling interfacing the orchestra and choir.

Rarely does Julia or M83 crew have the luxury of production rehearsals, but this time they have an entire week at SIR in Los Angeles. Unfortunately, the Hollywood Bowl orchestra will not be involved with the rehearsals. They will instead rely on an extra long sound check day of the show and Julia hopes that Lighting Designer Sarah Landau will load in the day before. Sarah has some surprises up her sleeve and will have a lot of equipment to load in.

During the rehearsals, they will map out how to integrate the extra musicians in the stage layout and plan for the orchestra and choir to set up behind the band. The orchestra and choir will join M83 on about a half dozen pieces. Julia believes the key to this show is having the orchestra sub mixed so she can concentrate on the M83 mix. There are some songs M83 have not performed live so she will use rehearsals to dial in effects and playback. Having done over 120 shows with Robbie Barr who handles the playback they have it wired. Julia will only bring in a few extra pieces of equipment for this show, some microphones for the additional musicians and Eventide Anthology plugins on an iLok rented in for the show, specifically for the reverbs, plus some tube compressor plugins.

Julia is a bit concerned with the house db limit, preferring to keep the house mix at 102 to 105 db A weighted. She likes it loud, so the house mix envelops you and moves the body. She knows the K1 rig will sound good wants to present a live show that is very true to the album.
Julia says M83 has a great crew and will work hard to make sure all of the elements come together to provide a great experience for the audience. Julia will remain professional and calm on show day.

The only thing Julia is missing is the gear and budget to create her dream effect – “At the start of the show there is low rumbling sound that fades in, like a spaceship landing and an ‘alien’ comes out on stage. I wanted to have speakers at the back and then sides (overhead not possible obviously) which I’d cross fade as the volume increased, so it was really like the spaceship was coming from the distance and landing on the stage”. 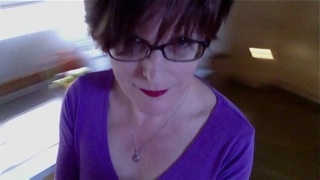