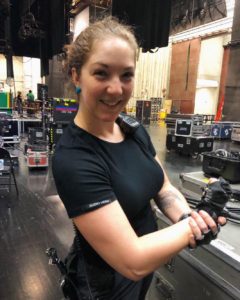 Willa Snow is an independent FOH, Monitor Engineer, and system tech-based in Austin, TX. While she has only been working in Live Sound for just over three years, she is filling up her resume.  She regularly works with Texas Performing Arts, Stage Alliance, and C3 Presents, amongst others. She works as a board op/system tech for Bass Concert Hall, as a monitor engineer at Historic Scoot Inn and Emo’s, and as a FOH/MON engineer for several other clubs in town. She has toured with the Grammy-nominated choir Conspirare during the fall of 2018 for their piece, “Considering Matthew Shepard,” as an assistant stage manager and general audio tech.

Before Willa discoverd the world of audio, she was pursuing a career as a singer/songwriter. She was playing coffee shops and small venue gigs at the age of 15, and she says “despite that I had no clue about the world of audio, all I knew was that I had to sing into a mic nice n loud.  I don’t recall ever having a monitor mix, or even an engineer introduce themselves.”

She would enroll in college the intention of going into performance. This was until she was required to take a recording technology course for her major.  “That year I fell HARD for working in the studio. I loved how many variables there were to play with, and all the different directions that you could take a piece of music in. The creative process was suddenly busted wide open for me, and I couldn’t let that go, so I switched my focus to engineering. My decision to change solidified when I found out how few women there are on this side of the industry… less than 5% is just B.S! I became even more impassioned when I started working in live sound at 23 and discovered all the directions that you could take that path in, and all the wonderful types of music and performance that you’re exposed to! Since being a youngin singing acoustic pop-punk in run-down venues in Silicon Valley, my instrument has changed from a guitar and my voice to a console and mics. Each show that I work is a chance to explore and express my musicality alongside the incredible talent that I get to work with here in Austin, TX.”

Willa started out working in recording studios while in college as a ProTools op and audio engineer. She has a BA of Contemporary Music from Santa Fe University of Art and Design, where she was trained in various instruments, music theory, orchestration, advanced vocal techniques, western and world music history, and basic business management, as well as studio production. In contrast, all of her live sound knowledge has been developed on the job and through independent research on various subjects. 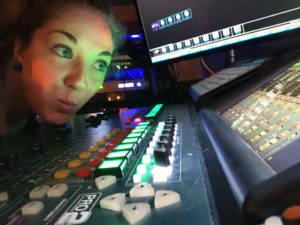 After graduating from college, she moved to Texas and ended up taking a job in live sound as an A2 for a small local production company, where she was taught how to build PAs and tune systems. While there, she soaked up everything she could learn and said she “initially hated live sound! In comparison to the studio, it’s loud, chaotic, and terrifying, Everything’s happening all at once, and almost nothing goes according to the original plan. I must have developed Stockholm Syndrome because now I can’t get enough of it! I’ve learned to love the fluidity and chaos, and I’m constantly finding myself challenged to grow and inspired by the techs that I encounter and the artists that I get to work with.”

Like many of us, when Willa first started running sound, she was terrified of failing. She put a lot of pressure on herself and says she felt “that as a woman, people were going to be looking at me as an example of all women engineers. If I wasn’t 100% absolutely perfect, then it would be reflected 100x worse on me than it would a male in my position, and it would be a stain on the reputation of women engineers the world over. I put all that pressure on myself, despite having only just begun my journey into live sound!” 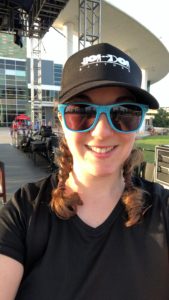 Then  Willa started to notice something… “in my conversations with more experienced engineers and hearing their origin stories, they all said the same thing: they were TERRIBLE when they were starting out! I heard many tales of butchering mixes and struggling to make broken gear work in dirty clubs. I finally realized that in order to grow and move past this mentality, I needed to give myself permission to fail. So, before every gig, I would have the following conversation with myself: “let’s go out there and SUCK! Let’s have the worst mix ever, and get shamed out of the club! The band is going to hate everything you do, and the gear’s going to catch fire, and it’s going to be GREAT!” And strangely, that worked for me. Giving myself the space to be an inexperienced failure allowed me to embrace that risk, and to go in with a clear head and tackle the show. At the end of the day, we’re all human, and humans mess up and make mistakes, and that’s okay; the key is how you recover from that mistake. Do you own it, fix what needs fixing, and learn from it? Or do you wallow? After a few months, I didn’t need that non-pep pep talk anymore. Now I just walk in with my shoulders back and a big, fat smile on my face.”

One of Willa’s Early Failures

Early on in my experience (I think it was my second gig), I had a show where All The Things Went Terribly. I was given an incorrect load-in time; I hooked up the mains wrong, my iPad mixer was futzing out, the stage sound was terrible, the FOH mix was REALLY bad… so bad in fact that when the singer of the band greeted the crowd and asked, ”how’s it sounding out there?” the audience responded with, “clap… clap… crickets…” An audience member standing near me even leaned over and asked me, “it doesn’t sound good, does it?” I could do nothing but admit that indeed it did not. Oh, it was so embarrassing!! Thankfully the band was very kind and even tipped me at the end of the night.

As soon as I got home, I called up one of my sound buddies and took him out for beers. I walked him through the entire gig, top to bottom, and asked him for some guidance on the mix, and for advice on how to do things better.

A few weeks later, I got the opportunity to mix the same band again. I made sure to get to the venue extra early, set up and rang out the stage as cleanly as I could, incorporated some suggestions my friend made into my mix and remembered exactly how the band set up the stage and where they needed lines. The band showed up, and this time, All The Things Went Smoothly. Stage and FOH sound were vastly improved, the band had a great time, the audience had a great time, they even gave me a ‘thank you’ shout out!

As Willa continues to learn and grow, her long term goals are to become a touring FOH /Monitor Engineer and System Tech.

I like hearing how the sound of the music changes in different venues, and the constant momentum of traveling from place to place

I miss my loved ones and my own bed while I’m away.

My favorite day off activities are resting and taking care of my plant collection. It’s lovely to have a period of quiet and calm after the storm.

I have several interests that I’m avidly working towards, my main ones being touring as an FOH and/or MON engineer, and/or as a system/PA tech.

What, if any, obstacles or barriers have you faced?

I’ve been turned down for a tour because of my gender, and am all-too-often dealing with unwarranted attention and sexist comments.

It depends on the situation. For the tour, I let it go and decided that wasn’t a tour I wanted to be involved with anyway. I turned to the SoundGirls forum for advice when going through that process, and deeply appreciated the support and words of encouragement that I received from the group. When dealing with sexist comments on the job, sometimes I’ll ignore them, while others I’ll confront head-on and shoot something back (ex: if I get called honey, I’ll call them sweetie. Stops that sh** real fast.)

Learn as much as you can from every situation and interaction, and ask as many questions as you can at appropriate times. Don’t be afraid to work hard, and allow your enthusiasm to drive you. Always keep an air of professionalism at every gig, no matter how big or small. Say yes to every challenge and opportunity possible. Be authentically who you are and embrace that; faking it until you make it is not a thing. It’s okay to stand up for yourself when you are being mistreated; no amount of abuse is worth your time or mental health.

Have a running knowledge of basic signal flow, mic placement, gain structure and EQ techniques, and learn to embrace failure (how else are you going to learn?). Be kind and cool to those you interact with, and keep your connections positive as much as possible.