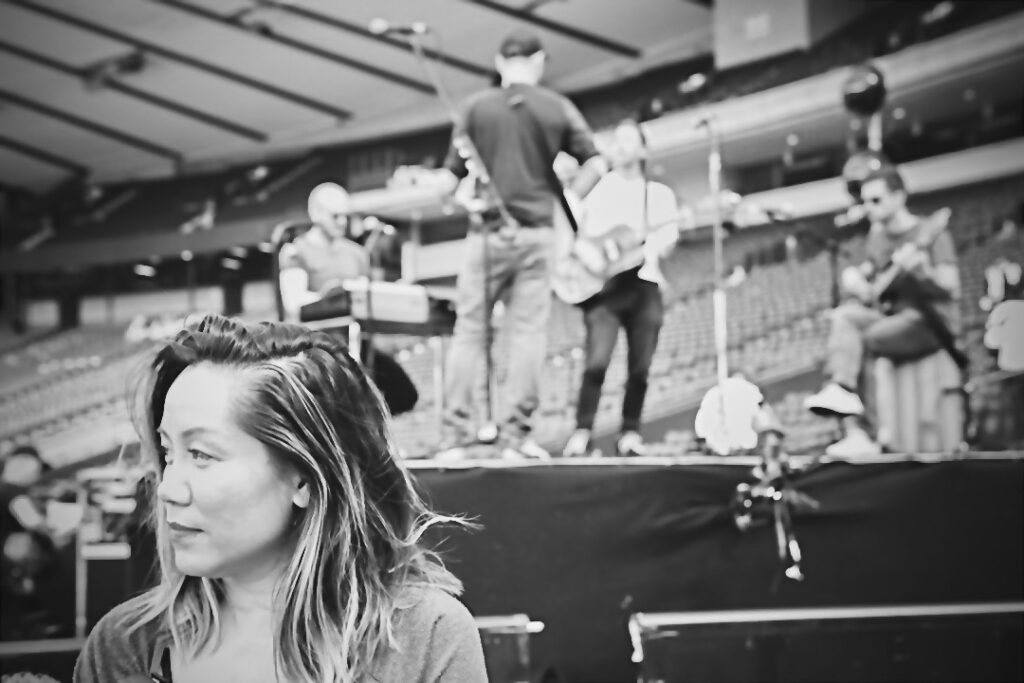 Marguerite Nguyen is an independent tour manager who has worked in the industry for 25 years and has been on the road since 2000. She got her start working as a production assistant and has done everything from Merch to VIP ticketing and Meet & Greets. She now tour manages some of the biggest names in the industry Coldplay, BTS, Janet Jackson and Charlie Puth.

While she always loved music, she had no idea she could have a career in it. She went to college and received a degree in Mass Communications, Radio/Television Broadcasting from VCU in Richmond Virginia.  Marguerite says “ Honestly I chose my degree cause I just wanted an easy A. I had to go to college, that was the next step in my education career as dictated by my Asian Family. They thought I was going to be the next Connie Chung.” She spent her time at VCU on college radio and became the program director in her senior year. It was then she realized that maybe she could work behind the scenes  “I thought maybe I’d end up at NPR or similar, working behind the scenes.”

During her senior year, she had a few internships that really highlighted the path she would take. “My senior year internships were so pivotal to me. I was fortunate to be shown two roads. One I thought wanted and one I didn’t know existed. I think without the Promoter Internship which eventually led me to my mentor Matt Miley, I wouldn’t be where I am today.”

The promoter internship led to working with a local promoter in the ’90s. It was during this time that she realized that there were very few women tour managers and decided to set this as her goal. Working on the promoter side of things helped her immensely to learn the business. Her mentor Matt Miley would eventually offer her a touring gig with The Indigo Girls. From there hard work, gaining experience, and a great attitude led to her successful career working with some pop’s biggest acts.

We asked Marguerite a few questions about her job

I have to say, I love touring and my job. The travel. Making people smile. I love everything about it. I love a daily routine but at the same time, troubleshooting whatever comes my way. And accomplishing impossible tasks. It’s not rocket science. We aren’t curing Cancer over here.

We all work really hard to make that show happen, being away from our homes, families, partners, etc.  So whatever I can do to make people’s days go by better + have a laugh at the same time – I’m in.

I guess what I like least is that there are people in the world that want to make things more difficult vs easier.

My day off activities have been long gone. (note tour managers do not have days off) But I do like discovering good food in different places around the world. And seeing old friends in said towns.

I don’t really have aspirations to be a manager or go higher than where I am currently. I’ve always wanted to be a TM and I’ve done it at a level I never thought I’d be at. Oh one thing actually to retire before being sent home in a box.

What if any obstacles or barriers have you faced? How have you dealt with them?

I think every woman in every industry in the world has faced hardships in some sort of fashion. For me, it’s been sexism, ageism and racism. I try not to let it bother me, I mean I know it’s there, in my face all the time. But I’ve been fortunate to be around a great team of people who support me in those trying times. Ultimately, the less energy you give it the less power it has.

Be kind. Be kind to everyone and not the proverbial you see the same people going up as you see going down.

I treat my singer the same as my runner as the security guy sitting outside my office and the cleaning staff that do rounds during the day.

Hone your craft. Perfect it.