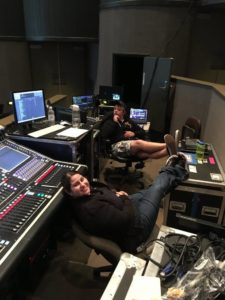 Now Head of Sound for the US National Tour of Les Misérables, she recalls how in high school, it was initially acting that drew her to theatre, “I loved that idea that in theatre you can break the mold and push boundaries.” It was a surplus of female actors for the annual musical that led to an unexpected introduction to technical operations: “I actually wanted to do lights, but my sister was older, so she got to pick first, and she picked lights. Little did I know that running sound for that musical would set me up for the rest of my career!”

That initial step led to further sound and tech work at high school and at 16, she got a job as an audio operator at the San Antonio SeaWorld park. When it came time to consider college, it seemed a natural step to continue working in technical theatre.

Her “official” introduction to theatre sound design came after meeting Curtis Craig at a Texas Thespian Festival. Craig became her sound design professor at Penn State, where Heather studied for a Bachelor of Fine Arts in Theatrical Design and Technology, with an emphasis on Sound Design and Costume Technology.

At college, she expanded on the skills she learned in high school and at SeaWorld. “[which] were more “this happens, you push this button” with a little bit of mixing,” and was introduced to all aspects of technical theatre. These aspects included scenic, lighting, costumes and technical direction, with higher level classes and show assignments in her areas of emphasis. 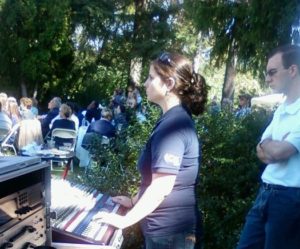 After graduating, connections and recommendations from Penn State enabled her to get a job with NETworks Presentations. Following college, she started touring as an A2 (Assistant Audio, also called Sound No. 2 in the UK). Aside from some summer festivals and freelance design/mixing work for smaller theatres in Dallas, Texas (where her family is based), she’s toured for the past six years. Over this time she’s worked on six shows, moving up to the A1 (Head Audio, or Sound No. 1) position for the last two shows.

Early on in her career, she felt pressure to be more technically adept than her male counterparts. “I’m quick to pick up a mix, and I can organize and do split and cut tracks faster than most, but I have to get my hands on gear and spend time with it before I really understand it. I can’t rattle off hundreds of model numbers, and it took me a while to be okay with that. You need both sets of skills to make a show work.”

Even so, she says that her real challenge was her mindset, “It took me a bit longer than it should have to make the transition from A2 to A1 because I would let my insecurities get the better of me and convince me that I wasn’t ready to do it on my own. When I finally decided to make the shift, I found out I was fine. There’s always more to learn, and sometimes you have to force yourself to make that leap.” 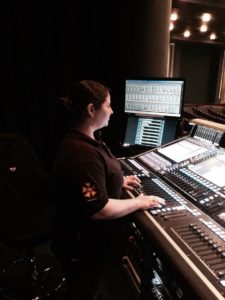 In her current role as Head of Sound for the US National Tour of Les Misérables, Heather is responsible for mixing the show, maintaining the overall sound design and managing the logistics of getting the system in and out of the various venues.

Like any major touring production, the national tour of Les Mis travels with everything needed to walk into a bare stage and set up a show from scratch. Set, costumes, electrics, audio and everything else required fits into eleven 53-foot semi-trailers. With a show this size, planning is paramount, and long (and early) hours are part of the job.

Sound get-in at a new theatre starts with an advance rigger/swing tech who leaves the previous city on load-out day (usually Sunday) and works with the local crew in the new theatre on the next day (Monday) for five hours to rig the monitors. The rest of the crew finish the load out from the previous theatre around eight to ten hours after the last show goes down (usually Sunday evening into the early hours of Monday morning), jump on a bus and go to the next city. The full load-in starts at 2 pm on Monday and finishes around 11 pm, with a dinner break. The crew go back in at 8 am the next morning (Tuesday) for another eight hours, with a show on Tuesday night. The rest of the week runs with one evening show on Wednesday, Thursday and Friday, and two shows on Saturday and Sunday. For a week “sit,” load-out happens after the second show on Sunday, and the process repeats for the next city. Every couple of weeks the show might stay at a theatre for two to three weeks, and the crew will get Mondays off. 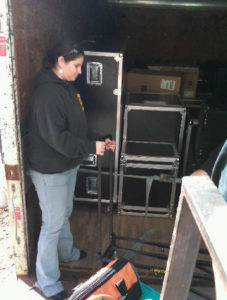 Heather admits that her least favourite part of the job is working between 5 am – 7 am: “I don’t care if we’re loading out and it goes into the morning, or if we start the day with a 6 am call, I’m happiest when I never have to look at a clock during those hours.”

During load in, as A1 (Head Audio) Heather is responsible for getting the system up and running and tuning and timing it. The current Les Mis system comprises a DiGiCo SD7 at Front of House (FOH), Meyer Leopard arrays, UPJ center cluster and delay truss, UPM front fills, 600HP and 500HP subs. D&B E5s are used for underbalcony delays and onstage monitoring. Meyer Galileo and Callisto systems are used for processing, with two redundant QLab machines for playback. They use a Sennheiser SK-5212 wireless system with DPA 4061 mics.

After the show is in, Heather will mix the majority of the shows, as well as being available for rehearsals (possibly one or two a week), particularly “put-in” rehearsals. These are essentially full runs of a show with full tech elements for swings, understudies or new members of the cast: “People will start leaving for various reasons (contracts end, other jobs come up, etc.), so the cycle continues as you continue to rehearse and put new people into the show.”

The second person in the sound department, the A2, will mix around two shows a week and runs the “stage sound” – the backstage aspects of the show. This includes managing all radio and onstage mics, troubleshooting and running a show track or teaching this to a local stagehand. Heather jokes that “the A2 is the PR rep for the department because [they are] the one around all the actors and crew while the A1 is out at FOH during the show.”

As well as the responsibility of getting the sound up and running at each new theatre, the A1 has to think ahead to the next stage on the tour.

The system is specified before the tour by the Sound Designer, whose job it is to work with the director and MD (musical director) to create and define the overall sound for the show. This will include choosing the speakers, mics, console, processors and everything else that’s required for the system, tuning it and sourcing or creating sound effects and soundscapes. The job of the A1/Head Audio is to learn the sound and replicate this in each theatre on the tour. Part of the A1’s role is, therefore, to consider whether the tour has enough speakers to cover the next space and whether it can accommodate their rig.

Does the new venue have any quirks for which they need to plan?

It’s clear that as well as technical expertise, the job of an A1 requires solid organisational skills, flexibility, patience, and persistence. Heather emphasises these last three as being key when touring: “Things are never going to work out quite the way you want them to, and mistakes are going to happen. [You have] to get right back up and try again.”

She encourages any women and young women who want to work in theatre sound to “Figure out what your thing is and go with it. I hear a lot of people trying to figure out the “right” way to deal with discriminatory situations, but there is no one-size-fits-all solution. Learn from others, but realize that it’s okay to have a different way of dealing with people, and find out what makes you comfortable.” 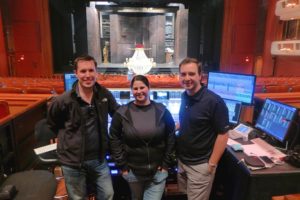 From Heather’s perspective, theatre can be a supportive environment for women. “[There’s] a lot of support. Both from women who are already in the industry, and from a lot of guys who are happy to see more and more women in audio. I can’t count the number of times that someone has told me it’s great to see a woman or an all-female audio team (when my A2’s have been women) come into their theatre.”

As for the future of theatre sound, Heather believes there will be a shift towards using more digital technology. This is particularly in light of the FCC (Federal Communications Commission, the regulatory authority for wire and radio communications in the US) moving to auction off increasing amounts of the RF (radio frequency) spectrum. She also believes departments will become more integrated. Many shows, like Les Mis, already link sound and lighting cues through MIDI, and other elements such as automation and effects can also be linked together.

In terms of her own career, Heather would love to mix on Broadway. She’s also looking towards a time when she has the financial independence to be able to work on smaller or newer projects that feed her passion.

For the moment, Heather appreciates her job for two reasons.

First, the people: “It’s still mind-boggling to me how you can know someone for only a couple weeks, but after you tech a show, do a couple grueling load-ins and outs, you form a bond, and it feels like you’ve known each other for years.”

And second, “there are times I watch as I’m mixing, and take a moment to appreciate what an amazing show it is, and how incredibly proud I am of it. Those moments make all the days of planning, the long hours working, and (sometimes) the lack of sleep worth it.”