Fleetwood Mac Tours with the Next Generation of Women in Audio

Over a span of forty years, Fleetwood Mac has survived numerous incarnations and several breakups to become one the most popular music groups in the world. They have sold more than 100 million albums and have several top ten singles such as “Rhiannon”, “Go Your Own Way”, and “Don’t Stop Thinking About Tomorrow”.  Fleetwood Mac is currently on a world tour, and Stevie Nicks has declared 2013 the year of Fleetwood Mac. It is also the year that their sound crew has added two women to the roster. Meet Hope Stuemke and Meg Tempio. Stevie Nicks has always demanded respect in a man’s world saying she “wanted to be respected by every single dude on that stage” (Nicks qtd. in Yuan). Hope understands the struggle Stevie and Christine had in the ’70s and is thrilled to see things have changed. Hope says “when people see that you know what you’re doing, you’re a hard worker, and you’re smart, man or woman, you get respect on the road.” Stevie and Christine were role models for Meg, and their driving force in the music industry was a source of inspiration. Meg thinks it speaks volumes being women on the audio crew for Fleetwood Mac and Hope has never felt more respected as a fellow roadie. Mick Fleetwood even admitted to his meet-n-greet guests that he couldn’t believe a tiny girl (Hope) put up all those speakers. Obviously, this made her day. 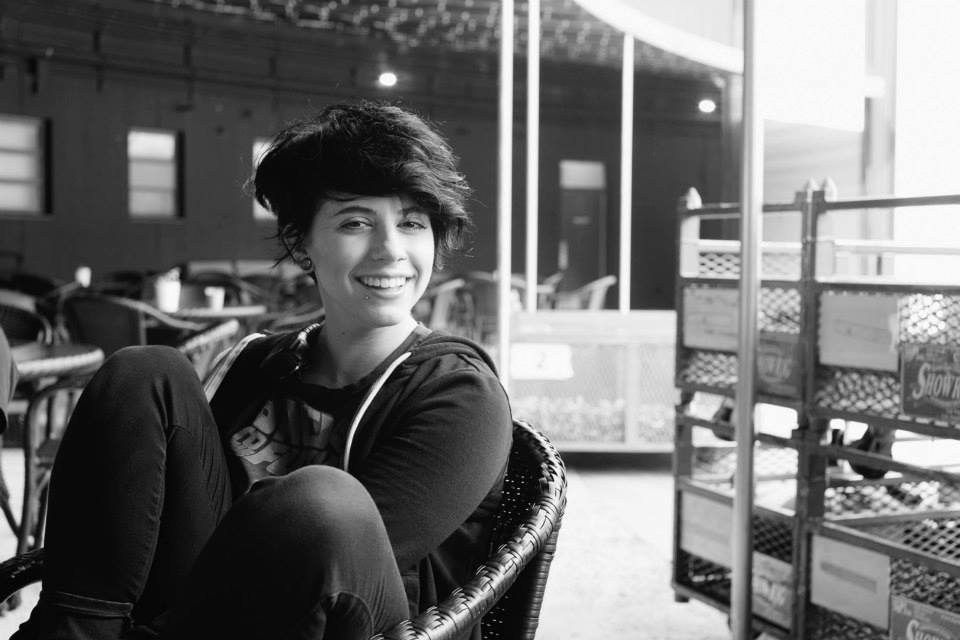 Meg was involved as a musician in the local music scene of Greenwood, Indiana but found that she hated being on stage. She soon found herself working for a small club, and that opened up the world of live sound to her. Meg started off selling merch and eventually “got in the van” tour managing local metal bands. Van touring has definitely made Meg appreciate having a bunk on the bus. Hanging out at a music festival called Cornerstone – Meg got her first taste of a large-scale production. She watched how a barren field was transformed into a music festival for thousands of kids. She was hooked.

Meg went to Full Sail and felt that the program was fantastic giving her a sampling of what the real world is like. She graduated with a degree in Show Production and Touring and then got a job with Audio Integration Services in Chicago.  Meg worked for AIS for a little over a year, mainly providing sound systems for electronic dance shows.  Matthew Edgar and Nathan Short of AIS were completely supportive of Meg, giving her a solid foundation, and always took the time to answer all of her questions. Meg eventually landed an interview with Clair Global and was accepted into their Road Staff Training Program. Fleetwood Mac was her first tour for Clair, and she has just finished Paul McCartney. She will be heading back out with Fleetwood Mac on their European and Australian runs. 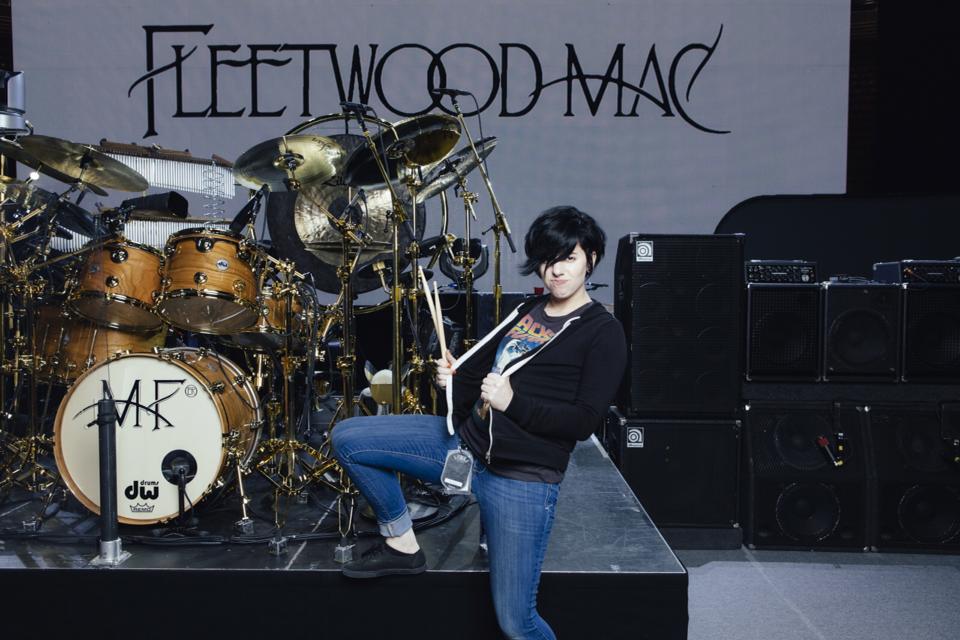 Meg has found that she has met some of the most incredible and inspiring people touring and would eventually like to become a monitor engineer. She has been fortunate to work with side some pretty talented engineers and says it is fascinating to watch their different approaches, from how they interact with the artists to mixing.

Meg believes there is still a stigma that comes with being a woman in the industry. She has lost count of how many times she has heard backhanded comments about not being able to understand or do something because she is a woman. Her advice to other women is to have a “thick skin and let it roll off your back. Have a sense of humor and laugh it off”. Meg says there were many moments that she felt like she had hit a wall and would never achieve the goals she had set. She says “Don’t give up, if you want it bad enough, you can make it happen.” Having a sense of humor and a positive attitude can make a world of difference. A good work ethic, being approachable, and easy to work with are incredibly important skills. Lastly, if something goes wrong, don’t panic – learn to work through it. Those skills will be extremely important for mixing monitors.

Meg’s advice for balancing road vs. home life: It is easy to get stuck in the bubble, but taking the time to text or call home will help keep you connected to people you love.

Meg is a history buff and enjoys spending her days off exploring with the help of an App called History Here. It pulls up your location and tells you what historical events happened in the area. One of the highlights was the Warhol Museum in Pittsburgh. She also enjoys having amazing meals.

Meg is still amazed that she gets to work in live sound and every day wakes up realizing there is nothing in the world that she would rather be doing. She looks forward to seeing what the next chapter brings. SoundGirls does too and look forward to hearing about it. 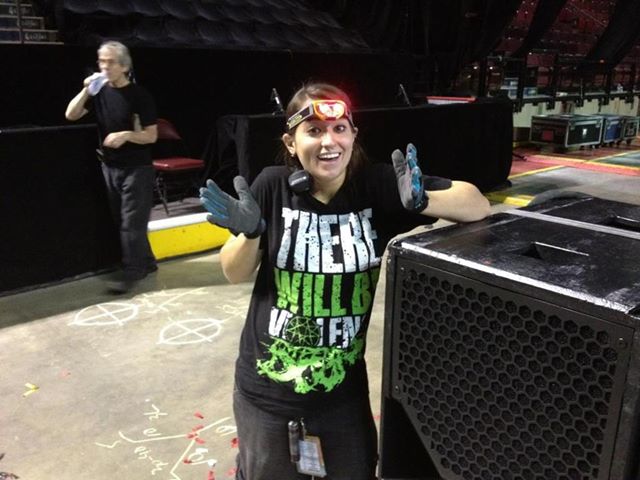 Hope is currently a PA and Monitor Tech for Clair Global; she has worked there for three years. She prefers working on the PA side and believes she would prefer mixing FOH to monitors.  She is currently on tour with JAY Z  and Justin Timberlake.

Hope was introduced to live sound through the youth band at her church. She says when the church found out she could sing and play guitar they threw her into a room full of PA gear, cables, and chord charts. She soon found herself as the leader of the youth band and soon became frustrated with their soundman. “He was pretty much deaf, and I was completely convinced I could make anything sound better than he could.” Hope eventually discovered she disliked performing and enjoyed manipulating music. That is when she decided to pursue a career in audio.

Hope went to Belmont University for Audio-Engineering and was able to work at Clair’s Nashville shop. Hope says the Belmont program is very thorough and covers the history of recording, how to record to tape, how to use a digital audio workstation, microphones, mixing and mastering techniques, acoustics and room treatment, and electronics and circuit theory. Belmont offers a class called Tour Production, which teaches the logistics, politics, and etiquette for life on the road. Hope says the class saved her from making a lot of mistakes and is grateful for it.

The live sound department at Belmont is where Hope called home. They ran an entirely student-operated sound company. They booked their own shows, maintained the gear, staffed the gigs, drove and loaded the truck, and did gigs. They even installed a sound system in the campus cafe. From Belmont Hope was accepted into Clair’s Road Staff Training Program and started working at the Clair Lititz shop. There she would spend half the day working in the Clair shop for whoever needed help. She would move between cable world, prep world, and speaker world. Then she would spend the rest of the day in class learning Clair-approved methods for system building, AC power, PA rigging, and proper RF design.

Hope has learned a lot about touring in the past few years such as breakfast makes a happy roadie, a productive crew always takes a break for meals even if it is only ten minutes. Take your time during load-in, ensuring everything is done right the first time and makes for productive load-outs. Learn how to balance all the personalities on tour and know that sometimes it is better to hold your tongue. She has picked up tricks and shortcuts from other roadies and has become particular in the way she does certain things. She says that she is destined for OCD in her future. She has learned to drink responsibly and is still trying to determine her breaking point. 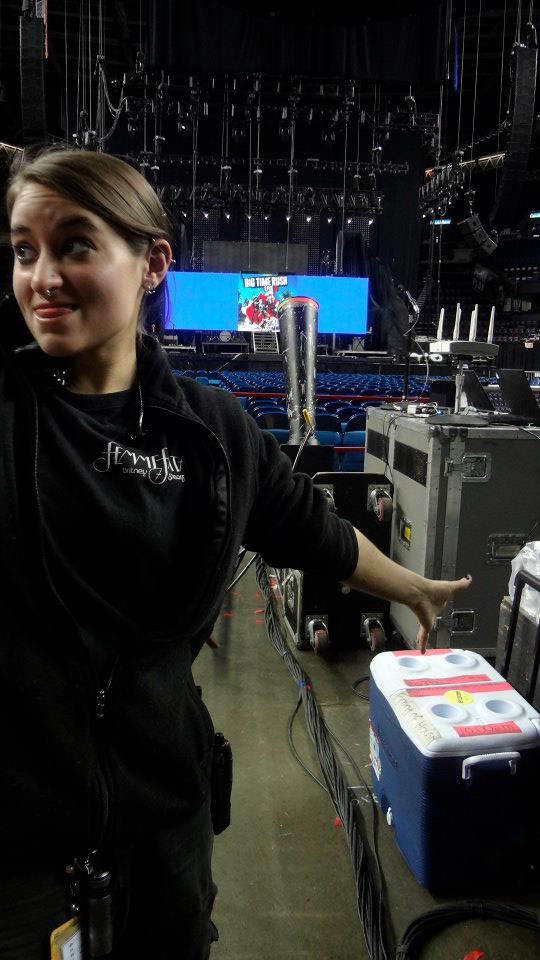 One of the challenges Hope faces is communication, and this is such an important skill to master, her advice is “It’s all about respect. Most of these people have been a stagehand longer than I’ve been touring, and half of them could be my parent”. Hope tries to find a way to instruct local crews while not talking down or yelling at them. Occasionally, Hope finds “there are a few people who just don’t get it, and that’s when the monkey see, monkey do principal works well. Do the first one with them. This also works well when no one speaks English”.

Sexism: Hope feels that it is rare, but still out there.  “Mostly the older guys who can’t grasp women in the workplace. My favorite example was a down-rigger telling me to “let the men do the real work” when I was trying to answer a question he had about one of my points. I walked away only because the rest of his crew apologized for him”.

Hope offers this advice to women wanting to enter the world of live sound:

Communication, patience, attention to detail, working well with others, learning from your mistakes, napping, radio and bus etiquette, troubleshooting, and cable management skills.

“I’m still new to this industry, and this is just a snapshot of what I’ve learned so far. This business is truly unique. If you can be a great roadie, I think you can be anything in life. But for me, I’m happiest on the road, so on the road, I will stay.”

Thanks for taking the time Hope and good luck in your future endeavors.

GIRLSCHOOL is a music festival that celebrates women-identified-fronted bands and women artists. After spending a decade as a “sideman” in the alternative rock world, where you really don’t see a lot of other women around—onstage or on your crew—I started to really miss and crave the camaraderie of women.
Read the Full Profile

Katy Templeman-Holmes is the Director of Marketing for Professional, at HARMAN.  She started out in recording and broadcast engineering before moving over to the business side where she has worked for Euphonix in Technical Sales, then to SSL for Business Development, and finally to HARMAN.
Read the Full Profile
We use cookies on our website to give you the most relevant experience by remembering your preferences and repeat visits. By clicking “Accept All”, you consent to the use of ALL the cookies. However, you may visit "Cookie Settings" to provide a controlled consent.
Cookie SettingsAccept All
Manage consent