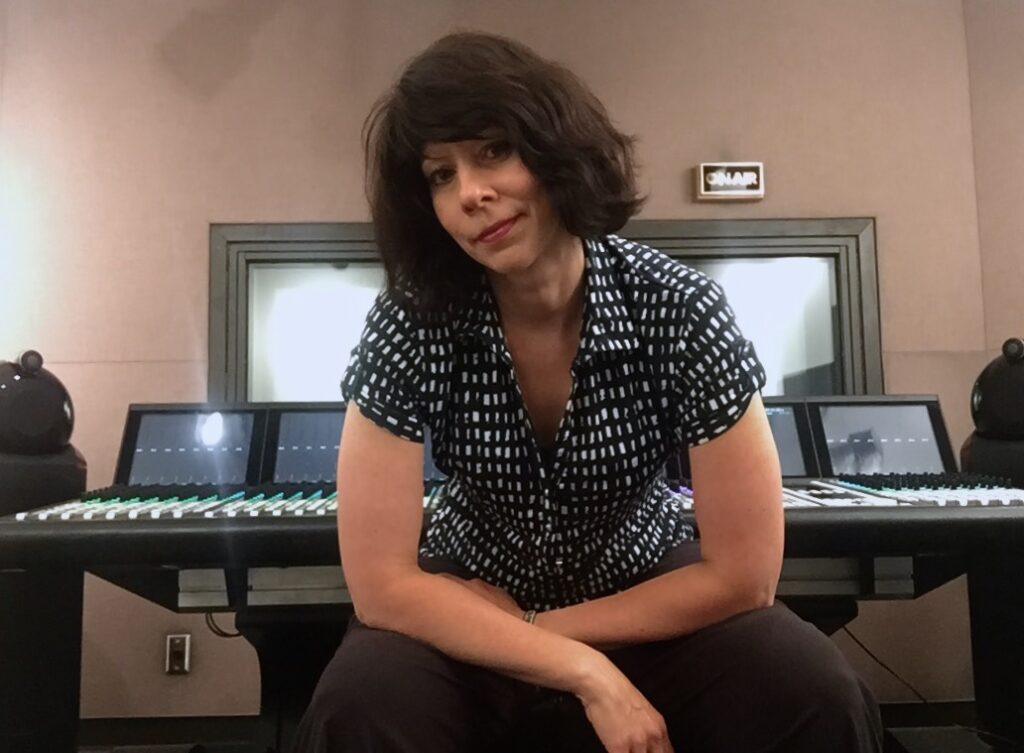 “We don’t hire women engineers, but you can answer the phone if you want.” Mazurek remembers, “That completely blind-sided me. I couldn’t say anything else, other than ‘No, thank you.’” And she hung up the phone.

Mary is a Grammy-nominated recording and live broadcast engineer and works in radio production at WFMT Radio. She also works independently with clients and teaches at Columbia College and DePaul University in Chicago. She got her start at the legendary Universal Recording Studios in 1991. Unfortunately, they also closed in 1991.

With a last-minute request, she engineered the recording of the clarinet concerto for the album Liquid Melancholy: Clarinet Music of James M. Stephenson on the Çedille label. She along with Çedille engineer Bill Maylone were nominated for a Grammy in the category of Best Engineered Album, Classical for the 61st Annual Grammy Awards.

Mary has been at WFMT for 27 years and engineers the Dame Myra Hess Memorial Concert. Broadcasts. She is also the engineer and music producer for WFMT’s signature program Live from WFMT, and is the engineer for Impromptu. She is responsible for the majority of the approximately 225 yearly live music heard on the station.  Her credits include The Chicago Chorale, Civic Orchestra of Chicago Radio Broadcasts, International Music Foundation, LA Guitar Quartet, Howard Levy, The Search etc. 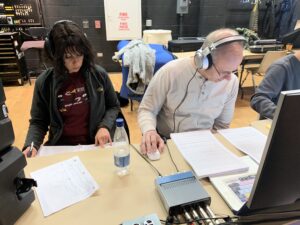 Mary is an active member of The Recording Academy and served as governor and the Classical Task Force chairperson for the Chicago Chapter. Additionally, she is a committee member for the AES Chicago Chapter and a member of the larger organization’s Education and Diversity and Inclusion committees.  Mary is an interdisciplinary artist whose work is based primarily in sound and image, and her work in this realm has been exhibited in Chicago, New York, Mexico, and Berlin. She received her M.F.A. in Interdisciplinary Art from Columbia College, Chicago, IL and is currently pursuing a Ph.D. in Philosophy and Art Theory from IDSVA, Portland, ME.

Mary’s first brush with audio was as a youth when she dissected her mother’s Wollensak reel to reel tape recorder, Mary says “she wasn’t very happy about that.” In 1988, she would enroll at DePaul University as a music major (she began studying piano at age 11), but they also had a relatively new major called Sound Recording Technology. Mary had no idea what that entailed but knew she could do it.

“Even though I possessed no audio background, I fell in love with recording through my undergraduate education at DePaul University. I had a really great experience there, and our recording classes were held at Universal Recording (originally founded by Bill Putnam) under Murray Allen, and Tom Miller.

It never hurts to ask and always be early

“I’d arrive early to class at Universal Recording, and one day I got up the nerve to go into Murray Allen’s office and asked if I could assist there. He said yes, and I immediately started assisting jingle sessions, voiceover sessions, even had the opportunity to sub as an A2 on the Oprah Show on a few occasions because of that relationship. But one of my most valuable experiences was assisting Universal’s only woman engineer Lorita De La Cerna recording Foley for the restoration of Orson Welles Othello.”

The importance of saying No and not giving up

“When I tried to get a job after I graduated, one prominent Chicago studio told me that, “We don’t hire women engineers, but you can answer the phone if you want.”  That crushed me, but I eventually was hired by WFMT Radio as an Occasional Overnight Board Operator, and then I worked my way up. Now I engineer most of their 225 yearly live music broadcasts.” Before being hired at WFMT, Mary found that she could not get one single call back from the studios she had applied at. She soon found that she was doubting her ability to be a recording engineer, doubting her instincts, and just wanting to fit in with the guys. She noticed that her male colleagues were getting gigs, so she would try to be more like them.

The doubt started to re-record her mental tape and it sounded like “You’re a woman, you can’t be an engineer. You’re second-class,”

Mary would pretend like this did not matter, as many women engineers do and continue on until she became physically ill. Doctors discussed diagnoses of Hashimoto’s, Crohn’s disease, and the possibility of lupus.  This was a big wake up call. She realized in order to improve her health; she would have to re-record her mental tape. Mary took charge and began to re-record the tape with a new narrative where feminine qualities like empathy, intuition, compassion, and kindness were strengths that benefited her work.

Excerpted from the speech Mary gave in 2018 at the Recording Academy Task Force On Diversity and Inclusion at the Museum of Contemporary Art in Chicago.

You can read more here

The importance of mentors and saying Yes

I had several mentors. I am grateful to Murray Allen who gave me a chance first to enter into DePaul’s recording program and then to assist at Universal Recording. My teacher Tom Miller who taught me from the ground up. Finally, Lorita De La Cerna for being a female mentor and role model. They taught me how to work with individuals, teams as well as independently.

They taught me to be open and to look for opportunities in every experience.

As her role at WFMT continued to expand, Mary started engineering larger projects. One that she loved was working with Supreme Court Justice Ruth Bader Ginsburg. The live radio broadcast was derived from Ginsburg’s Opera and Law Lecture with members Lyric Opera’s Patrick G. And Shirley W. Ryan Opera Center. These talented vocalists along with collaborative pianist Craig Terry performed famous operatic scenes that dealt with law and justice.  WFMT’s sister station WTTW simultaneously shot video for a segment on their program “Chicago Tonight” using Mary’s audio. One of the cameramen commented, “Your audio is the best audio that we ever receive.”

Again the Importance of saying Yes!

In 2018, Mary got a last-minute call to record The Lake Forest Symphony Orchestra with clarinet soloist John Bruce Yeh, both of whom she had worked with several times. Taking the gig meant making a major equipment upgrade on her part, but she took the gig and the concerto along with chamber music recorded by Cedille’s engineer Bill Maylone became Liquid Melancholy: Clarinet Music of James M. Stephenson.

When Mary heard the finished production, she entered it for Grammy consideration. She thought that the soloist might be nominated as he had won in the past, but when the Grammy nominations were announced she found that she and Bill had been nominated for Best Engineered Album, Classical.

The Grammy nomination has given Mary the opportunity to be more selective on the work she takes but is still at WFMT, Columbia and De Paul. She is dedicated to mentoring women in the field, volunteering her time with SoundGirls and AES, and dedicated to speaking about her career and diversity and inclusion in the industry.

A typical day for Mary

The great thing about it is that there isn’t a typical day. Some days I will go out for a remote and broadcast live music on location, other times it’s a live broadcast from the WFMT studio. Some days I work with a video crew, others there’s post-production. I also write and produce web content for WFMT.com. I teach audio recording and production once or twice a week depending on the semester. I generally don’t go looking for freelance clients, but if someone approaches me with an interesting project, I’ll generally work with them. I am occasionally asked to speak or give masterclasses on recording or podcasting. And I’m writing a Ph.D. dissertation on the aesthetics of noise, which includes some examples on how it is utilized in art and music.

I think part of it is due to a sense of responsibility instilled in me at a young age coupled with loving the work. Also, if there is something that I really want to do, I just figure it out. 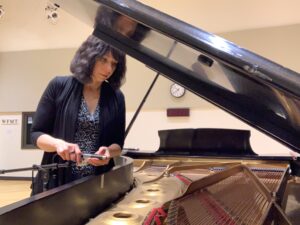 I love microphones! I love placing and adjusting them and noticing how that changes the sound and recording with them.

To win a GRAMMY Award. I’m getting closer. Better my health. Finish my Ph.D. Continue to support women in this industry.

I was told in 1991 by a prominent Chicago studio, “We don’t hire women engineers, but you can answer the phone if you want.” It wasn’t only the shock of being told that, but I began to doubt my abilities and worth as an engineer.

I also have a stubborn, “I’ll show you” side. I’m very determined, so work really hard to improve myself, or as Steve Martin said, “Be so good that they can’t ignore you.”

This might be the best time to enter the industry because there are growing diversity awareness and initiatives to help women and non-binary identifying people. SoundGirls is doing great work in this area. But you still have to be diligent, do your best work, and figure out how to improve.

In my specialty of classical music, you must know how to place microphones and follow a score.