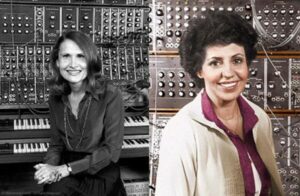 Where would electronic music be without Wendy Carlos?  Carlos’ 1968 album Switched-On Bach brought the Moog synthesizer (and electronic music) to the public eye.  It was popular enough to win three Grammys and become the first classical record to go platinum.  With her influence, the 1970s became saturated with synthesizers from disco to advertisement jingles to Progressive Rock.  The influential soundtracks of A Clockwork Orange (1971), The Shining (1980), and Tron (1982) also came from her hand.

Carlos was a pioneer in other ways too.  In 1972 she became one of the first public figures to undergo gender reassignment surgery and speak openly of it.  Gender dysphoria was something that Carlos was aware of at an early age, but it was not until 1968 that she started her transition.  The success of Switched-On Bach was both a blessing and a curse, as it made surgery available, but Carlos performed publicly as a man throughout most of the ’70s.  It was in an interview with Playboy magazine published in 1979 that Wendy Carlos finally disclosed her true self.  There was no public backlash, and Carlos’ main regret was that she had not come out earlier.

Wendy Carlos, a pioneer as she is, still relied on her friends to help her achieve greatness.  In 1966 Carlos met aspiring jazz singer Rachel Elkind-Tourre.  When she heard Carlos’ synthesized experiments of various Bach pieces, she brought forward the idea of a full album.  At the time Elkind-Tourre was working as an assistant to the President of CBS and used her influence to help pitch Switched-On Bach to the company, and later used her connections to provide studio space for Carlos.  With this first collaboration, Elkind-Tourre became a frequent contributor and producer of Carlos’ albums.

Not much of Rachel Elkind-Tourre’s private life is known.  Around the time she met Carlos, she had recently moved from San Francisco to New York City to pursue a career as a jazz vocalist.  It is this jazz background, and vocal training gave Elkind-Tourre the perspective and tools to be Carlos’ trusted co-creator.  Together they created Trans-Electronic Music Productions, Inc. (TEMPI) with Benjamin Folkman, another of Carlos’ collaborators.  In 1980 Elkind-Tourre married and moved to France, and ended the official partnership between the two.

The legacy of this friendship can be heard in the majority of Wendy Carlos’ albums.  Elkind-Tourre’s voice (through a vocoder) adds texture in Sonic Seasonings (1972), and her compositional influence is integral in The Shining.  Carlos does note that Rachel Elkind-Tourre is one to avoid fame and credit, which is a shame.  This is a story of women empowering women.  Their friendship should be celebrated, not just for the works they created together, but the barriers they overcame.