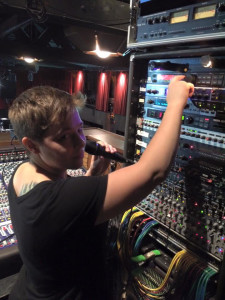 Tiffany Hendren was one of those kids that listened to the teacher with one ear, and had music playing in the other. Her hair hid the headphones of the CD player shoved into her backpack at her feet (yes, it was the 90’s). There was one CD; Aenima by Tool, that she listened to so many times that the disc stopped working!

Listening to music was (and still is) about feelings for Tiffany. She explains that music to her is like a rollercoaster of emotions elicited by a really great album and her mixes are based on these feelings that she gets to share with the audience.  As a full-time sound engineer, she is involved in making people feel the emotion in the music the way that she does, albeit a little differently. Whether it’s pushing up the fader for a particularly awesome guitar solo or dialing in the perfect vocal effect for a more intimate song, it’s hugely rewarding to watch people experience the music instead of just listening to it, and know that she has had a part to play in that.

When she was at school she was pretty set on being a performer – the kind of performer that made people feel the way she felt when she listened to a song. However, she was well aware that she had no actual talent to speak of, aside from a halfway decent singing voice, and taking lessons of any sort was out of the question. It was her sophomore English teacher who opened up the world of sound to her by assigning her to do a report on what she wanted to be when she grew up. Tiffany still badly wanted to be involved in the industry, but her perceived lack of talent started her researching the other types of jobs available.

Her other interests were mainly in computing and electronics, so the tech side called out to her pretty loudly. At first she thought of engineering in a studio, but then she found out that live sound engineers existed.  Growing up in a small rural-ish town, she had never been to a concert or any major experience and had only seen that type of event on TV. It never occurred to her that anything really went on behind the scenes, so to find this out was pretty exciting and the idea that she didn’t have to be on stage to be part of a live show was SO exhilarating. When she started going to concerts regularly, there was nothing more she wanted than to do live sound.

The next ten years took Tiffany in another direction. She joined the military and worked a couple of office jobs, because having money was sort of a priority at the time. She also spent a fair amount of time working for a local/regional rock band, organizing the street team and doing merch and some light tour managing when they were on the road. Tiffany’s experience from the office jobs really paid off for this role when it came to paperwork, organization, and time management. At the same time she was taking classes for a degree in Public Relations – her fallback career choice was music industry PR. Looking back, Tiffany is convinced this is something she would have hated, so she is rather pleased she didn’t follow that path.

In late 2008, Tiffany was laid off from her last office job, starting a new direction in her life and leading her back to her first love. She started working in the coffee/merch shop of The Pageant in St. Louis. After a few months, an audio intern position opened up and Tiffany grabbed it with both hands. She spent the next year and a half interning in The Halo Bar, a 150 capacity venue attached to The Pageant, as well as reading and watching everything audio-related she could find.

Working in The Halo Bar involved a lot of what Tiffany refers to as “combat audio”. The gear is decently maintained, but as the gear is older things are more likely to break at the exact worst moment, which gave Tiffany the best experience in troubleshooting. The internship also offered the opportunity to learn skills in a lower-stress environment. When The Pageant’s full-time monitor engineer moved on to a new venue, Tiffany was offered his position. While not being exactly qualified, her boss had faith in her and within a few months, it was relatively smooth sailing. 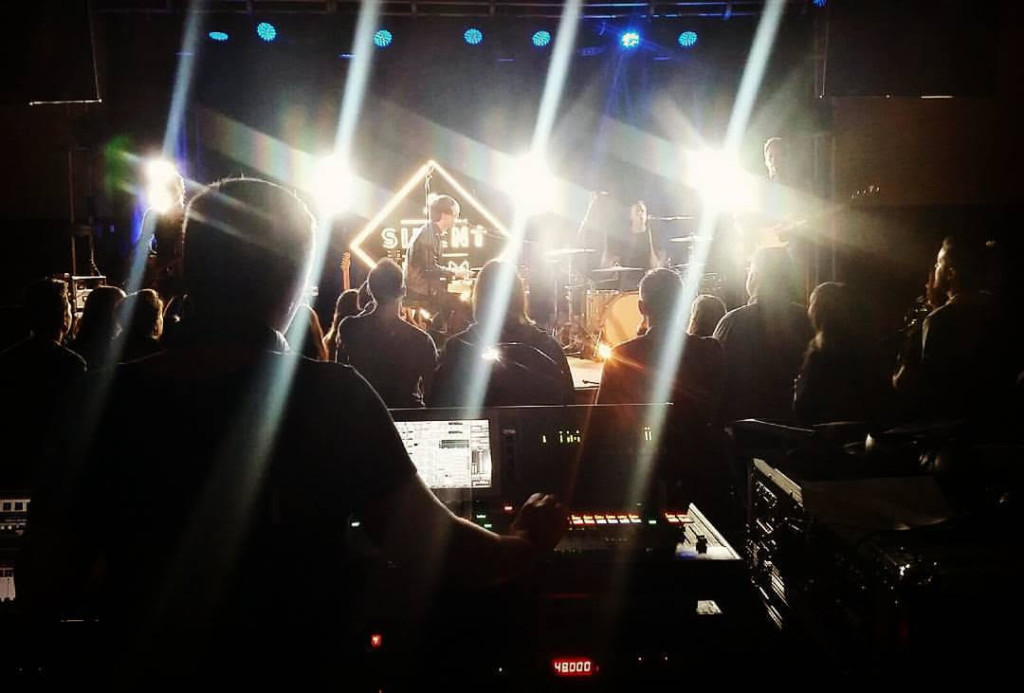 The gear at the Pageant is all analogue at the moment. They have a Midas XL250 for monitors and a Heritage 1000 and two giant racks of outboard gear at FOH, and they all work!  Tiffany loves the sound of the analogue Midas compared to most of the digital desks that are out there, but the venue is aware that it’s not the most convenient for visiting monitor engineers who don’t travel with a console. Eventually they will go digital, at least in the monitor world, but Tiffany thinks they are secretly waiting for something tragically sad to happen to the XL250 first!

If you ask Tiffany what her favourite desk, PA, piece of outboard gear, etc. is, she will quickly tell you that it’s whatever is available and working properly! When touring with A Silent Film, it’s desk du jour. Some of her favourite shows have been mixed on an M32 from an iPad. Getting back to the feelings that music produces, Tiffany really enjoys mixing from the crowd instead of FOH – calling it unconventional but she personally enjoys the show a lot more, and likes to hear exactly what the fans are hearing. Plus, the bar seems to be exactly where the FOH should be in a lot of smaller venues, and she thinks it’s nice to not be stuck under a stairwell or against a wall at the back of the room.  Tiffany tells us that it definitely helps that the iPad app for the M32 is surprisingly well done. If she had an endless budget, however, she would definitely prefer the DiGiCo and Midas Pro series desks.

The Pageant is currently in the process of deciding on consoles and PA for their new sister venue, the 800 capacity Delmar Hall. Tiffany will be the FOH engineer when it opens. She’s also continually learning and this year is taking a few classes that she is excited about – SMAART training and a stage electrics class. 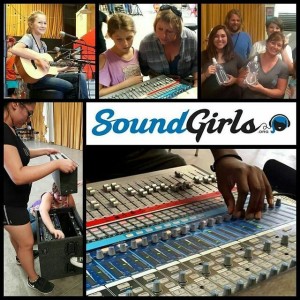 Mentors played a huge part in Tiffany’s learning. The Pageant’s FOH and monitor engineers, Randy Noldge and Adrian Silverstein, really took her under their wing when she first started learning sound. Tiffany says she wouldn’t be where is today without their patience and willingness to teach. Also, Tiffany looks up to and really admires Soundgirls.Org co-founder – Karrie Keyes saying “she’s one of the most driven and productive people I’ve ever met. I have absolutely no idea how she gets so much work done every day”.  Tiffany says Karrie is a living embodiment of the DIY mindset – Karrie will say – “Don’t know how? Figure it out, and then go do it.” Plus, Tiffany declares Karrie is an excellent teacher, and Tiffany really enjoys being involved in the live sound camps with Karrie.

Tiffany has experienced some discrimination working in a lot of male-dominated workplaces and industries, saying “you can always run into the odd sexist remark or behavior no matter where you go, but I’ve been mostly lucky with my jobs”. Tiffany would like to stress here that the majority of people that she has worked with in this industry are awesome and treat her like a human being, however she finds that most of the bad experiences are confined to other crew members. She has run into a person or two that “just doesn’t work with women”. One memory that remains is where one crew member even tried to have her sent home and she has definitely had a few people get a little too touchy-feely. One guy in a town wouldn’t let her mix the band who had hired her – he wouldn’t even speak to her! On tour, it takes longer than expected for some house engineers to warm up. Tiffany’s solution is to just get the job done, saying that once they see her pushing cases and setting up drums, they’re suddenly much friendlier.

Tiffany has actually lost tour work by being a woman, with excuses like “We’re just a bunch of guys, you wouldn’t fit in with us,” and “The band’s wives wouldn’t be comfortable with a woman on the bus”!!! On top of that, some guys have the idea that women are mainly interested in working in the music industry so they can date guys in bands.

The idea that being female is a setback is not only confined to the music industry, though. Women have to work harder and be better at their jobs, flawless even, to get the same recognition and reputation, and for less money.  The band Tiffany is working with at the moment were shocked that this attitude exists, as it had never entered their minds that working with a woman would be any different than working with a man.

Sometimes she will have a show to do that has previously had women working for them and will hear comments like, “Oh, the monitor engineer is a girl, we’re gonna have a good night!” At this point, Tiffany has just introduced herself and hasn’t lifted a finger but somehow, everything is going to be awesome. It makes her happy to think they have encountered other women out there that are awesome and kicking ass, making her job easier.

Tiffany’s message to young girls coming into the industry is “take physics, math, and music classes. Don’t put up with any nonsense and don’t let anyone tell you that you can’t”. She recalls reading an article posted by SoundGirls about how men are more willing to take a position they’re not fully qualified for and figure it out as they go, and women feel like they have to know the skills 110% before they even think about applying.  This really made her examine how she’d been approaching her career, as she had always felt that she was being judged extra hard because she was female. Whether that’s true or not, she felt she had to be perfect all the time with no mistakes, ever. That meant that she didn’t take a lot of chances on things she wasn’t sure about – her mantra being  – If you don’t know every little thing about how that piece of outboard gear works you had better not touch it until you do hours of research!

Tiffany says that when she started, there were no women around her on a regular basis until she discovered SoundGirls.Org, and she could count the number of female sound techs she’d met in the previous five years on less than two hands. Also, she had never seen a woman behind the board at any show she had attended. She states now that if she’d had a group of like-minded women as mentors, she would have been so much more comfortable asking questions, experimenting more, and generally taking more chances. 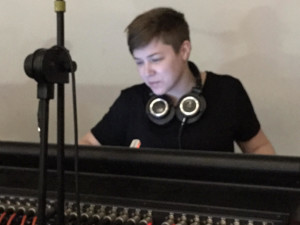 Tiffany is currently the monitor engineer at The Pageant in St. Louis and tours with the band “A Silent Film” doing FOH. She has been involved in sound professionally for around seven years, full-time about five. Tiffany became the co-director of SoundGirls.Org in August 2015. She also co-produces an annual invitational motorcycle showcase in St. Louis, MO – Cycle Showcase STL. When she gets some time – her other hobbies include crocheting scarves that never get finished, cross-stitching bad words onto things, learning to actually ride her motorcycle, and finally taking guitar lessons.