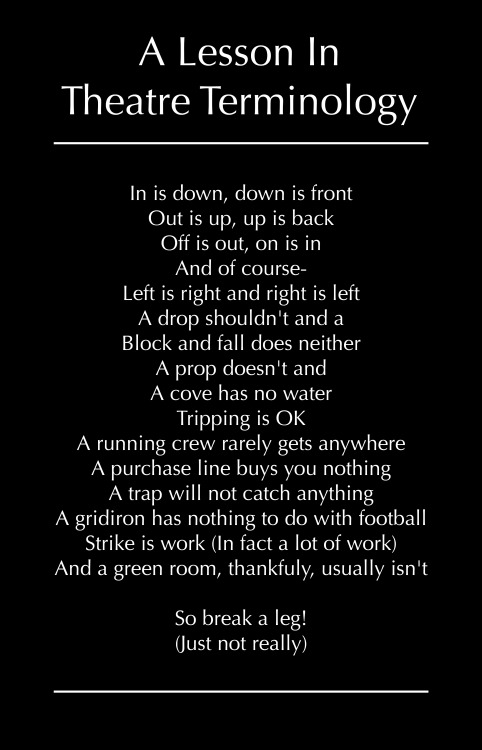 Often in my job, I end up being the middle person. I don’t own the contract with the band, but I have to fulfill the requirements. Sometimes I get a say in what is allowed in the rider, other times I get to deal with cross renting items late in the game because I didn’t see the completed contract until the day before. I get to communicate with the band the possibilities for their show but must get all changes approved by the purchaser.

I’m sure many of you deal with people like me while on tour where others are in the same position as venue operators. I would like to point out that being the middle person has also given me an interesting aspect of my job that I tend to forget about the most: The Translator.

Frequently, I end up translating the tech lingo for students that have never read a rider before. I also spend time translating everyday words into tech lingo for groups to develop their riders for the contacts. I help bands create their input lists and stage plots so they can send them to the purchaser to be included in the contract. Sometimes it’s even for the band that my purchaser is currently working on contracting for the show I will run.

I often forget how much I have already learned over what I feel is a short time in the field.  Stage plots, riders, and input lists are second nature in my word and so is a backline, rigging, and line array. I often forget when a new student is working on the contracting side of the world they may not know what backline means, and quite often they assume it’s something simple that I’ll just have on hand.

Outside of translating the contract lingo I also spend a lot of time translating industry lingo too.  Just the other day, I was trying to teach some students when to recognize the right time to let their hands go after a setup was completed.  To my surprise, they all looked at me like I was nuts.  “What do you mean let your hands go?” I had completely forgotten they had not heard this term before, and that to me it was second nature. So I found myself saying it again, but catching myself explaining that hands were another name for the staff working just the setup that should be done with their shift.

Shortly after that conversation, I began to think about what other words do I use that might not make sense to a new staff member. Here are some that came to mind right away: upstage, downstage, FOH, pickle, or even backstage.  There are hundreds more, but you get the idea.

If you need a refresher, here is a great article to read that has a good starting list of industry terms:

Pro Production: Understanding The Language Of The “Show.

My point is that even I, someone who is constantly translating and teaching people the many aspects of the production world, forget some of the basics. I forget that at one point I had to learn this too and what if someone hadn’t told me about it? I may have messed up and thought JBL was pronounced Jay-bell or FOH was pronounced as Foeh. Wouldn’t that be completely embarrassing! (Believe it or not, I’ve actually experienced people saying these examples.)

So I ask you, what is something you learned early in your career that you take for granted? What is something you forget to translate to someone newer than you?  Signal flow, gain structure, cable wrapping, or what about how to set up a mic stand properly?

Based in Saint Paul, MN; Heather has held many positions in the sound, production, and events business. Most recently as a Production Manager serving the Twin Cities area. She holds a BA in Broadcasting and Digital Media Communication and an MS in Organizational Change Leadership. Prior to taking a position with a private production firm, Heather has over seven years of working in higher education dealing with event logistics and production technology and had also been freelancing in the field for several years.

Read Heather Holm's Blog
Browse All SoundGirls Contributors
We use cookies on our website to give you the most relevant experience by remembering your preferences and repeat visits. By clicking “Accept All”, you consent to the use of ALL the cookies. However, you may visit "Cookie Settings" to provide a controlled consent.
Cookie SettingsAccept All
Manage consent