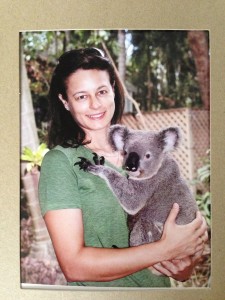 When you have a chance to work with and learn from the best, you set your standards high.  This was the case for Suzy Mucciarone on her very first tour, in 2001 with Neil Diamond.  Starting out as a stage tech, and moving on to co-systems and PA Fly tech on later tours, Suzy had the opportunity to work with people who she believes displayed the standards in audio and conduct that should be achieved on all tours.  She has worked hard to reach and exceed those standards ever since and has spent more than a decade working for Baltimore based Maryland Sound International.  However, the path that led Suzy to a career in Live Sound started many years before, and on the other side of the globe. 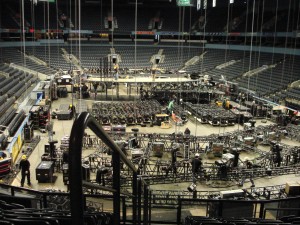 Perth, Australia
A high school requirement, to organize a week of work experience, led Suzy Mucciarone to one of Perth’s two top 40 radio stations. When she completed her workweek, Suzy kept in touch with the station, returning occasionally to spend the day.  Shortly after graduation she was offered a position of ‘carting’ which, at the time, was the junior position to production.

When Suzy began working there, she recalls, “the station was still AM, soon to be FM, and largely resembled an episode of WKRP in Cincinnati”.  The modest studio housed an 8 track Studer, and “well used and abused, 16 channel Soundcraft, that you had to hit in certain places to get the occasional weird noise to go away, or patch connection to work”.  “We actually managed to shut down all the power to the room one time, when a coworker accidentally clipped the side of the console with his Doc Martin.”  Once the station gained it’s FM license it underwent a total overhaul making it the most up to date, digital, on air and production studio in the country for that time.

Through her position as production engineer at the station, Suzy had the opportunity to see almost every tour that came through town.  Her work with presenting concerts, soundcheck parties, sitting in on interviews with artists, as well as meeting many of them, helped her make the decision to move into the area of live sound.  “I love the energy of a live show.  It was never really a consideration until then, because there were large differences in knowledge and technology at that time in Australia, compared to the USA or England.  Quite simply, we were lagging behind.  I also knew that to move into live sound/touring in Australia, I would have to pack up and move to the east coast.  Even then, I would only be temporary, local crew to overseas tours, and I knew I wanted to be further up the food chain than that.”

Circumstances would soon provide the motivation for her next step.  A change in ownership turned the radio station into a very unhappy place to work, and while on a long overdue holiday trip to the U.S., Suzy discovered The Institute of Audio Research in New York City. Less than six months later, she decided to return to attend the school. 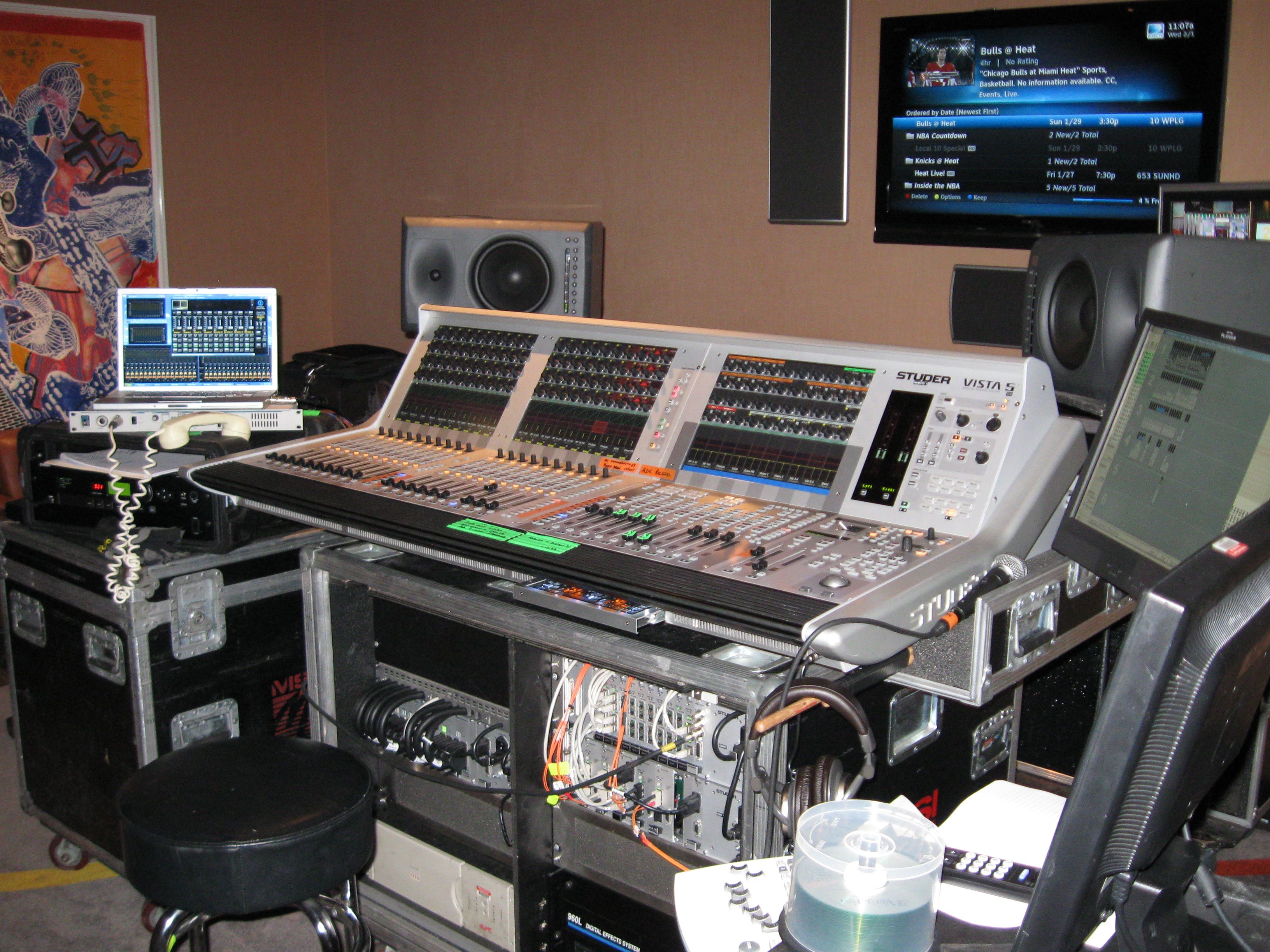 Baltimore, MD
Suzy began working full time at Maryland Sound International in August 2001, roughly six months after graduating from the Institute of Audio Research.  In her position as a senior A1 Audio/Systems Engineer at MSI, having now worked for the company for the past 12 years, Suzy is well versed in all areas of sound reinforcement.   “In the corporate world, from basic podium gigs to large formal dinners with high end feature bands,  events on the National mall with tens of thousand of people , to being the broadcast engineer on nationally aired events, I have been fortunate to find myself doing it all over the years. From designing and putting a system together, getting them in, up and running on site, then running either FOH or Monitors (and sometimes both), I’m happy to say I can jump in anywhere.  And while I admit that touring is my first love,  I’ve done a ton of corporates and I have learned a great deal about audio in doing so.” 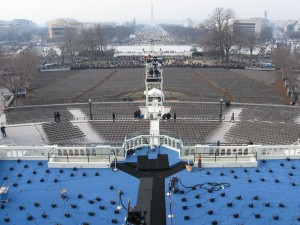 On that first tour with Neil Diamond, Suzy was working as provisional crew and was able to work with a well-seasoned crew who had been together for many runs.  All were very secure in their abilities and working together in a happy environment, where the tour looked after its crew very well.  Things were well planned and organized to make the day from load in to load out as efficient and painless as possible.  One of the key factors was excellent communication and professional interactions in the work environment.

When it comes to touring, Suzy tends to lean towards monitors as her preferred gig. “Although working for the size company that I currently do, by the time tours end up here  the tour already has their engineers so the opportunity to step into those gigs in that position are rare.”   She’s been FOH tech/Systems Engineer for many major tours including: Hall and Oates, Seal, Josh Groban, and Linkin Park, and generally ends up mixing FOH or Monitors for support acts as well. 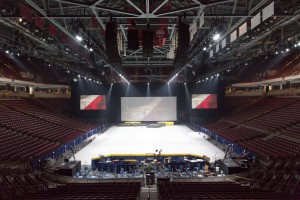 She’s also no stranger to challenging gigs and situations. Suzy had the pleasure of being FOH and Systems Engineer for the “Spirit of America” tour last year.  Spirit of America was an in the round, arena performance profiling the history of the US Army.  All of the performers were enlisted, 30 or so of them on headsets, as well as the fully live, United States Army Band “Pershing’s Own” Orchestra, making up approximately 150 odd inputs.  A Soundcraft Vi6 handled FOH Production with a Studer for the orchestra, and one PM1D for monitors.  The floor of the arena was the performance area, complete with horses.   PA was a 270° Arena hang with a separate Surround Sound PA for special effects. 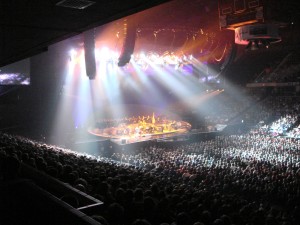 Suzy has done several tours with Josh Groban, which included a string of shows at the Sydney Opera house where she says, despite having to cram all of their gear into the opera house, the Aussie crew made it as painless as possible.  She started with Josh Groban in 2004 as a stage tech and moved on to Systems/Fly/Foh tech on later tours.

Some other touring highlights include: Hall and Oates- “I did a couple of years touring with them and it was a great run.  The band and crew were fantastic and they still sound better than ever.  I started as Stage tech/Fly, moved on to Systems/Fly, and mixing FOH or Monitors for the support acts.  It was also the first gig that took me to the Bahamas.  It was a gig at the Atlantis Resort.  I happily blame them for my love of the island, and oddly enough, the best Italian restaurant  I’ve found yet, Cafe Matisse, is there.”

She loves to spend her days off being a ‘tourist’ with a passion for Zoos, Aquariums sightseeing and outdoor fun. Finding a great restaurant where she can enjoy a lovely meal and glass of wine is always a treat.  Touring with Seal (Systems/Foh tech), gave her the chance to experience places in Europe she never thought she’d get to, including the white nights in Tallinn, Estonia. 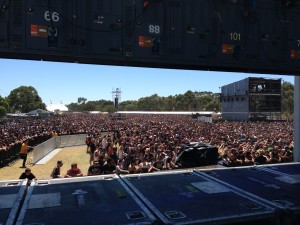 Earlier this year Suzy handled System Engineer/Foh tech duties for the last leg of Linkin Park’s tour, working closely with Ken “Pooch” Van Druten, who she says does an “absolutely jaw dropping job of mixing the band”.  The tour made stops in Australia and New Zealand and the crowds were massive.  It also gave her the chance to visit the Lone Pine Koala Sanctuary.

When asked what she likes best about touring, Suzy says, ” I love touring!  I’m one of these people who love being on the move and traveling.  I love the energy of a live show and the consistency and order of a well put together tour, although some tours are far better than others, this is very true.  Even living on a bus with a bunch of people for a while, it’s a great way to get to really know someone.  There is nowhere to hide.  Everyone falls out of their bunk with bed hair.”  And what she likes least- ” I’ve had to trudge through a couple of bouts of food poisoning and that was miserable.  I don’t think too many on the road haven’t experienced it at some point.  Being unwell on the road is tough no matter what the ailment.  I also have very little time for individuals who are unpleasent, they can drag an entire tour down.   Good people skills and common courtesy is a must.  When you’re living on a bus with 10 others, you’re living in each other’s pockets.  You have to be mindful… and clean up after your self .” 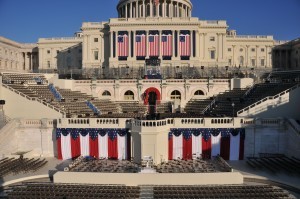 Advice for women wanting to enter the field of Live Sound- “Know your craft better than most because the rules are different.  Unfortunate, but true.”  People skills are essential as well.

Suzy’s ideal tour would schedule days off near Wimbledon, The Australian, French or US Open, with a fabulous brunch.  And as for her favorite gear- “Dolby/Mesa units.  You will pry these out of my cold dead hands…”