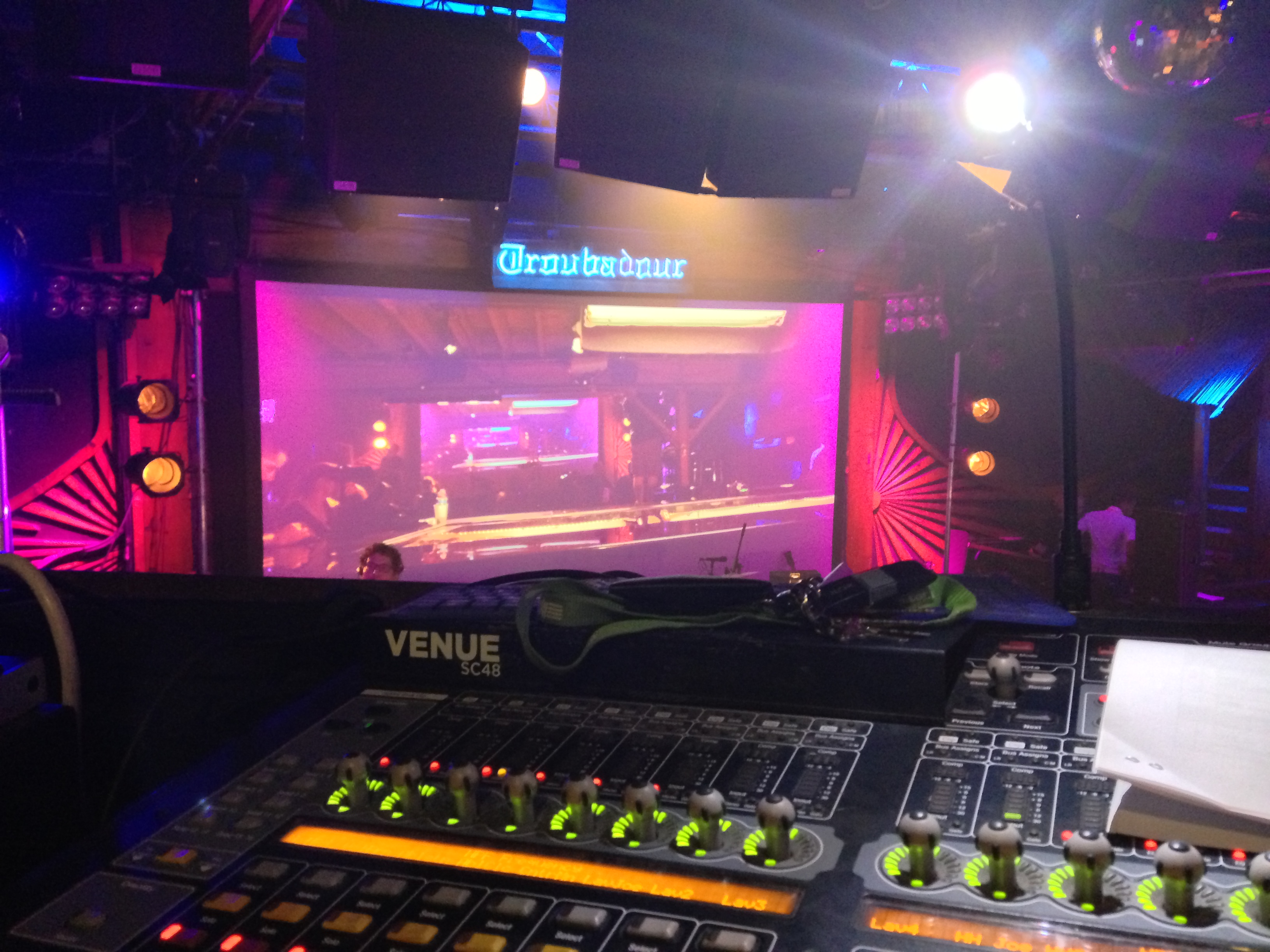 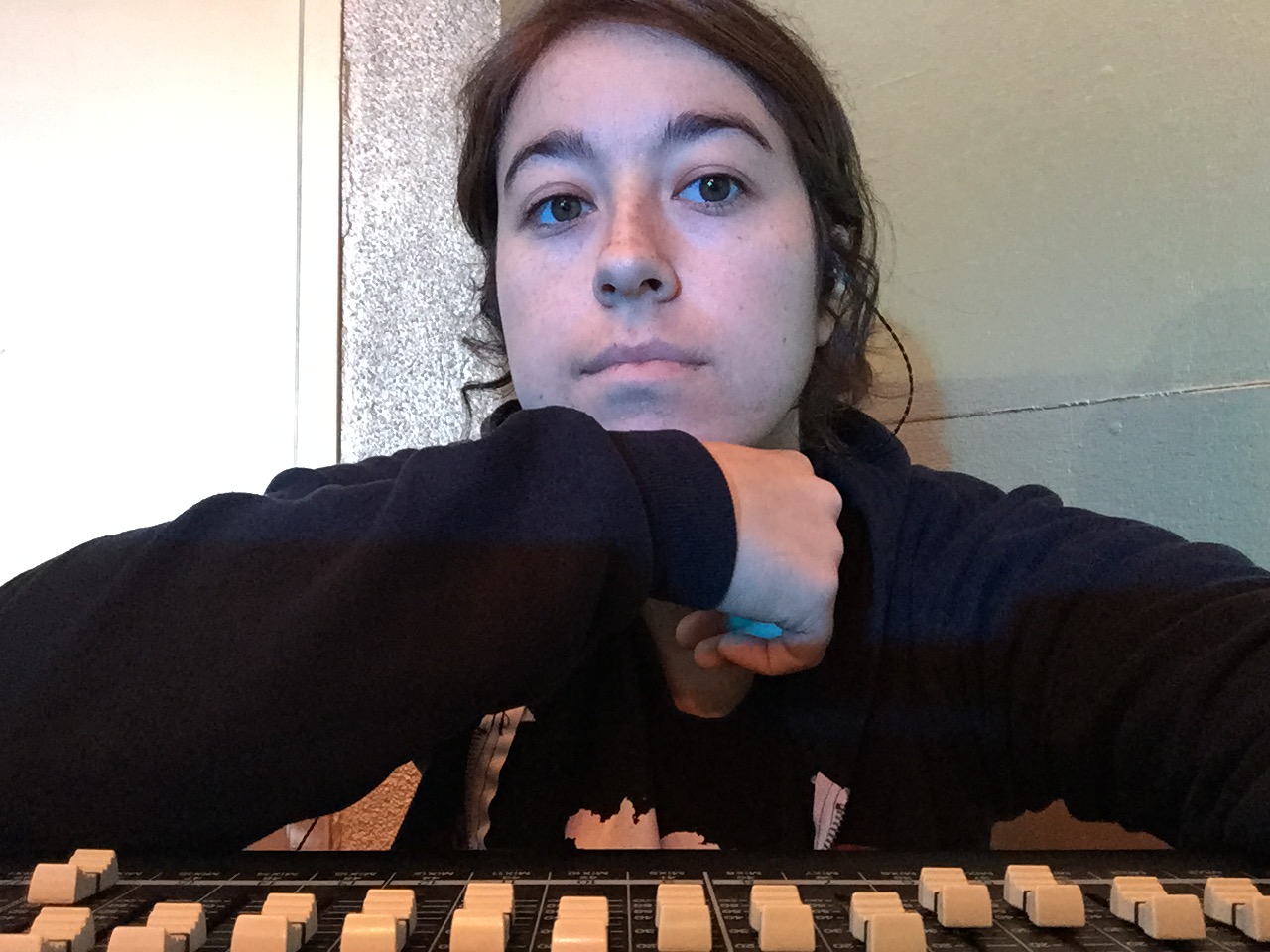 Megan was introduced to music in elementary school and formed a band when she was 15. While she initially put music on the back burner to focus on a communications degree, she found that music was her passion and switched her major to songwriting. While working in AV at Cal Poly Pomona, Megan discovered live sound.

In elementary school, Megan learned to play the clarinet and viola, and at age 15 she found her mom’s old guitar. The guitar only had four strings and would not stay in tune, but Megan was hooked. Megan got her first job and saved up to buy herself a guitar and staying home on weekends to teach herself how to play. (parents take note) Eventually, she started a band with friends. 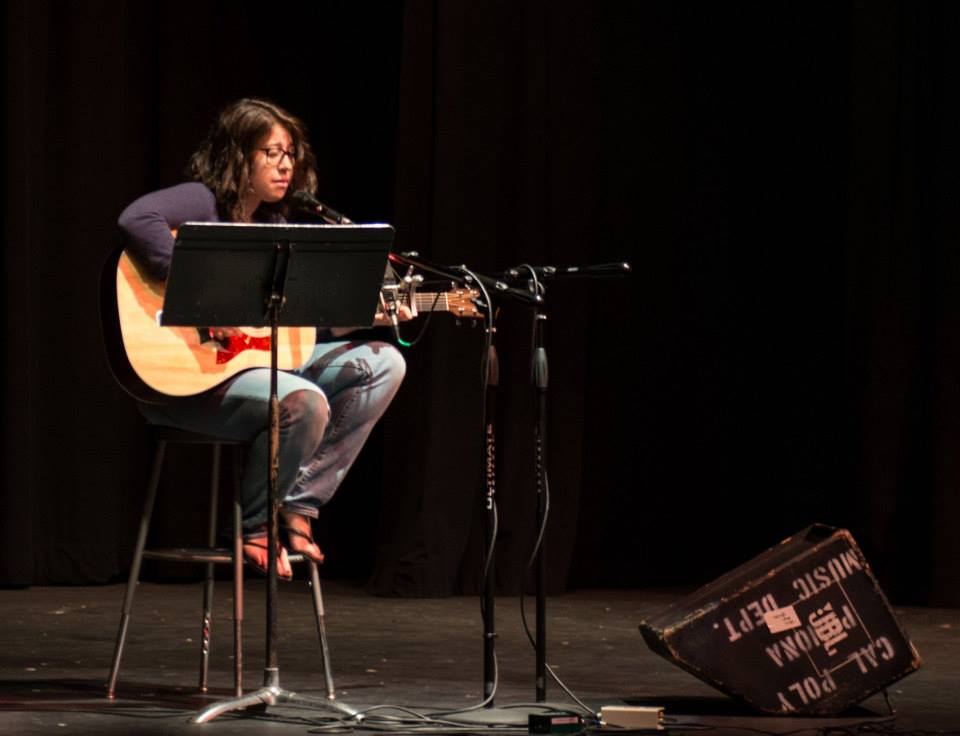 After high school, she kind put music on the back burner and went to college for communications. Eventually, Megan realized that music is what made her happy and that she needed to follow that passion. “I switched my major, and was very fortunate to receive some scholarships and endowments in songwriting, which really helped to build my confidence and solidify my decision”. While Megan is most proficient on guitar and vocals, she LOVES to play the drums. Her ultimate dream would to be a drummer in a band.

While at Cal Poly Pomona Megan took audio studio classes and worked as an AV Tech. The studio classes and AV Tech work complimented each other Megan feels that “studio classes helped me understand audio before delving into AV work, but I was doing both simultaneously, so I think my live experience actually helped my studio experience more”. The opportunity to be in a more controlled (studio) environment allowed her to hone her listening skills in terms of sounds and frequencies and it was valuable to learn how to patch outboard gear and understand signal flow. Megan graduated with B.A. in Music.

Megan then got the opportunity to intern at The Troubadour working her way up to FOH Engineer. During the internship, she got hands-on experience mixing, learned how to navigate and utilize a digital console, and learn her own workflow in terms of mixing. Megan has also learned how to work with different microphones and how to really listen to a room. “The Troubadour is very ‘live’ sounding because of all the wood and concrete floors, so you can really hear differences in sound”. How the size of an audience affects the sound and how to adjust your mix.

Maybe the most important aspect is the number of engineers passing through the venue, allowing Megan to learn different styles and sounds while being able to network and connect with engineers from around the world. Megan feels that she would not be where she is without the experience gained at the Troubadour. “I have learned how to deal with a vast array of people, whether they be the artists, crew, or tour managers. I have learned how to mix different bands. Knowing the difference in the sound of the kick drum for a metal band vs. a folk band, or the amount of compression to use on a pop act vs. a country singer. I have learned how to deal with stage volume, and how to mix using it, rather than just fighting it. I have also had the chance to experiment with different mics and sounds. Sometimes, if a guest engineer comes in with a certain mic choice or placement that is new to me, I will try it out the next time I mix”.

In the past year, work has picked up for Megan, allowing her to branch out working with different venues and equipment. While she prefers doing FOH she finds herself behind the monitor board on a regular basis. During the summer months, she works as the Monitor Engineer for a non-profit called Levitt Pavilion in MacArthur Park. The Levitt Pavilion is a non-profit organization that encourages community involvement by throwing 50 free concerts in the park every summer. There are six venues nationwide, and the non-profit continues to grow each year. Megan got involved with the organization in 2014 after a friend who was doing FOH, recommended her for monitors. After a successful 2014 season, they invited her back for the 2015 season. 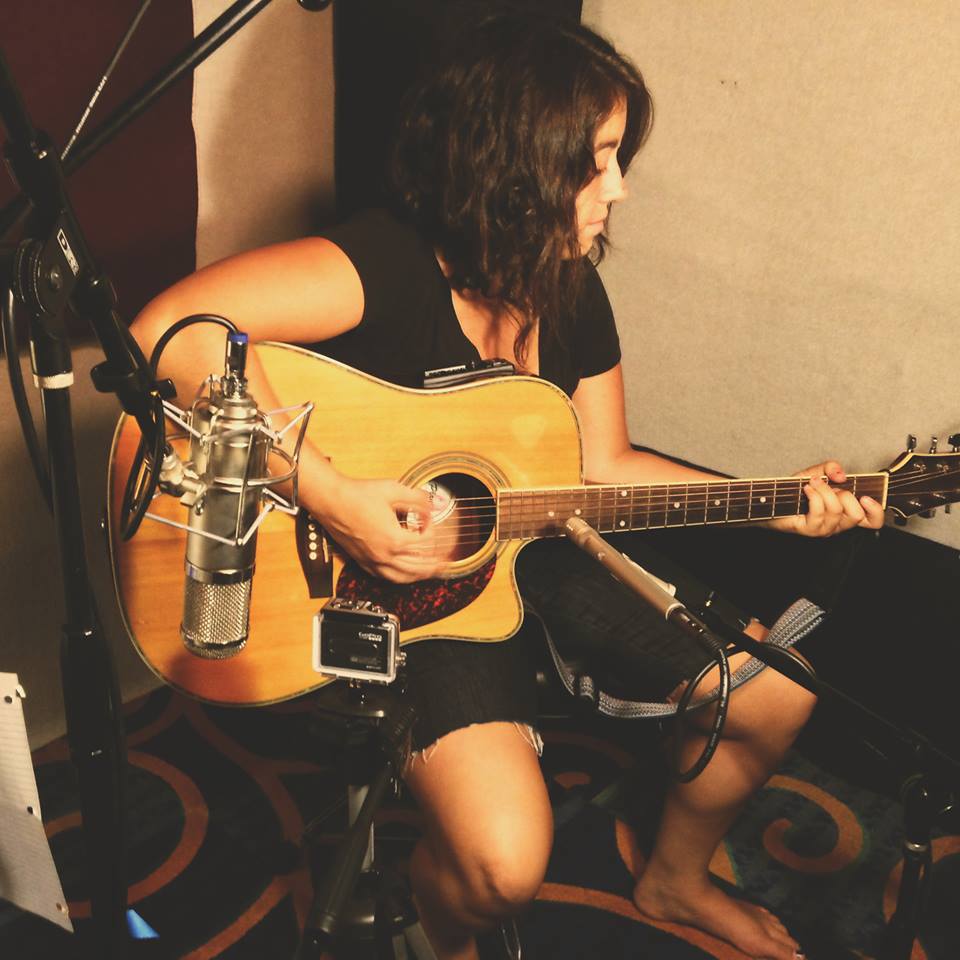 Megan is currently tracking her own album, tentatively called Sad Songs for Happy People, under Megan Michelle Bird. While the material is her own, it is a musical collaboration with her friends, which she says are amazing and talented. “I originally started tracking it with my friend, Kyle Berzle (who is also a great FOH), while in college, and now that he is off touring, I have been working with producer, Kayhan Ahmadi. It is a pop/folk album that I am very excited about and getting it out there. If at all curious, I have a few rough tracks on soundcloud.com/meganmichellebird

I asked Megan what her plans for the album are “That is a great question that I am still figuring out. At this point, I just want to finish it and print some physical copies and hopefully sell some digital ones. More than anything, I am excited to be able to use it as a reference to my songwriting style, which I want to spend some more time focusing on in terms of working with other artists and producers. But for now, one step at a time”.

I like the days where I work with a band, and there is an instant connection, and then the mix falls into place, and the audience is just loving it, and it all just feels so satisfying and perfect, and then you pack up and do it all over again, not knowing what the next day is going to bring.

I would say that I like the instability of live sound the least. Sometimes the struggle of it is just too real.

I want to get into the touring game, and eventually, be working as an engineer for a select few artists. The community and family that can be built between a crew is one of my favorite things. I also want to buy some land and slowly work up to building an animal rescue, so when I am ready to give up the road, I can settle down into that life.

Luckily, I have been very fortunate to work with a majority of people who have supported me, but there are definitely days when guest engineers or musicians automatically assume that I am hospitality, or don’t bother addressing me as a peer. I do find myself having to work harder than my male counterparts to earn respect, but I feel like most people who notice really appreciate that about me. There have also been a few times where being a woman has hindered me from getting a touring job because the guys don’t want me “cramping their style.”

The only way I know how to deal with them is to just keep going. I am a reckless optimist when it comes to the idea that hard work and a good attitude will get you a long way.

Advice you have for women who wish to enter the field?

Do not be afraid to be assertive and make yourself heard. It can be intimidating when the chances are you will be the only woman in the room, but I find that most people will respect you more for it. Also, say yes to new opportunities, and surround yourself with a network of people you can trust. Most of your work will come from recommendations.

It depends on the band, but one of my favorite combinations is a Boss RE-20 Delay, Big Sky Reverb, and a Distressor.

If this is what you want to do, continuously find ways to be a part of it. I find myself always asking questions and volunteering my time just to keep learning. It is hard work, and my social life is non-existent, but it is worth it to me to keep expanding my horizons. Being apart of an organization like this is great too because it allows for a great support system to reach out to. Thank you for letting me be apart of it! If anybody wants to reach me for any other questions or comments, you can find me at megan.benavente@gmail.com. 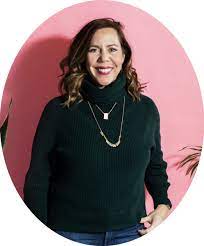 I share your anxiety about hotel rooms not being ready when the buses arrive, or your pickiest crew guy getting stuck in a middle seat. I know the weight your job carries, so I do everything in my power to make it all go smoothly for you
Read the Full Profile 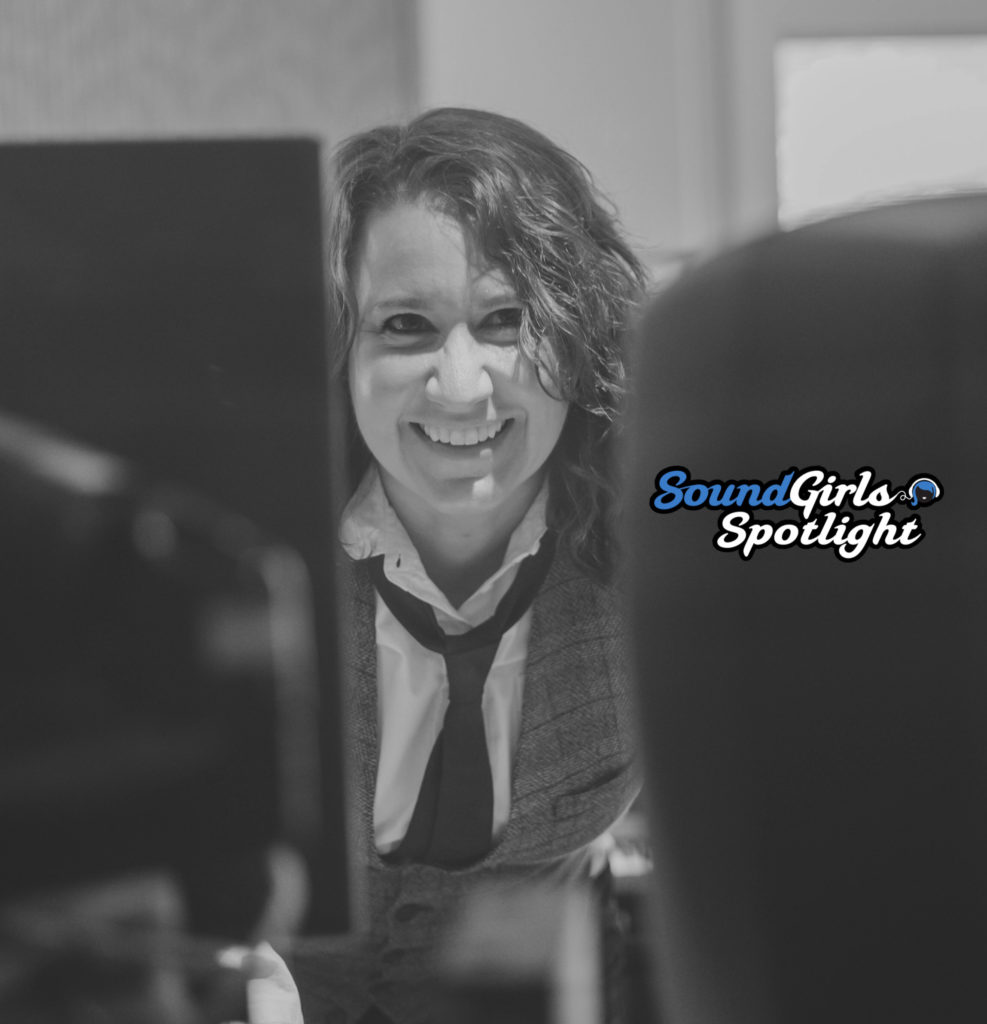 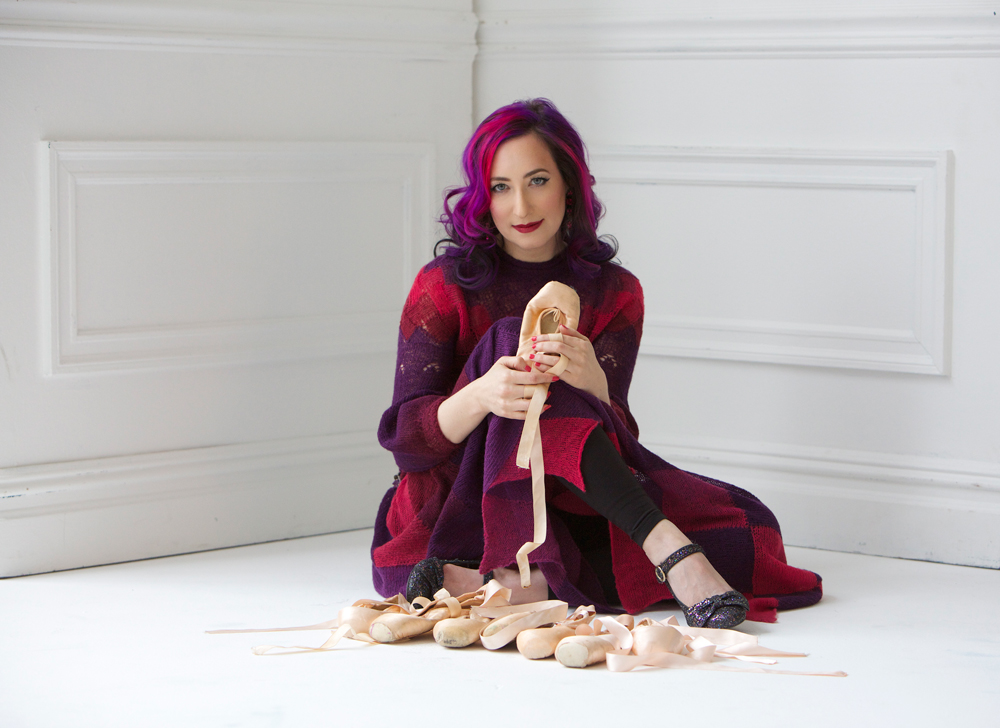 I learned the ropes of every facet of running a label by being very hands-on in those early years, from overseeing an intern, to applying to festivals, to sending promos to indie record stores, to working with a publicist. I did all my own album art and somehow had the energy to do all of...
Read the Full Profile
X
We use cookies on our website to give you the most relevant experience by remembering your preferences and repeat visits. By clicking “Accept All”, you consent to the use of ALL the cookies. However, you may visit "Cookie Settings" to provide a controlled consent.
Cookie SettingsAccept All
Manage consent