With the recent protests over the killing of George Floyd, the Long-Range Acoustic Device (LRAD) and other acoustic weapons used by police have been making headlines once again. Since these devices are most commonly deployed against nonviolent protestors for crowd control, I thought it would be useful to give a brief overview of their development, use, and most importantly, how to protect yourself.

A Brief History of the LRAD 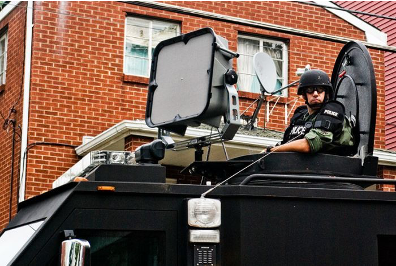 The LRAD, like many other police devices, was originally a military weapon. Work on “sound cannons” began in 2000, after an al-Qaeda attack on the USS Cole [7]. The goal was to create a device that could be used to communicate with possible threats from a distance and disperse them with a high-pitched alarm sound if needed.

Developed by what is now Genasys Inc. (formerly the LRAD Corporation), the LRAD quickly spread from the Navy to the Army, before crossing over into law enforcement [6]. Since its adoption, the LRAD has been deployed domestically against protesters at protests such as Standing Rock, the Women’s March on DC, Occupy Wall St, and the Eric Garner protests. It has also been widely adopted by law enforcement worldwide [7]. Domestically, a Genasys Inc. press release from June proudly lists police departments in Portland Ore., San Jose, Colorado Springs, Phoenix, Columbus, Charleston, and Ft. Lauderdale as just some of the 250+ cities in which police have deployed LRADs recently [3], [6]. 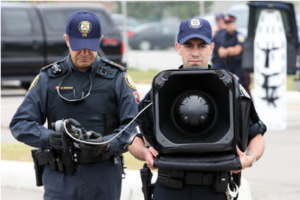 The version of the LRAD that protestors are most likely to encounter is the LRAD 100x, although they may encounter other models affixed to vehicles or helicopters. A lightweight model marketed to police departments, the LRAD 100x may be standalone or worn by officers. The 100x peaks at roughly 137 dB, emits a 30˚ beam of sound with up to 5500 meters and is loud enough to cause pain within 20 meters [5]. Like all LRAD devices, it operates within a limited frequency range of 200 Hz – 10,000 Hz, which means that the tones produced overlap with the most sensitive part of our hearing: the range of human speech [4]. This model may be used to communicate with targets directly, play pre-recorded messages, or emit painful tones intended to disperse people.

The peak volume of an LRAD can range from 140 dB to 160 dB, depending on the model. For context, according to the CDC, noise above 70 dB for a prolonged period of time is where your hearing begins to damage. Noise above 120 dB can cause immediate harm to your ears. 140 dB is where you may feel physical side effects along with hearing loss. 160 dB is where eardrums can burst [8]. 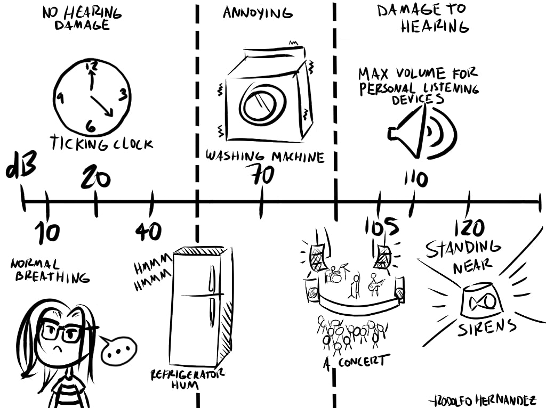 Despite their widespread use against civilians, very little research has been done into the long-term effects of acoustic weapons. Temporary and permanent hearing loss, tinnitus, nausea, migraines, disorientation, ear damage, and lasting sensitivity to loud noises are just some of the reported symptoms [2]. The damage caused by LRADs can also be exacerbated by police who are not properly trained on how to manipulate dispersal tone characteristics, do not use them at the recommended distance, or simply do not care about their targets. The ACLU and Physicians for Human Rights are two of many groups that are calling for the suspension of LRAD use by police [1]. Several excessive force suits have been filed against various police departments regarding their use of LRADs and other sound cannons on protestors, including a successful one in Pittsburgh and an ongoing one against the New York Police Department [2].

Protecting Yourself and Your Hearing

Since LRADs have a peak volume ranging from 140 dB – 160 dB, it is extremely important to be informed. A small amount of exposure to such high-volume sounds can have lasting effects.

Know what to look for. Make sure you can recognize the different versions of LRADs and stay aware. If you see one being set up, alert those around you.

Do not stand directly in front of an LRAD. The volume of an LRAD at the source can be as loud as 160 dB, enough to cause hearing loss or burst eardrums with very little exposure.

Run perpendicular. If you are within the target area, moving forwards or backward will not protect you. Move hard to the left or right to get out of the targeted sound beam.

Wear earplugs. Regular foam earplugs only attenuate around 20 – 30 dB, and will not be enough to protect your hearing from the high volume of an LRAD. However, they will still provide some protection.

Advocate and educate. These devices are being bought in part with your tax dollars and marketed as “safe”. Call or write to your city council, mayor, police chief, and let them know that the use of sonic weapons on civilians is unacceptable. 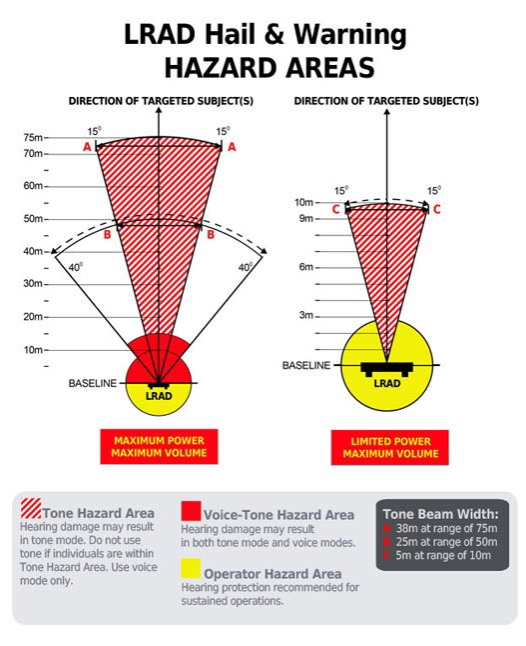