“I wasn’t a trained musician. But I did have ears and that’s what’s important.” 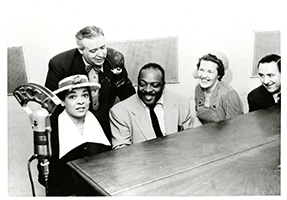 Helen was born in Toronto in 1913 to a wealthy Canadian family. Her great-grandfather started Joseph Simpson Knitting and Yarn Mills in 1865 and her father, John Oakley, was managing director of the company. Growing up, she wasn’t a musician (her parents weren’t musical) but her family would receive a batch of twelve records every month from the big record stores and they could decide which to keep. Helen was drawn to records the rest of her family wasn’t – the jazz ones (artists like Louis Armstrong and his Hot Five). In an interview with Monk Rowe, Helen said, “That’s all I wanted to know about and hear. I didn’t know what the instruments were or what I was listening to but I always knew what I was listening to.” She attended the University of Toronto and completed her schooling at Les Fougeres in Lausanne, Switzerland.

Helen realized living in Canada that jazz music wasn’t coming there. She was going to have to go to the music was and the closest place was Detroit. She moved in 1933 (with her family’s blessing) with the goal to be a jazz singer. While in Detroit, Helen saw Duke Ellington play a show at the Fox Theater (Helen had all his records). Helen forged a note from a music critic to Duke that said Duke would like Helen and he should invite her for afternoon tea. He invited her to tea the next day. When Helen saw Duke had the letter on his mirror, she fessed up to forging it. Duke suspected it but was still amused and the two became fast friends. In an interview with Mark Tucker Helen said of Duke, “I was family and for the rest of my life and as long as he lived I was family and that was the greatest thing to ever happen to me.”

Helen moved to Chicago in 1934 where she was a freelance music journalist. She wrote a regular column for Downbeat (a small publication at the time) where she could write about whatever she wanted or what she was listening to. At the time, there were jazz critics writing abroad but none in the US. She (with Squirrel Ashcroft) helped organize performances of jazz performers like Billie Holiday. She helped put on the first jazz concert in Chicago (where the audience was sitting and listening and not with a dance floor): Benny Goodman, Gene Krupa, and Teddy Wilson. It was also significant because it was an interracial trio playing publicly which was unheard of at the time. Helen helped persuade Benny to hire Teddy Wilson, who was a black pianist. 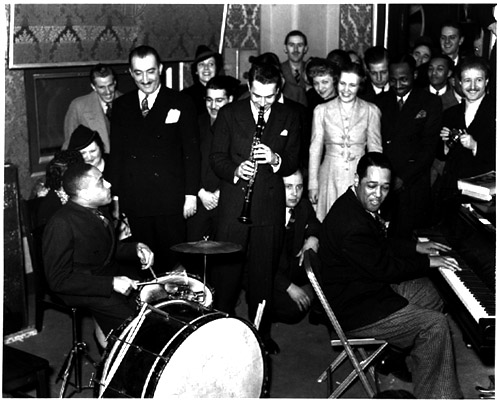 Duke Ellington, Chick Webb & Artie Shaw at a jam session (Brunswick Recording Studio, March 14, 1937). Helen is in the white dress and she arranged this jam session. From Jazzhouse.org

Helen stayed in touch with Duke and went with the band to Duke’s shows when he was in the region. Helen said she was Duke’s “protege” and the band manager “always had me under his wing,” (M. Tucker interview). In those days, as she described it, the band liked having someone in the front who was into what they were doing. She attended all their rehearsals, recording dates and also produced some recordings with Duke. Helen produced recording sessions with other artists such as Paul Mares and Charles Lavere. They were recording to vinyl so the recordings were three minutes max. The tempo of the song would determine some of the structure of the song (if there was time for two choruses, for example). The studio shook when the “L” train would come by so they would lose takes over it.

When asked how she went from wanting to record to actually doing it, Helen said, “I don’t really know. I just did. I went up in the studios and set up a time.” (Rowe interview) “You had to promote yourself. You just talked yourself into jobs,” Helen said to Mark Tucker.

She moved to New York after Duke recommended her to Irving Mills (Duke’s manager at the time). According to Jim Prohaska,

After discussing his plans for a recording company, he insisted that Helen come back to New York with him. She agreed, as Irving had suggested that she should help arrange talent and organize recording sessions for him once the venture was finalized. He wanted her to visit his offices plus check out the music scene in New York first hand. Her short visit extended ultimately into a permanent stay. She initially assisted Mills in pleading his case during meetings with lawyers and investors. Once the legal issues were completed, and Master Records became a reality, Helen became a formal part of the company by the end of 1936. (Prohaska)

Irving had two record labels, Master and Variety. Master was more commercial recordings (which Helen wasn’t as interested in) so Mills had her produce the small group records for Variety. Helen decided who to hire and who to put together for recordings. “I very often was in the control room but most of the time would be in there with the band. They would say, ‘if she’s smiling that’s it – she’s ok.’” (Rowe interview).

Helen produced Duke Ellington’s small band recordings (with Johnny Hodges, Barney Bigard, Rex Stewart and Cootie Williams). She said Duke would go into sessions with nothing prepared. She watched him compose Solitude in twelve minutes while the studio was busy with another session.

“Later on I produced them, you know. I produced his whole band once. But on my own things, I hired the guys and told them what I wanted them to play, and stood in the control room, and decided whether it was happening or not. And if it wasn’t happening, I’d have a good idea why it wasn’t, and what we should do.” (M. Tucker interview)

Variety issued 170 recordings from December 1936 til September 1937. The label collapsed shortly after (due to competition and inability to get distribution in Europe). Some of the Variety recordings were reissued on the label Vocalion (later revived as Okeh, a subsidiary of Columbia Records). Helen continued producing sessions for Mills (for release on the ARC label). Jazz collection Jim Prohaska writes:

“As for the material released during the short nine month existence for both labels, the recordings selected by Irving Mills and Helen Oakley allow us a wonderful glance at some of the finest jazz musicians of the period. I daresay that without Mills foresight and Oakley’s sense for quality talent, some great music would have been lost.”

In addition to doing A&R and operations for Mills, Helen was involved in the local jazz scene connecting people and helping planning events. When Benny Goodman played Carnegie Hall in 1938, she was one of the main organizers of the event. It was the first jazz concert at the event and still considered one of the most significant concerts in jazz or popular music history.

In 1942, Helen’s brother Rupert was killed in duty (during World War II) and as she put it, “my career in jazz ended.” Helen volunteered for the Women’s Army Corps and her sister, Cynthia, joined the Canadian Army. Helen was assigned to the Office of Strategic Services, or OSS, which later became the CIA. In Helen’s obituary (written by her son, Francis):

“She assisted in the disposition of US undercover operatives and radio technicians being sent to occupied countries. In December 1943, she rendezvoused in the recently declared open city of Rome with her sister, now Captain Cynthia Oakley, who headed the debarkation in Italy of the first female contingent. This event was featured worldwide on Pathe news. Helen was relocated to US headquarters in Leghorn, where renegade German soldiers were trained as spies. In March 1945 she was reassigned to act as an undercover courier between Paris and Berne after Germany’s surrender. These orders were quickly cancelled after President Truman’s edict disbanding the OSS.”

Helen returned to New York in 1946 to a very different jazz scene (big band swing had gone out of favor to bebop). She married Stanley Dance, a jazz music writer and music producer who she had met in 1937 at a recording session. They had four children and the two were married over 50 years. They worked together on writing assignments and stayed current in the jazz scene but their income came from other family businesses. They lived in England for some years but sold the businesses in 1959 so they could relocate to Connecticut and pursue their jazz interests in the US (and nearby New York). Helen was active in the civil rights movement of the 1960s (locally and nationally).

Stanley and Helen’s contributions to jazz were recognized at the highest level. They were invited to state dinners at the White House with Presidents Nixon, Ford, Carter and Clinton. Stanley won a Grammy for best liner notes and had five additional nominations. Helen published a book in 1987, “”Stormy Monday: the T-Bone Walker Story,” which was inducted to the Blues Hall of Fame in 2001.

A collection with eight decades of Helen and Stanley’s writing, interviews and photos and sound recordings was donated to The Yale Music Library (The Helen Oakley Dance and Stanley Dance Papers). Stanley passed away in 1999 and Helen in 2001.