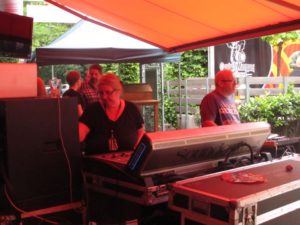 Berenice Hardiman is a veteran of the industry having first been inspired after seeing Pink Floyd at the Liverpool Empire, which was her very first concert.  “I immediately knew that I wanted to be part of whatever that “thing” was that I had just witnessed, but of course I had no idea how to even start. I ended up doing computing at University in the late 70s, which of course, ironically, has actually ended up being very useful. I’d always gone to loads of gigs all over the world, and as I reached my late 20’s, I decided that if I was ever going to make the leap into the music industry, time was ticking away.”  So taking a huge risk, Berenice decided to sell her house and buy a PA system with her partner Dave Claxton. From there they proceeded to mostly teach themselves. “We got books from the library and talked to anyone who would spare us 10 minutes. I’d been hanging around the periphery of the music industry for years so I had some useful contacts to press into service. Luckily, it transpired that I was able to achieve a good FOH sound and Dave took to doing monitors. We worked out very quickly that buying a monitor desk would give us the edge over other local PA companies.”

“We built up the company over the next ten years or so covering tens of thousands of miles, first in a Ford Transit and then building up to a 7.5 tonner (truck), doing the sort of gigs where you learn your trade and people generally seemed to like what we did. By the early 2000’s it had become obvious that in order to continue expanding would involve massive capital commitment, and by that point work with our main client, Midge Ure, had reached the point where really we didn’t have time for any other shows, so we took the decision to sell off most of the gear while it was still worth something, and put on our white gloves.” 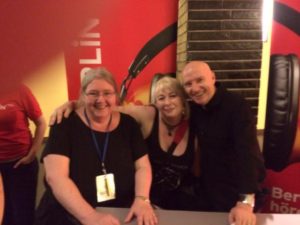 Currently, along with being FOH Engineer and Tour Manager for Midge Ure, Berenice also handles most of Midge’s bookings, does contracts, invoices, designs his merchandise, runs Midge Ure’s webshop and website and whatever else needs to be done.  “We started off providing the system; then he asked me to do FOH and TM as he liked what he’d heard me do for the support act on the previous tour. We carried on like that for a while until 1998 when I told him that he really should have his own website and online store as I felt that was the way to go. Somehow it ended up falling on my desk! Merch design followed on from that in an obvious sort of way. Then he left his manager of 25 years, and I decided it was time to stop being a hire company as it would have needed massive financial investment to continue, so it made sense for me to take over booking the shows. After all, we had been doing his shows for over ten years by that point so knew all the venues

The Show Must Go On!

As anyone who has been on tour knows, things are not always what they should be, and some gigs and productions leave a lot to be desired.  The lack of attention to detail by some service providers/promoters is one of the things Berenice hates about touring. “We had a fairly prestigious festival show recently that descended into a total nightmare for me. The in-ears hadn’t been set up prior to our arrival, one of the keyboards didn’t have a power supply, the drum riser was the wrong size, half the rider was missing, and if that wasn’t enough I discovered the mix position was on a gantry in the roof of a round metal building. I literally couldn’t hear a THING I was doing. I also couldn’t get down to hear what it sounded like where the audience was.” 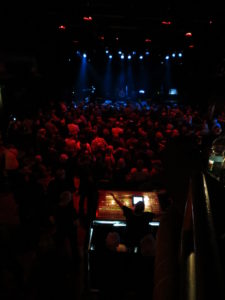 Clearly, Berenice has a history of doing whatever it takes and keeping a positive attitude, which are key to being successful. “Obviously we have done loads of gigs where it’s gone horribly wrong for whatever reason, but we’ve always managed to scrape by somehow! That’s what it’s all about though, making the best of things and getting the show done. Once, there was the time when the truck windshield wiper motor went on our way to a show in mid-Wales, some 4-hour drive away, and the only solution was to rig up some bits of wire and pliers so we could move them manually every now and again… we made the gig though!”

“Once, I nearly got stabbed when somebody pulled a knife on me at a show a long time ago when the only way to avoid our desk being stolen by a rioting crowd was to lie across it! We were doing a Soca band in a drinking club in Southall called the Tudor Rose. What we didn’t know was that there was a big boxing match being shown in the venue after the band and I suddenly became aware we were somewhat outnumbered! Not only outnumbered, but by people who REALLY wanted a load of audio gear!! They didn’t get it though.”

When asked what Berenice likes most about her job,  “Nothing beats standing behind the desk with a great PA and making it sound fantastic!” 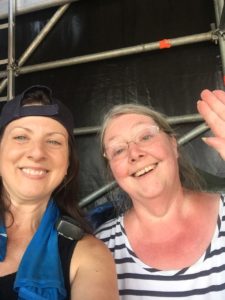 What advice would you give young women wanting to enter the field of live sound or professional audio?

“Be very sure it’s what you want! Home life is bound to suffer. I’m lucky that I work with my other half because otherwise, we would never see each other. We worked every New Year’s Eve for about 15 years! The downside is that we never really switch off from “work” which is ok for us because we love what we do.”

As it is with most veteran live sound engineers, when Berenice started her mixing career, consoles were of the analogue format.   If you understood signal flow, you could walk up to any analog desk and familiarize yourself with it rather quickly- a luxury that no longer exists in the current digital age. Coming from a computer background, Berenice made the transition from analogue to digital consoles fairly easily.  “ My only issue still is that at the back of my mind I know that if an analogue board goes down, you can generally row to shore somehow, but the same is simply just not the case when you go digital. Having said that, there are so few old boards out there that work flawlessly now that it’s a small price to pay for being able to just simply load your show, and off you go with a few tweaks!”

The vast array of digital platforms and the complete lack of uniformity among them can be intimidating if not overwhelming to a less experienced engineer.  Berenice’s suggestion for learning different consoles- “RTFM!!! and then install the offline editor and play with it… YouTube is a very useful resource.”

What is your favorite gear?

“I’m a big L’Acoustics fan! And I don’t like to go anywhere without a trusty TC Electronics D2 with a footswitch. I’m not really into carrying racks of valve compressors etc.”

What’s in your tool bag?

“Now? A bag full of XLR/jack converters, my headphones, a footswitch and some lucky Chinese money a fan gave me in 2009!”

What do you feel is your biggest mistake you made throughout your career? What did it teach you?

“I once tried to fix a power amp during sound check and forgot to unplug it first! It taught me not to panic because things get forgotten!”

What would you say are some ‘must have’ skills?

“Calm, methodical thinking in a crisis and keeping your eyes and ears open all the time. “

“Being able to cope with very little sleep and crap food also helps!”

“As far as audio engineering goes, a very wise man once described a very well respected engineer to me… he’s a really great engineer, there’s nothing between his ears and his fingertips, and I think that’s still a very sage opinion. In my opinion, there are far too many engineers out there who over analyze stuff rather than just feeling the sound.”

Michelle Sabolchick Pettinato: A love for music, adventure, and traveling led Michelle to a career in live sound. She is a founder of SoundGirls and blogs about life on the road, and what it takes to succeed in live sound.

Missed this Week’s Top Stories? Read our Quick Round-up!
Should I Stay or Should I Go?