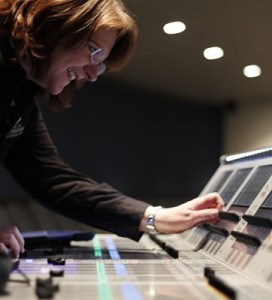 Norah Seed is an audio engineer who has worked in Live Sound for over 25 years. She has worked in theatre, television, and AV. She currently heads the audio department for the Shell Theatre in Alberta, Canada.

As a child Norah became an accomplished musician, earning a grade 5 in piano at the Royal Conservatory of Music in Canada. She went on to learn the flute in the high school band and switched to drums in her senior year.  She loved music but had no interest in performing, but it led to an interest in audio engineering, as she found this was a way she could stay involved with music without being a performer.

Her introduction to the behind the scenes positions began when her older brother started volunteering at a local community television station. Before long she also became a volunteer beginning with the operation of studio cameras, then moving into sound recording for ENG shoots.

The Seed was Planted

Norah first discovered a soundboard, and her journey began. Norah ended up following her brother when he started volunteering as backstage crew at a new theatre.  It was there that she seemed to latch on to the whole theatre vibe. They had workshops on everything from sound and lighting to stage management.  Her favorite event she enjoyed working on was the large musical productions – from working with the wireless mics backstage to eventually operating the large analogue audio console they had. 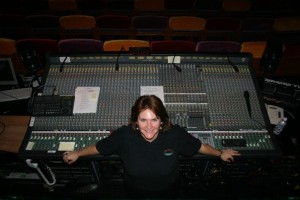 As her experience grew, Norah started to volunteer at any outdoor festival that came to town during the summer who would take stage crew. She worked with jazz, folk and blues festivals and gained valuable knowledge about mics and placement for these different genres. Norah always hung out with the FOH engineers and asked a million questions about how stuff worked and why they did what they were doing. Norah loved the technical aspect of how things worked and believed this was in her genes as her dad was an electrician when he was younger before joining the RAF to become a pilot.

This interest in sound was very different to how she thought her life was going to turn out. During high school and university, she studied math, accounting & economics. It wasn’t until she failed an economics mid-term in University, that she doubted her chosen path in the financial field. She went to see an academic counselor who told her that the undergraduate degree wasn’t all that critical and she should choose a subject that was of interest to her. She discovered that the university had a music program she could study. Although she played a few instruments, she felt she wasn’t a very good musician. She focused on music history and studied composers and music genres to get an undergraduate Bachelor of Arts degree.

After she had graduated she didn’t have a clear career direction so went to work in an office, answering phones and working on a computer. Norah hated it but continued to volunteer a lot of time after work at the theatre. During one of the theatre’s workshops, Norah mixed a band and recorded the session to tape.  This tape became her demo tape application to get into a recording engineering program at Fanshawe College in London, Ontario.  Norah was accepted and ended up studying Recording Engineering. After she had graduated from their two-year program she followed it up with another year of study, completing the post-diploma “Digital Applications” program focusing on digital audio editing. Norah says this is an excellent school with up-to-date gear with teachers who are well respected in their fields.

Her first job in audio after college was in Toronto working in digital editing where she did sound effects and dialogue editing for a short while. She thought she wanted to pursue this field, but it quickly became pretty evident that the editing world was very ‘unmusical’, boring, to sterile.  It was just her, in a small room, staring at squiggly lines on a computer screen listening to baby cries. While working on a digital audio editing contract, a contact she had in the audio industry connected her to a cruise line job.  She had a phone interview with a Miami staffing specialist and was offered a job and given 24 hrs to make a decision. It was an easy decision for Norah, she packed her bags and left for Miami to start her new career as an audio operator with Royal Caribbean Cruise lines.

Norah did this for eight years and loved it. She learned a lot during her time at sea and worked with many different types of international acts and instruments.  This is also where she made the move from analogue to digital consoles as she had to learn whatever console was on the ship she was assigned to. When she finished with the ships, she became a freelance audio professional and on call with her local IATSE. Being so versatile, Norah was able to pick up a gig doing almost anything, from AV gigs to running monitors and FOH for bands. She did set-ups for large arena size concerts & events and set up and operated small PA systems around Ottawa, Ontario. Norah even picked up work at the same theatre where she once volunteered, only, this time, they were paid gigs. 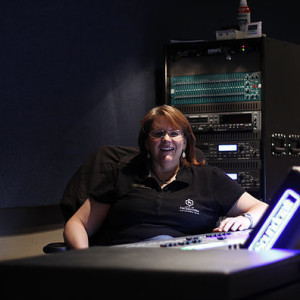 She is a firm believer in networking, and her career to date is proof that it does pay off. She kept in touch with her shipboard colleagues via Facebook and noticed when one of them posted that he had just received a promotion, so she asked him about it. He told her he had been promoted to the position of Supervisor in a theatre in Alberta and that the audio position in that theatre had recently become vacant. Norah was very interested, so he sent her the link to the job.  After she had read the job description, she got excited as it was exactly the kind of job she was trying to get in Ottawa. She sent him a resume and was eventually hired.

Norah once again packed up her life in Ottawa and drove 4000 km across the country to start a new life as a full-time permanent audio engineer with the City of Fort Saskatchewan in Alberta, Canada at the Shell Theatre. The theatre is a 538 seat performing arts space that has a self-produced Professional Season Series, consisting of professional acts focusing on Canadian talent.

Norah started at the theatre in May of 2014 and loves it. She feels it is her dream job as she gets to work with all sorts of clients from professional to amateur, from musical theatre to bands. As the head of audio, her job is to advance clients technical needs, design new audio systems to make the space and job more efficient and keep up maintenance of all gear.  Norah and her colleague, the head of lighting, decide how to spend the budget which is a pretty responsible position and provides a never-ending learning curve which she finds very rewarding.

When we talk about obstacles or barriers that she has faced, Norah says that she is her own worst enemy. Confidence has always been an issue for her; she has always second-guessed herself and her abilities. She always felt there was someone better for the job and that she still had more stuff to learn. But she liked being around theatre and music and always gravitated toward sound. The important message here is that she didn’t just give up or go away – she kept watching, asking and learning.

She feels lucky that the people she has worked with were always supportive and helpful. Being a go-getter and very inquisitive, Norah would ask questions about how others did things and why they chose particular gear or techniques. She would put herself into situations where she could put these skills to use herself and gain practical experience.  This is how she developed her preferences and techniques. Eventually, after doing it for long enough and getting positive feedback about her work, she started to believe that she did know a thing a two.

Early on in her career, while volunteering at the community television station and the City run Community theatre back in Ottawa, Norah had a few good mentors, Andy Sloan & Richard Hache, and the other was a fellow volunteer Wayne Chomik, who now works for Harrison consoles in Nashville. She had many opportunities to run a sound board and learn about signal flow, gain structure, different mics and their applications while surrounded by experienced operators.

Norah continues to learn by becoming a better system designer. She does this by keeping current with the ever-changing technology. She is continually improving her electronic knowledge and says the three most important things she has learned since her sound career began are:
Trust your ears
There is more than one way to do things
A patient & pleasant personality goes a long way working with artists and colleagues.

Outside of work, Norah is an avid road cyclist.  As soon as she got settled in her new city, she joined a non-competitive cycling club.  She enjoys long distance rides upwards of 100 km in a day for fun, social interaction, and exercise. (WOW!)  Norah is also happy her new city is so close to the Rocky Mountains where she enjoys getaways there to explore the mountain landscape when she can.

Norah’s advice for anyone starting out is valuable:
Watch and learn from others more experienced than you.
Watch YouTube videos.
Read about sound, acoustics, and electronics.
Be pleasant and flexible to work with.
And above all, if you are passionate about what you do, it will show, and you will be in demand.

You can learn more about Norah Seed at her website SeedSound