On the Road with Jenny Douglas 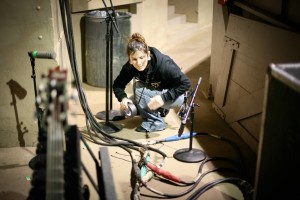 Jenny Douglas grew up in the small town of Ozark, Missouri. She developed a passion for music by going to local shows with her older sister, who sold merch for bands. When it came time to attend college, she chose to study studio sound at the University of Missouri. Jenny quickly realized that she was more passionate about live sound, and transferred to Full Sail University’s Production and Touring program. She graduated class valedictorian and has been working in live sound since 2002. Jenny’s specialty is Front of House/Tour Manager: she has worked with numerous artists including In This Moment, Walls of Jericho, Napalm Death, Stick To Your Guns, Amity Affliction, Relient K, New Found Glory, Russian Circles, Senses Fail and The Get Up Kids.

She landed her first touring gig in 2006 when In The Moment took her out as a merch person. After a disastrous soundcheck in Oklahoma City, they asked if she’d also like to be their FOH. Eventually, she also found herself tour managing. Working for ITM taught her a lot, Jenny recounts:

“We were on tour with Five Finger Death Punch. The TM for FFDP was also working for Skillet and was on retainer: when Skillet called him, and he had to do a weekend show with them, he asked if I could handle TM duties for FFDP while he was away. I said sure, how hard can TM-ing a bigger band be? The FFDP band guys left to play paintball: I had to put their catering on the bus and their new sound guy showed up. I was also trying to take care of the ITM band guys and mix them, while also getting both bands paid. I had no fucking idea – press and scheduling and day sheets – I was suddenly in charge of 24 people. So that was a hectic three days, but I learned so much. I ended up being in a Pollstar magazine with FFDP, and it still makes me laugh.” 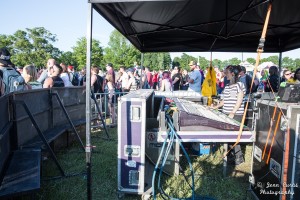 Jenny mentions that she prefers touring with hardcore and metal bands: although the money isn’t always great, she values her friendship with the members and loves that the further away the country, the sooner these bands go.  Walls of Jericho took her all over South America, Asia, and Russia, in a time where it wasn’t common for smaller American acts to travel abroad.

“In Santiago (Chile), I was at FOH mixing. I watched the show end, and Walls of Jericho got escorted out the escape tunnel under the venue into a van, and I was stuck at the show at FOH until every person left because it wasn’t safe for me to leave. I met up with the band hours later because I had to pack up their gear and make sure nothing was stolen. Meanwhile, I am just sitting behind this huge metal grate, as people were taking my picture as they exited. It felt like I was in a human zoo!”

“While Walls of Jericho were in Jakarta, Indonesia, the promoter tried to do a meet and greet, and people were trying to tear the tent down with the band in it, so he shoved them in a van, and I stayed behind to pack up the gear. I watched them drive away while people were shaking and chasing the van.”

“Then we played Malang, Indonesia, at the UMM Dome, and it still might be one of the biggest venues I have ever mixed in. I remember hearing the call to prayer for the first time in my life, and I had no idea what a mosque even looked like. I was a Caucasian kid from the Midwest, and my mind was fucking blown. This was also the first time I had seen tanks, a riot squad, and a massive police force ready to control the crowd at a concert.”

“In Singapore, a promoter decided not to pay us after the show and left us at our hotel. After trying to call him multiple times, we were ready just to call taxis for our flight in the morning. Some random fans ended up coming to the hotel, showed us around the city, and after we explained what had happened with the promoter, said they would help. Six different people came in cars with their moms driving, and took us to the airport at 3 am! It was incredible. Singapore hardcore forever!”

“In Venezuela, we saw anti-American propaganda everywhere. I took a picture of the whole side of a building saying George Bush was scum. I mean a 35-story building! Caracas was also my first time seeing people casually walking down the streets with AK-47s.  And these are just a few of the stories. It has all been very surreal.”

While she loves touring, she mentions that artist egos can sometimes be hard to manage. While tour managing, Jenny has found herself becoming the scapegoat for things she cannot control, such as lost luggage or passports, airline mechanical delays and weather problems.  As such, she believes patience and troubleshooting under pressure are the two most essential skills required by touring professionals: “If you freak out, then the artist freaks out. Is it on fire? No? Is someone hurt? No?  Then it is solvable.” 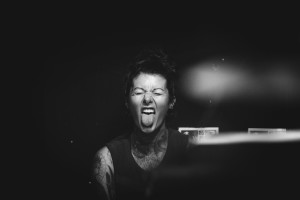 Jenny’s gear must haves include the Sennheiser e901 mic due to it’s ability to showcase both the high and low end sounds of a kick drum as well as the Sennheiser guitar and in-ear monitors wireless systems because they are reliable and easy to use. She swears by Shure SM57’s as snare mics, and mentions that she always adds a bit of gaff on them to prevent the capsule from flying off if they are hit. When working with hardcore bands, she also always keeps a steady supply of SM58’s in her microphone box, as they survive the constant abuse the singers inflict on them.

To those looking to get into the music industry Jenny offers these words of advice:

“Stay in school. Finish a degree in anything. You won’t regret getting that degree, and you always have something to fall back on. Employers out there in the ‘normal world’ want you to have one, and I have experienced many lulls in the music industry, where I was left asking myself what else could I possibly do.

Also, don’t take anyone’s shit. People are always going to be jealous, or snooty, and try and put you down, saying you can’t do this, or you can’t do that. Well, you can. Don’t give up. Never be done learning and don’t be a jerk. Technology always changes and you have to be willing to change too, or you are going to be left behind. Don’t be saying I only work on Midas Heritage’s or Soundcraft K2’s; everyone has a preference, but you can’t be stubborn about some of the stuff that gets thrown at you. Our lives are moving to digital, and while they may not sound as good, it is improving every day.

You have to be ready for anything and everything: there are some weird pieced together rigs out there that make no sense, but acoustically they work! Also, as a general rule, if you need something on tour, always bring it with you, and always have a backup.” 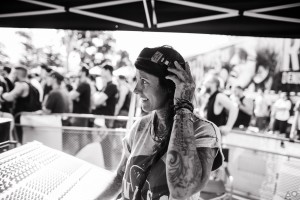 So. When Can I Expropriate the Sound Guy?
Investing In Your Education