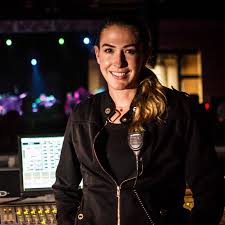 Rock and Roll was no ‘pipe dream’ for Grace Royse. Despite all of the discouragement from those around her and closest to her, Grace fought her way through to a touring career as a live mixer, never giving the negativity an ounce of energy.

“I was always obsessed with music for as long as I can recall. I still own the mix tapes I dubbed in my garage as a kid. In high school I discovered Punk Rock and made some brilliantly terrible recordings.”  Once she was old enough to drive, Grace started following bands around and working her way into recording sessions where she met a few engineers and learned whatever she could.  “I ended up in the beginning stages of CRAS (Conservatory of Recording Arts and Sciences) in Phoenix. Back then the school was taught mostly by working engineers and the classes rotated through local studios, some of us even landed internships while in class.”

While attending CRAS, Grace met David Nichols, who was the owner of Livinghead Audio Recording and a talented engineer himself.  “Livinghead had amazing vintage gear and the best of the new digital platforms. I worked with Jazz, Classical, Rock, Rap, Country and Indie. We attended several AES’s as a studio, and after graduation I worked with David for three years before opening my own studio in Tempe.” 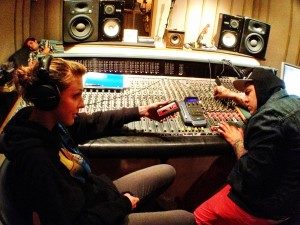 Grace and her business partner built their studio by at first, providing PA and live multi-track recordings. Maintaining her own clients and running shows, even on a small-scale, is where she really learned the most.   “A few years after the studio opened, a Production Manager friend called and said his engineer had quit and he needed help. That very day I ran my first real touring show as a favor to my friend. I worked at that venue for the next 6 years, meeting hundreds of Engineers and Tour Managers, was eventually scooped up by a Fat Wreck Chords tour, and have been touring ever since.”

When she was first getting started in the business, Grace faced a lot of opposition from family and friends who believed touring to be an unsafe environment and bought into false rumors that she had fallen prey to drug use and promiscuous sex.  Learning to stand up for what she wanted was her biggest obstacle, but one she has overcome.  “I never gave in to what others thought was best for me, pushing forward with my own voice in my heart.  It’s a technical job.  It’s no different from any other career with a long learning curve and long hours. You must prove yourself, starve for a while, stick to your guns, and love what you are doing, even when it gets really, really hard, even if you stand alone in your vision. ”  “As a doctor, it takes 12-14 years to actually get anyone to call you “Doctor” with an ounce of respect, and though being a Doctor is looked on with reverence in our culture, with the long hours, and travel schedules, not many people can maintain relationships with them. The struggle feels similar to me, though we aren’t curing cancer out here, some days it feels just as hard.”

Touring life can be brutal on relationships, which Grace experienced recently with both an supportive significant other, who was unhappy and wanted her home all the time, and a very old and close friend who, overcome with jealousy, told her touring would make her ugly.  To make things easier, Grace started actively seeking out like-minded people.  “I continue to build an expansive network of colleagues who support me and have big goals of their own. It’s kind of like growing up in a small town where everyone becomes a farmer, and you are the outcast who wants to be an artist, then one day you move to San Francisco and find amazing, happy people to create with. Touring was my grand move. Over the last nine years, I have met the most amazing teammates. We push each other to succeed, believe in what we are doing, and offer this rare comfort: You aren’t crazy to have such wild dreams and I believe you can do it! “ 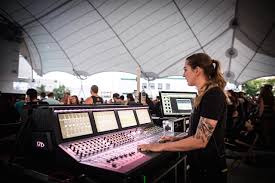 Over the last nine years Grace has had an exciting career in a variety of roles:  FOH engineer, Monitor Engineer, Stage manager, Production Manager, Recording Engineer, Pro Tools Op, and Broadcast mixing, with a variety of bands:  No use for a Name, Useless ID, Pour Habit, Dirty Heads, Cypress Hill, Pennywise and the Descendants.  She is currently the Monitor Engineer and Stage Manager for Sublime with Rome, and FoH/Production Manager for Rome.  That’s a lot of hats to be wearing.   When asked how she handles all of the responsibility Grace replied, “I love working within a company that has me doing lots of different things. There is no chance of getting bored around here, that’s for sure. There’s huge comfort in that. I’m kind of an organizational freak and to be able to steer my own ship is awesome. To be able to work with people who trust me is awesome.  I hope in the future, they continue to give me even more responsibility, because not only do they know I can handle it, it’s a benefit to the whole project and everyone involved to have me at the helm, and that’s one of the biggest compliments in the world. I don’t mind that my hat changes, and I don’t mind that they lean on me for just about anything.”

“I remember the first time one of my Artists introduced me to someone as simply “my Engineer.” I really took that as a huge compliment. I’m going on four years with these guys, and we have done just about  everything you can imagine. Fly dates where I’m mixing them in this little room, with scarcely a PA and I’m the only one there, to these huge arena tours, where I’ve got several semis trucks, tons of local hands, and my own PA to fly.  I think in that time, my whole network has learned that they can come to me with just about anything and I’ll make it happen.” 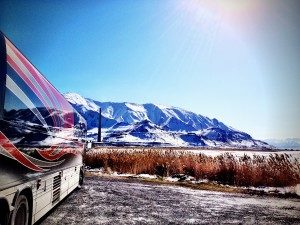 Her favorite day off activity is hiking to a swimming hole, as long as the destination permits, and being a huge foodie, she likes to seek out the best cuisine around.

As for advice to other women who wish to enter the field: “Hold your own. Set boundaries and stick to them. If you are not true to yourself, your goals, and your own professionalism, you won’t make it, not in Rock n Roll, not anywhere.”  “You’re a technician but also an artistic performer. Passion drives art. If the passion is in your heart for that chilling silence right before the first note hits, and the thunderous applause after the last, proceed.”  Grace’s future plans include the goal of FOH/TM.  “As long as I stay with people and projects I care about, I know it’s within reach.”  “All the amazing people I have met and grown with over the years are invaluable to me. I am beyond grateful for their years of guidance and support. Lapping the globe with your best friends is beyond amazing.”

“I am totally a closet gear junkie.” She’s quick to add, “I have worked with the worst gear you can imagine over the years, having to duct tape together a PA for a show, and repair things on the fly has made me a better engineer. I feel really bummed when I think about the privileged kid that gets to buy all the really nice gear right out of school or goes right in to a super clean gig. They are totally getting jipped out of the struggle that will make them amazing. I laugh now, thinking about this disgusting club me and my friends worked in many years ago. I had to repair an NL4 that got stepped on in the middle of the show because we didn’t have spares. There I was on stage, right there under the lead singer, who was spraying fake blood all over the crowd and me. That club taught me repair, maintenance, and really down to the point physics of sound and electrical science of what we do. You will never learn that if you walk in, flip a switch and it always work. Get your hands dirty and make it work when it won’t.”

Grace’s Recommended “Must Have” Skills:

It is unreal, the broad spectrum of people you will work with. Be ready to have thick skin for that loud tough boss. Be open to the quiet, humble tech who doesn’t speak much, he likely knows more than anyone. Get along with everyone. You never know where you will see them again on your journey

You’re a super dork now. Read the books, hit the conferences, get in the blogs, and nerd down with your gear head friends. Stay on the edge of the coolest and greatest. Someday, when you are a really big deal, they’ll give it to you for free! For now do what you can to put your hands on the gear and read anything you can find.

Organize, Prioritize and Be Prepared.

Learn to be the neat freak. The cleaner you are, the smoother the show will go. I make lists. I lay out my gigs in my head on the airplane. And I anticipate a million scenarios.

As the saying goes, “anything that can go wrong will go wrong.” If you live by #3, you are already, ready. I tell my interns, the people I respect most are calm amidst the storm. A pillar, the one you go to when the sh*t really hits the fan, and there they are, calm and with the answer in hand.

Have a good Sense of Humor.

Number five should very likely be number one.  If not for my ability to laugh, I’d never have made it this far. Humor, when you make mistakes. Don’t beat yourself up about it. That’s how anyone gets great at anything, by getting it wrong first. Laughter, when you are too tired and too busy to think. Humor is vital to the ability to brush off stress. Laughing with my friends is the #1, hands down, greatest part about this career.  Laugh lots.  Laugh that you are blessed to wake every day to a career you love, that you followed through with what you started, and now your dreams are chasing you around the world.

Proving Yourself
The Volume Battle