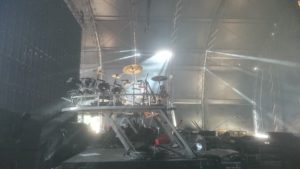 Much like in part one of my festival guide, the key to working in-house at a festival is to be prepared. Pack warm, waterproof clothes, way more socks than you think you’ll need, sanitiser, etc. If you have any special dietary requirements make sure they know as soon as possible, and bring extra non-perishable food in case the message doesn’t get passed on. The days are long and busy; you may not get a chance to sit down to eat your meals, let alone leave the stage to get them. Someone else might pick your food up for you, and they might not understand what Coeliac is, for example, so have a back up ready.

When prepping the gear, read all the specs you’ve been sent carefully (e.g., a Shure Beta 98amp, 98AD/C and 98H/C may all have the same capsule, but they are not interchangeable) and allow for several bands to be mic’ed up at the same time if you have rolling risers. Pack extra mics (I’d recommend mainly Shure SM57s. We joke about it, but they really will work on almost any instrument) and adapters so you’ll be ready when someone inevitably brings more than what was on their spec. In fact, take the specs as a guide rather than gospel and plan to be flexible. If you are operating a desk, try to find out whether the bands have their own engineers, and whether they have a show file. If not, along with your generic starting file you can start building ones for them to save time on the day (but expect there to be changes!).

If you’re in charge of patching, discuss with the rest of your department whether you’ll work “1 to 1” (everyone gets plugged in as per their channel list) or if you’ll have a festival patch (all bands use the same channels, with similar instruments grouped together. e.g., inside kick drum is 1, guitars all go in 13-16, brass in 24-30, etc.). Festival patch can be a lot quicker if you’re using analogue desks, sharing backline and mics throughout the day, or if you’ll be mixing most of the bands yourself. It helps the in-house monitor engineer in particular because they can leave rough mixes up and just tweak them band to band instead of starting fresh every changeover, which can be very time-consuming. 1 to 1 is obviously a lot easier for guests, though, especially if they have programmed a lot of scenes for their set in their file which could take too long to adjust after a soft patch.

Festivals can be intense, with very short changeovers, so staying organised is paramount. Label absolutely everything. Imagine you were to suddenly get ill and have to leave. Would a colleague be able to step in and know where and what everything is? If not, label it up until there’s no way anyone could get confused. If the worst happens and you do have to go, someone will be able to pick up where you left off. More importantly, when you’ve been working flat out for 14 hours and your brain goes blank right at the critical moment when you’re fault finding, you’ll be able to rely on the labels to get you through. If coloured tape everywhere doesn’t suit the look of the show (for example if it’s being broadcast), silver marker pen on black tape is a lot more subtle. Keep your paperwork and a pencil with you, so you can note down any changes as you go along. Don’t forget to update anyone else who needs to know, e.g., other stage crew, engineers or the broadcast truck. Carry a phantom power checker, and a small mic with a patch lead and an XLR to jack for DIs so you can test any lines that go bad straight away (after making sure that channel is muted!).

Don’t wait for bands or engineers to come to you, go and find them as soon as they get to the stage. Check for any changes to their spec, ask them how they like their mixes if you’re doing monitors for them, and so on. Musicians can be very laid back, so you need to be friendly but firm to keep them on schedule. At the changeover, make sure they set up as quickly as possible. Take the lead for line check if you’re mixing. Ask for the instruments you want to hear, and politely tell them to stop playing the ones you don’t. For monitors, the quickest way to get usable mixes is to ask everyone to put their hand up when they want the instrument that is being checked in their mix, and not to put them down until it’s loud enough for them. Don’t get flustered trying to give everyone what they want at the same time, just calmly work from one side of the stage to the other and let impatient people know you’ve seen them and you’ll get to them. If the engineer on the other end of the multicore is moving too fast for you, ask them to slow down. You both need to hear everything, so they should be happy to oblige.

Festivals can be manic, challenging, wet and cold, but it’ll be over before you know it, and that huge sense of achievement you feel at the end might even be enough to persuade you into another field the next week. You’re going to need more socks.

Other articles on Festivals with useful information

Coachella Music and Arts Festival: Two Companies that Did!

Beth O’Leary is a freelance live sound engineer and tech based in Sheffield, England. While studying for her degree in zoology, she got distracted working for her university’s volunteer entertainments society, and ended up in the music industry instead of wildlife conservation. Over the last ten years she has done everything from pushing boxes in tiny clubs to touring arenas, and spends a lot of her life in muddy fields working on most of the major festivals in the UK. She has a particular passion for flying PA, the black magic that is RF, travel, and good coffee.