When I first started playing music in Toronto’s music scene, it was during an era where CDs were still dominating industry sales and the digital scene was not how we see things today. Gatekeepers on all levels from retail to record labels only allowed so many artists through, and it was at a high cost. The idea of having a record deal or even getting your music heard on a mass level was intimidating and for most simply wishful thinking. Sure, part of my success was about the timing but it was really about the hard work, networking and ensuring I would be the best songwriter possible.

As my career in music evolved, I formed my own label, music publisher, and video production company, and am asked almost daily from friends and fans on how to release music and make a splash doing so. Though today it almost seems too easy, I find that many ambitious musicians still don’t understand the critical steps to simply reaching the finish line. Here is an action list I put together to adhere by next time any of you get the spark to write and record an album:

Write and document all your ideas:

One of the best ways to stay on track when bringing your songs to life is to keep a record of them. Whether you’re playing acoustic and recording via a voice memo app or using a free program like Garage Band on the computer, it’s easy to scratch demo all your great ideas. Keeping documentation on your ideas gives you a sense of progress, and allows you to easily share songs with other collaborators within your project.

Give yourself a deadline:

We all have a musician friend who has the story “I’m working on this great album”, yet it’s already been two years and there seems to be no end in sight. It’s very easy to lean on perfectionism and as time goes on you can second guess your work, which leads to potentially endless delays and many albums never being finished. When you give yourself a realistic deadline, you will be surprised on how you figure things out and make incredible progress along the way. Think of how deadlines work in the business world, yes it works for musicians as well!

Deciding on how you will record your album is a monumental moment in your steps to finishing your upcoming music. There are endless producer-engineers out there with years of experience, and at different rates to meet your budgetary needs. For those with the experience or willingness to learn, there are multiple recording suites available for PC/Mac that are relatively easy to master within a reasonable amount of time. Though being a music producer requires lifelong learning, today’s programs do much of the heavy lifting. Regardless of which route you take, making the commitment with how you will record your album shows there is a light at the end of the tunnel.

Ensure your mix and mastering are of quality:

Your music can be the best work of art in 2017, but without a quality mix and professional mastering, you may have more work to prove your worth. A great mix not only helps your music sound it’s best, but it also provides an extra set of ears that has your best interest in mind. The mastering process can be equally as important and helps your music sonically be on par with other music being listened to by fans on Spotify, Apple Music, Amazon and every other platform you can think of.

Register your music with a performing rights organization:

Many musicians don’t fully understand the world of music licensing, copyright and overall accountability for royalties when your music is used in film, television and other public locations. Make sure you register yourself and your music with your choice of a performing rights organization (PRO). In the United States, the three major players are ASCAP, BMI and SESAC. These organizations help ensure music usage is accounted for, and that you are rightly paid for its use.

Putting your music on Soundcloud and Youtube is great, but those are obviously not the only platforms that music fans use for new artist discovery. Using low-cost digital distribution sources like Tunecore or CD Baby will help push your music to top engaged platforms like Apple Music and Spotify.

Let’s not forget the most critical step in all of this. What good is making the music with the goal of being recognized, if you don’t market it properly? So many musicians forget to allocate even a nominal budget towards marketing, and this can lead to major disappointment. Have no fear though, today you can market your music for substantially less money than artists of any other decade have. When planning for a record release, always keep in mind how you will market the efforts and how much money will you need to allocate.

Putting out an album can be a very overwhelming process, but can be easily simplified by creating your own checklist and holding yourself accountable along the way. Believe me, nothing feels more fulfilling than getting those new CDs in the mail or seeing the amazing feedback in the press about your latest music. Once you go through the steps of making an album, I promise it gets easier and your album checklist will be committed to memory. 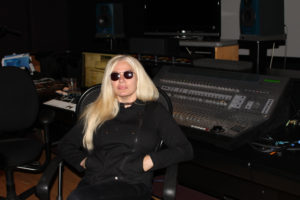 Betty Moon is a Toronto-born singer, songwriter, producer, and filmmaker. She has recorded six albums, including the 2014 release “Amourphous”, which Moon produced and which features the single, “Valentine,” mixed by Grammy Award-winner Chris Lord-Alge. Moon’s music has been featured in a variety of television shows and films including Californication, Dexter, Bounty Hunters, Walking the Dead directed by Melanie Ansley, and Last Gasp starring Robert Patrick.

In 2010, Moon relocated to Los Angeles and released “Rollin’ Revolution,” which garnered airplay on famed L.A. rock radio station KROQ. In 2013, Moon was a featured artist at the Sunset Strip Music Festival, sharing the stage with Marilyn Manson, Quiet Riot, Black Label Society, and The Offspring. She continues to be a regular performer at iconic venues such as The Roxy, Whisky a Go Go, and The Viper Room in Hollywood, California. Her collaboration with top music industry professionals includes Kenny Aronoff, Randy Cooke, Wes Scantlin, John Christ, Jason Sutter, Glenn Milchem, Gavin Brown and Chris Lord-Alge