Teaching the Next Generation: Barbara Adams 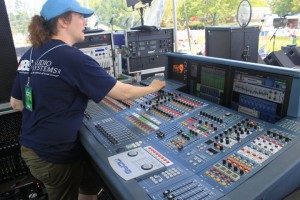 Barbara Adams has a full plate.  Not only is she the Full time House Engineer at Tin Angel- a listening room in Philadelphia, part-time engineer at World Cafe Live, also in Phili, she occasionally works as a freelance Engineer/System Tech for two production companies, and does freelance work mixing FOH for regional bands touring the North East and Mid Atlantic states.  Barbara is also the owner and business manager of Burn Down Studios in Germantown PA, Adjunct Professor of Sound Reinforcement at Drexel University AND as if that’s not enough she is a mother to a five-year-old son.

In the pages of the Rolling Stone

Even though she wasn’t a musician, growing up, Barbara Adams was all about music.  At around 14 years old, while flipping through a copy of Rolling Stone magazine, she came across an ad for Full Sail which sparked her interest in music production. As graduation grew closer, it wasn’t easy convincing her mother that audio engineering was what she wanted to do, but she was hooked on the idea of working in music production, and enrolling in Full Sail seemed to be the best route.  “ Being fairly shy at that time in my life, I wasn’t comfortable going to a studio and trying to learn that way. I was more apt to learn in school.” “When I was 20, I finally had the opportunity to go to Full Sail and let’s just say, I learned not to be so shy anymore. I took every opportunity I could while I was there to get out and learn. When I graduated, I came home and started as an intern at a studio.”

She’s been going ever since 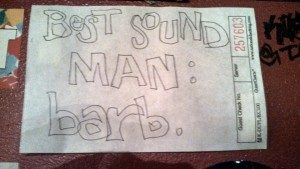 Following her graduation from Full Sail in 1995, Barbara started as an assistant engineer at Sonic Recording Studios in Philadelphia.  Three years later, she found herself feeling stuck and very unhappy. While attending Full Sail, she had found her passion was in Live Sound, and the studio life just wasn’t cutting it.  “ I was thrilled when I started working with local bands at various clubs in the Philadelphia area. Around 1998 I got a job as monitor engineer at the Trocadero and moved to doing live sound full time.”   “I love the challenges I face every show. It is what drives me to be better. This industry is constantly changing, and to move forward, you have to adapt. Although it is not given every time, one of the best things is to hear an audience member tell me how great the show I just mixed sounded. And band members who smile when they see me because they know it’s going to be a great night.”

Several years later, Barbara expanded on her education by receiving a Bachelor of Business Administration, Legal Studies & Entrepreneurship; Management from Temple University. “I had been working in the music industry for about five years, and I was seeing a lot of the businesses I worked for being run very poorly. I decided to get a degree in business because of that. I think it helped me to understand entrepreneurship better.”

During this time she was also working as a Monitor Engineer for Electric Factory Concerts.  “In 2005 I left Electric Factory for a production manager and front of house position at a smaller club called Grape Street, while still freelancing with bands and various production companies. When Grape Street closed in 2008, I started at the Tin Angel. “ At the Tin Angel, I work every show we have which can vary week to week, but averages about 4 shows a week.”  At World Cafe Live, where she’s worked since 2010, “I do mostly morning shows which can be private events, Live Connections sessions, or their weekly kid’s show. The kid’s show is one of my favorites because my son gets to come to work with me and helps me set up.” For the past ten years, Barbara has also been working freelance with DBS Audio and FSP Productions, doing monitor mixing and system tech for festivals such as DC’s Jazzfest, Boston’s Summer Arts Festival,  Appel Farm Festival, Bethlehem, PA’s Musikfest, and many other events.

Keep learning and keep forging on

Despite the fact the she seems to have an endless amount of work, Barbara has had some hurdles to overcome.  “Attitudes… sometimes it is my own. It took me a long time to realize you can’t please everyone all the time.”  Also, “Being a girl in the music business is an obstacle itself. I have been overlooked for positions I was well qualified for because I am female, and I have been through many instances of sexual harassment.”  Barbara has dealt with these situations by enduring and learning from every obstacle, forging on to better herself and her craft. “I get schooled every day I work. I am constantly learning, even after doing this for nearly 20 years.” She also says, “keeping her head up and growing a tough skin” have helped her survive in the business.  Working in sound reinforcement doesn’t leave much time for her to spend evenings with her family or social outings with friends. “ My schedule is the opposite of most people I interact with now, especially being a mom.”

If you want to enter the field of professional audio, Barbara recommends figuring out how you like to learn.   “For me it was school, but if that isn’t your thing, then go out and meet some people. Be outgoing, but not arrogant. Be open to learning, be open to trying things. When things get tough…don’t give up. Keep learning and keep doing it. Listen to the good advice and throw away the negativity. Learn from your mistakes, and you will become better than you ever imagined. “

People skills are first and most important. This is a business of who you know and building a network is critical.

Listening skills, use your ears! Listen to the band and the audience and make adjustments where you can.

Know signal flow and gain structure.  It will make your job so much easier.

From Rolling Stone to AES and back.

“ While I was at Full Sail, I was able to attend my first AES conference as a representative from the school. The school took promotional photos of all of us who attended. The picture they took of me was used a year later in that very same ad that got me interested in production to begin with. It was my face that graced the Full Sail ad in the back of Mix Magazine in 1996.”

When asked about her long term goals, Barbara replied “ At many points in my life, I have wanted to have my own venue. But knowing the amount of money and work that takes, I don’t know if I have that same strong desire anymore. Lately, education has been a focus of mine. I enjoy passing on the knowledge I have gained to the next generation. I am an adjunct professor at Drexel University and am currently looking for other opportunities to teach live sound.” Barbara is doing just that by creating SoundGirls.Org’s ‘Lessons in Live Sound.’

Barbara Adams can be reached at soundarella@verizon.ne

Since this profile ran, Barbara Adams has been busy. We caught up with her for an update!

Barbara Adams is an audio engineer and educator with twenty-five years of experience in the music industry. She specializes in live sound and production management. Her strong and varied experience also includes recording engineer, stage management, and artist management.

Barbara is Assistant Professor of at Rowan University teaching Sound Reinforcement and Audio Recording in their Music Industry Program. She also is the booking manager for Rowan Music Group, the program’s record label, and artist management services. By night she is busy as engineer and production manager at The Locks at Sona, Philadelphia’s premier listening room. She occasionally works as a freelance Engineer/System Tech for several production companies and does freelance work mixing FOH for regional bands touring the North East and Mid-Atlantic states.

As the SoundGirls Philadelphia chapter president, she is always looking for ways to help mentor and guide new engineers in the field of live sound and bring together the Philadelphia community of SoundGirls. And as if this wasn’t enough, she is the mom to a very busy pre-teen son who enjoys helping mom at gigs if he isn’t playing hockey, playing music, or in school.

Michelle Sabolchick Pettinato: A love for music, adventure, and traveling led Michelle to a career in live sound. She is a founder of SoundGirls and blogs about life on the road, and what it takes to succeed in live sound.

In India and having a good time, NOT!
Coachella Music and Arts Festival – Two Companies that Did!