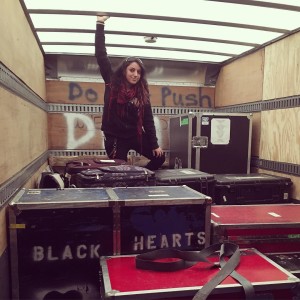 Annie is currently the Lighting & Assistant Tour Manager for Joan Jett & the Blackhearts who just finished up touring with Heart and Cheap Trick. In addition to her Tour Managing position, she is guitarist for her all female band Jackknife Stiletto.

Can you tell me about your experience as a musician and your current position?

I’ve been a guitarist for almost 10 years, been in a bunch of bands growing up on Staten Island, NY. I was able to play CBGB’s before it closed when I was in high school! Currently, I’m in an all-female rock n’ roll band: Jackknife Stiletto. I just started singing for the band as well, which is very new and different for me. We just went on tour in October and literally had four rehearsals with me singing for the first time. Jackknife Stiletto will be booking more tours, have recordings coming out early next year, and we are very excited for it!

How did you get into lighting? 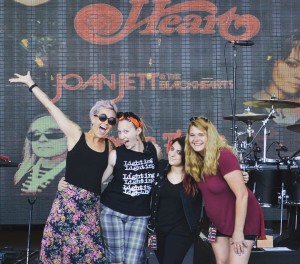 I’ve been working with lighting for about six years. I started at my college theatre: Five Towns College: Dix Hills Performing Arts Center. I really got into programming and learning the different lighting boards. My favorite board is the Grand MA. Most of my jobs after college have involved lighting whether it was on tour, at a venue, or corporate events. I have a lot of fun learning new gear and figuring things out, learning from everyone I meet.

How is managing a band different from playing in a band?

Honestly I don’t think I can tell the difference at this point? Jackknife Stiletto really does everything on our own. But for our recent tour, it was a different experience being the ‘front person’ for the first time. When you’re sitting at the merch booth before the show but realize you need to be on vocal rest and need to go warm up in the van, then jump into ‘artist/musician’ mode and hit the stage to give it your all, then go back on the floor, unload your gear, hit the merch booth again and start asking for new friends to sign up on your mailing list. It’s all very crazy and hectic – I wouldn’t ask for anything different!

Can you tell us how you became asst. tour manager / LD for Joan Jett tour?

I started interning for Blackheart Records when I was in college, after a semester they sent me on Warped Tour and from there, I was hooked on touring! When I was ready to graduate they didn’t have a merch, production, or lighting person so I said I can fill that spot & learn quick – so they gave me a shot the week after I graduated and I’ve been working with them ever since.

Can you tell us how bands get together to go out on the road?

You really need to plan and budget out a tour. Make sure you really research how much gas, food, hotels, showers, etc. are going to cost – you also need to make sure you have money set aside in case something wrong happens (van breaking down). As for my band, we get out our map and play ‘pin-the-post-its’ to figure out where we want to go. Usually, we start out looking where we might have friends, family, and bands we know and start there first. There is also the case where another band might have a tour already booked and we can jump on their routing, both situations are always awesome. There are really great websites like IndieOnTheMove.com & MusicThinkTank.com that have great articles for up and coming bands to read & learn about what they should be prepared for.

What is the biggest myth about going on the road for up and coming bands.

That you’ll come home broke with a pile of groupies in the van? Here’s the reality: Booking your own tour is A LOT of work! You don’t have to come home broke. There are plenty of ways to keep your expenses low on the road and as long as you’re working hard and hustling your merch – you should come out okay! Sometimes yes, you might loose money. We get one hotel a week (if that), sleep in the van at the truck stop & shower there (yes, they are actually nice showers!!). You can keep food expenses down by stopping at a Wal-Mart, bulking up & the usual Waffle House stop post-shows. Even if you play a show to five people in the middle of nowhere – it’s still an important show. As long as you’re killing your live performance, those people will buy your merch & tell their friends to come see you next time you are in town. Every show counts, every person in the room counts.

Do you feel that being a woman makes your job harder or easier….or has that not been an issue?

I don’t feel like it has made much of a difference to me. But there is the “oh you can’t lift that” aspect that some guys will say to you from time to time. Fortunately, I’ve had great experiences on the road, and met some very cool people. There’s always some weirdo or jerk that will say or do certain things that might not like ‘chicks working in the industry’, but I just ignore it and carry on with the job I need to do. Not everyone is going to like you whether you’re a male or female. Some people just aren’t cool!

What is the main reason a band tours?

I think touring is the best thing an up and coming band can do. You’re getting your music out directly to new people instead of just through a screen. There is nothing like being able to meet fans & new friends on the road and giving them sweaty hugs right after a set! And for your band itself, it’s a great way to see if your band even gets along on the road! Touring is rough: there’s little sleep, horrible food, loading and unloading gear, driving through the night. You’ll find out soon enough that some of your band members aren’t cut out for the ‘touring lifestyle.’

What are some of the biggest problems you have faced during the tour?

As an all-female band we do get the occasional ‘creepers’ on tour or as we like to call them, Stalkers! Some people always ask us ridiculous questions such as… “Isn’t that heavy?, Why do you carry your own gear? I’ve never seen a woman carry a half-stack and a bass drum down ten blocks.” And we know they aren’t trying to butter us up, you can see it in their face, the surprise that this is happening. We do everything on our own in this business, booking the tour, driving the van, loading gear, calling radio stations, websites, artwork, etc.. There are still people that come up to us and say that they’ve never seen an all-female band live.

On the upside, the van smells a lot better!

What advice do you have for women who want to work on the tech side of touring?

Learn as much as you can and don’t stop learning! I’ve never taken a class in lighting or selling merch or how do run a meet & greet. Any part of the business you may like or even think you might like it – learn more about it! I love doing lighting but I still have so much to learn. I also love selling & managing merch, production, meet & greets, etc. I always try to work any part of the music industry I can. The more you know about different areas, the more valuable you are. If you don’t have the experience, there are plenty of awesome people you meet at gigs that would be happy to let you pick their brains and let you shadow them. Oh and network, network, network!!

How has it been working with rock icon Joan Jett? 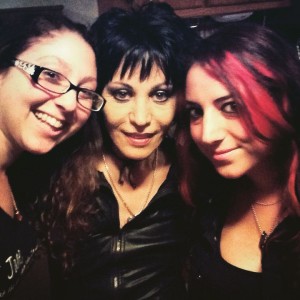 It’s been very cool!! She’s inspiring as an artist & a woman. The whole Blackheart family is awesome, it’s a pleasure working and learning from everyone. I couldn’t thank them enough for taking a chance on me when I didn’t have much experience, but I’ve been learning as much as I can from them since day one. To be able to experience traveling around the world, meeting artists & people I never thought I would – it’s amazing! 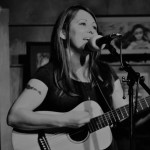 About Victoria: Victoria holds a BA in Psychology from the University of California, Santa Cruz.  She is a singer-songwriter, musician, performing with several bands- one of which specializes in children’s music and is targeted at pre-school age children.  Victoria is passionate about building up the community through Fine Arts and making the arts more accessible.

What is the Fair Labor Standards Act?
Military Music