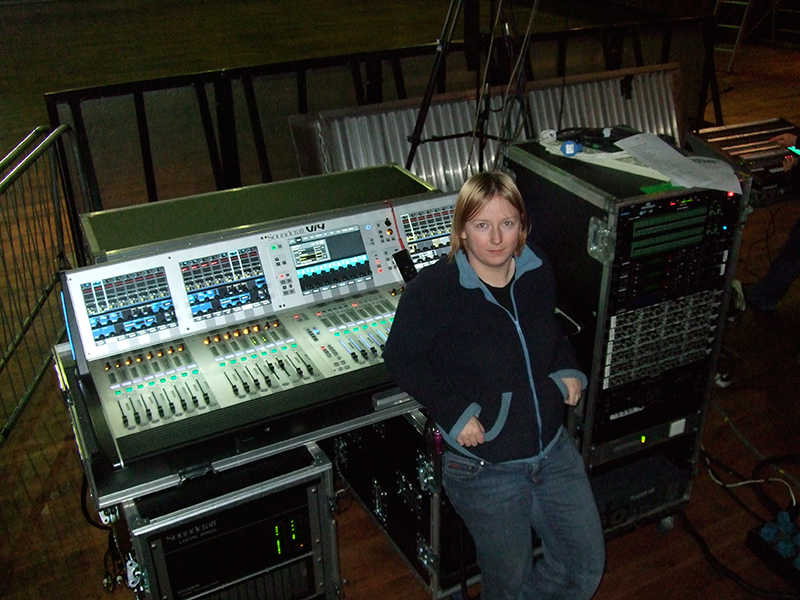 Kim Watson- You Have to Learn From the Best

UK-based sound engineer Kim Watson has been a freelance audio engineer since 1999.  Kim’s foray into live sound started with a love of music and a desire to work in the music business.  “I always knew I wanted to be in the music industry, I just never quite knew in what respect.”  Although having started her training in recording school, she found recording sessions boring and monotonous.  Kim was attracted to the challenge of live sound, “having one chance to get it right and then, that moment is gone.”

It never hurts to ask

While she was at a show, Kim approached the FOH engineer to whom she expressed her interest in live sound.  Luckily for her, he was the owner of a local PA system and gave her a call the next week to show up for work.  Kim recalls how she was the 3rd person on the show and was ‘paid in pizza and information.’   It was a proper sound company, and Kim spent the next three years learning as much as she could.  “First thing he showed me was how to coil cables.  Then how he wanted mics plugged in Stage box end first, roll the cable to mic stand, so it lies flat, coil left at the bottom of the mic stand in case it needs to move, etc…” She got on very well with the crew, earning their respect by getting her hands dirty, asking questions, and learning how to not get in the way if a problem arose.  Her fellow crew guys became very protective of her, jumping in if anyone gave her a hard time.  One bit of wisdom she retains to this day, ” If a mic goes down on stage, you have 30 seconds to fix it before everyone notices, and the band stops the song and kills the flow of the show.”  Kim paid close attention to the crew guys when they were talking tech, ” At first I didn’t understand much, so I picked up on words- ‘Crossover,’ and would then go home and research what it does.  The next time I would ask questions. I made it my mission to read the Live Audio Boards every day, even if I didn’t understand it, things would sink in.” 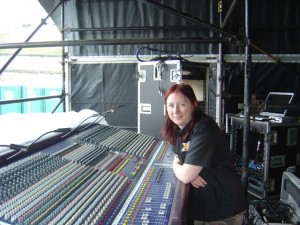 Four years later while she was working with another company, Kim would get her big break as a monitor engineer, when she got drafted to replace a co-worker who didn’t show up for a festival.  It was a 50’s Rock and Roll weekend with ten bands a day and a crash course in mixing monitors.  “First time on the monitor board was fun.  Feedback wasn’t so much an issue as we set up the day before, and Barry, the guy I was working for, had me ring the monitors out, teaching me as we went.  Barry introduced me to the principle of subtractive mixing, pulling back something that’s in the way of the item they want more of, be it through EQ or nudging the aux back a touch”, she says.  Kim’s been doing monitors ever since.

She is currently the monitor engineer for The Subways.  When she isn’t touring, Kim works freelance for PA companies, such as ESS (based in Mansfield), and is also an audio tech for the O2 Academy in Newcastle, UK.  Having a sweet house gig at the Academy is a huge advantage for Kim, being that she can always find work in the downtime between tours.

Kim is an experienced system/fly tech and more than capable of mixing FOH when required, but most often finds herself at the stage end of the snake.  “Primarily I tend to end up being Monitor Engineer and these days specializing in mixing IEMs.”  The close interaction with the band and the on-stage shenanigans that the audience doesn’t see is one of the things she enjoys most about doing monitors. 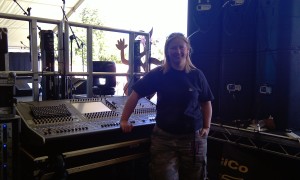 During her school years, Kim went to careers meeting with her parents where she was told that being a “sound engineer” wasn’t a real job.  While her parents tried to guide her to a more reliable career as a music teacher, she knew it wasn’t for her.  “It wasn’t until after I had started work experience with the PA company, that they realized it could be a job, but I would have to MAKE my way job in the industry.  For me, it was all or nothing.  I got into the habit of giving 110% on every show.  People are always watching, and that is what gets you up the ladder.”

Her educational background includes; studying music throughout her school years, Technical college, which included education in Music Tech, Math, Computing, and Physics, also getting her HND* in Music Production, while she was cutting her teeth working at the PA companies.  Kim also plays several instruments and has a background in music theory, which she finds very helpful in mixing.

Kim continues educating herself to this day.  To keep her chops up, besides working and mixing as much as possible, Kim also makes an effort to attend manufacturer’s training seminars.  “I did the Meyer Sound Comprehensive System Design (5 days) and the SIM3 (5 days) courses a few years ago.  I learned so much from both.  Understanding a lot more about the physics behind the sound system, audio interactions, and system measurement has helped a lot.”  Kim is also grateful for having studied Physics at College; she says it “made understanding the principles of phase and wave interactions (in wave theory) very easy.”

She has done training on every digital console she could get her hands on.  “I have always been a computer nerd and got my head around digital desks very early.  I am one of those engineers, that even though I have never used a certain type of board, I can make the show happen the same as I would on analog.  This makes festival walk-up gigs really easy.” 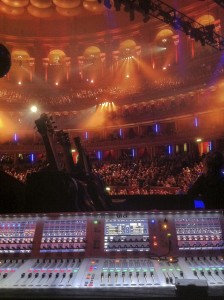 For The Subways, who she’s been with for going on two years, Kim is mixing IEMs.  The band usually carries their own LS9 and Sennheiser transmitters, and she’s hoping to have them fully self-contained on stage by next year’s tour.

Kim has been working for the O2 Academy since it opened in 2005.  Recently, she was Monitor System Tech for the two UK legs of Emili Sande’s tour, Monitor tech and Fly tech for Brit Floyd UK and Europe, and Monitor Engineer for “Wow- A celebration of the music and artistry of Kate Bush.”   Kim loves the people she meets on tour.  Familiar friends of The Subways will show up at their local gigs, sometimes joining band and crew on the bus for a few days.  She is also lucky enough to work with a band that enjoys organizing days off in towns with something interesting to do or see, such as visiting a castle or museum.

Lack of sleep is the hardest part of touring for Kim.  “There have been a few tours where hours of sleep at night are very minimal, with lots of back-to-back shows.  That nearly killed me, pushing me right to my limits and making me quite ill.  It’s learning to get the balance.  When you are on tour and you have the option of one of- shower, food, or sleep – choose wisely as it can be your undoing.”
While she admits to having difficulty picking a favorite piece of gear, since gear is always changing, she says, “ My favorite piece of gear is the one that works when you plug it in, and it’s right for the job at hand.”

From the start, Kim’s long-term goal has been to be in the top 10% of live engineers.  “I was told early on by one of my mentors, to be the best you have to learn from the best.  I went out and found out who the top engineers in the world were and read everything I could online that they had written, (through prosoundweb.com and other sites).  It’s been awesome over the years meeting, working with, and hearing the engineers I looked up to.” 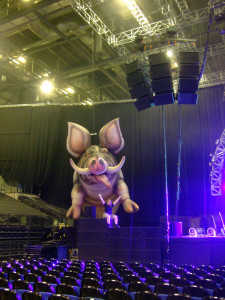 When she first got started in the business, Kim asked another female engineer for advice which she quickly adopted as her own rules.

And one final word of advice: “The most important skill in this job is attitude.  Do it all with a smile and your day will be very easy.  Become a ‘yes person.”

*An HND is roughly the equivalent of two years of university and generally vocational in nature leading to work in a specific industry and entry into advanced levels of the university, somewhat similar to an Associates degree in the USA 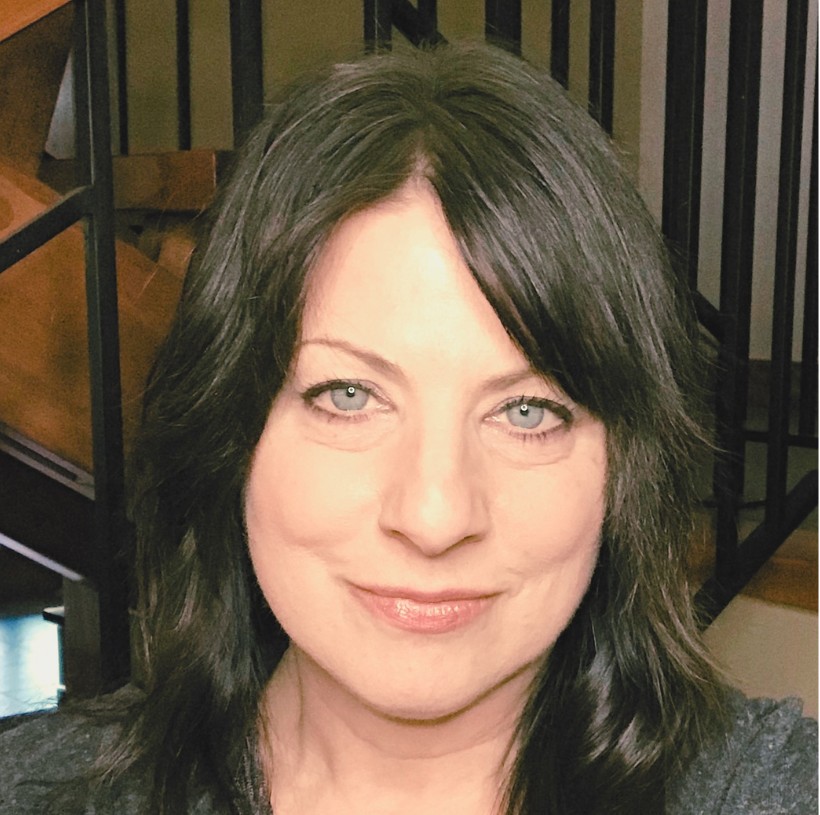 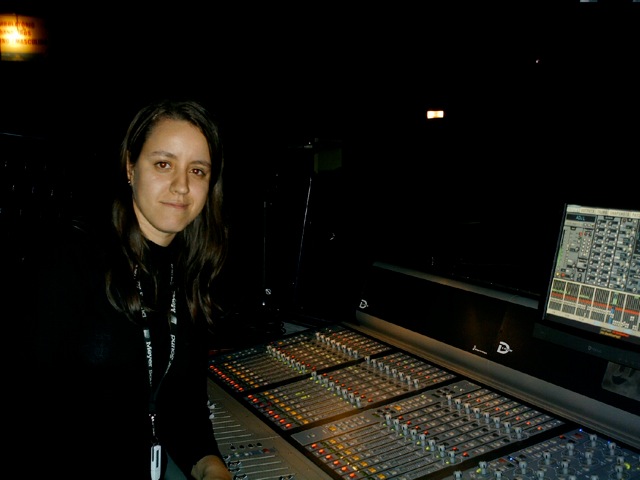 Breaking Down Doors in Brazil

Thirteen years ago Fernanda Lemos was a musician in a rock band; today she is the only woman working as a sound engineer for Loudness, the second largest sound company in Brazil.
Read the Full Profile 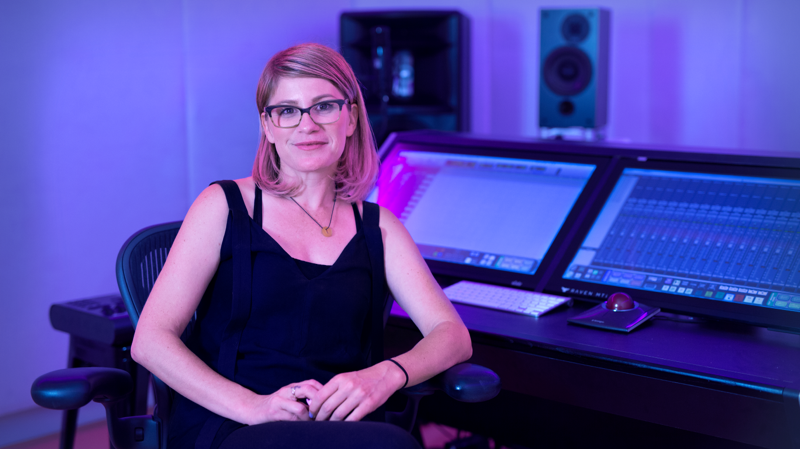 Erika Earl – Always be yes-sing! (say it out loud)

Practice, patience, and a relentless desire to succeed -Erika Earl is the Director of Hardware Engineering at Slate Digital where she directs teams and engineers in the technical development of hardware products from concept to launch.
Read the Full Profile
X
We use cookies on our website to give you the most relevant experience by remembering your preferences and repeat visits. By clicking “Accept All”, you consent to the use of ALL the cookies. However, you may visit "Cookie Settings" to provide a controlled consent.
Cookie SettingsAccept All
Manage consent