Mudhoney over their twenty-five + year career has inspired and influenced many musicians and fans. One night in 1998 they inspired a young woman to become a sound engineer.* Christina Moon found herself at a Mudhoney show at Summer Nights at the Pier, and walked up to their soundman and asked him “What she had to do to be him?” He gave her great advice recommending classes in music technology at Shoreline Community College and to get involved in the local club scene”. Christina followed his advice and started interning, and within the year things started to click for her.

Christina says she has worked at every club in town (Seattle) and got her start at the Central Saloon. Having met a gentleman named Purple Perry at the infamous Crocodile Cafe who invited her to come hang out with him at the Central. She took him up on his offer and pretty soon she was working a few nights on her own. Unfortunately, for Purple Perry, he made a singer cry, and Christina soon found herself working all of the nights. Christina worked at the Central for five years while working any other gigs she could. Corporate shows, stagehand, small runs of the Northwest with local bands – Anything and Everything. Christina says she learned “soooo much from being in the clubs. You don’t know as much as you think you do until you are thrown in the fire”. The most valuable skills she came away with were how to troubleshoot and how to handle different temperaments from artists.

Soon Christina found herself interning and working at Studio X and with a recommendation from the studio manager landed a gig at Carlson Audio. She worked at Carlson for about six years and during her time there honed her professional skills. She learned how to fly sound systems and was able to gain valuable technical skills. Christina says of her time at Carlson “I thought it was all about being able to put up a great mix, but no, it is so much more.”  A moment of accomplishment came when Carlson trusted her with a truck and PA and sent her alone with a broken arm to Portland for a Queensryche show. 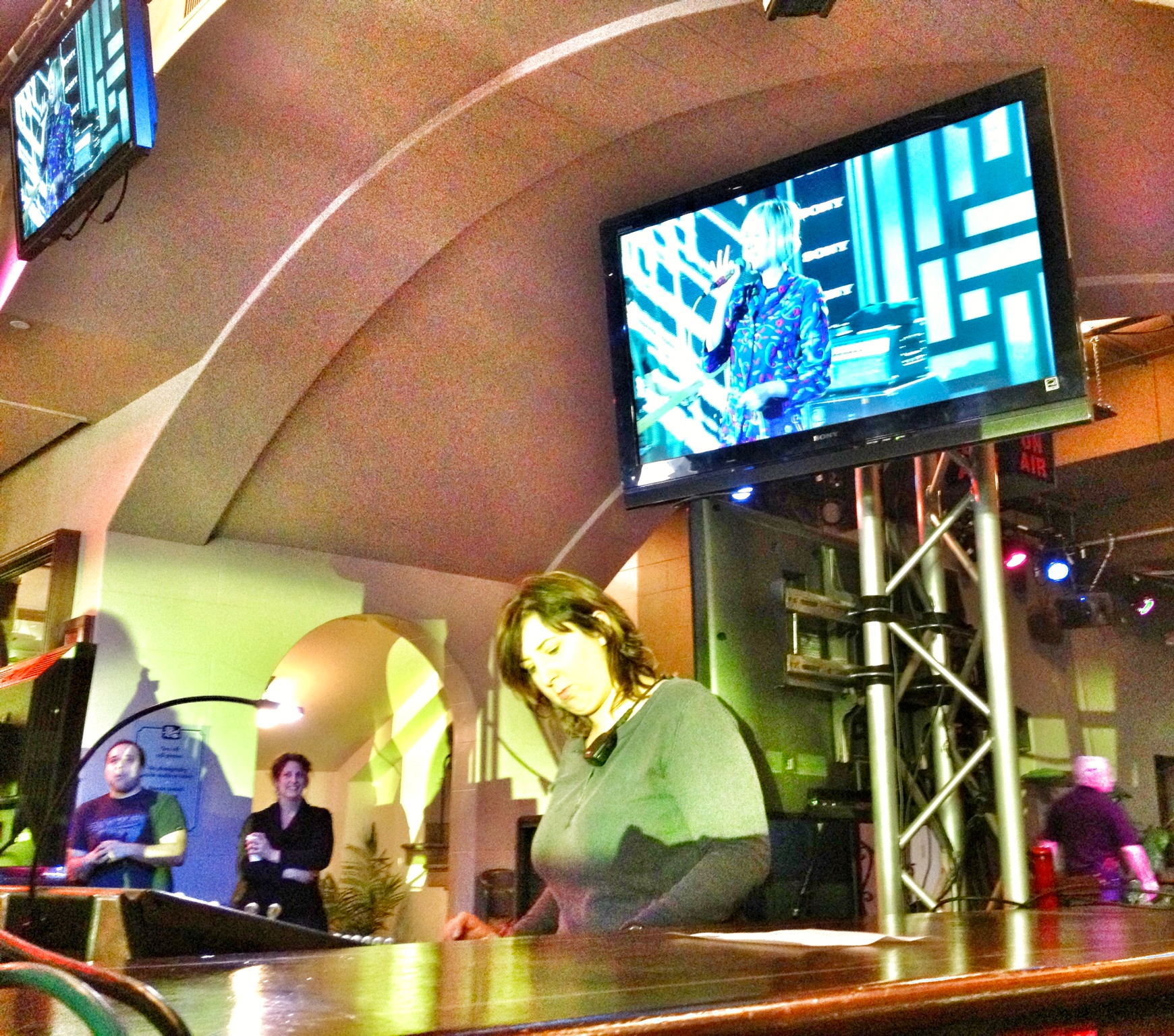 Christina has been working in the industry for fourteen years and works with some of the most prominent alternative acts today. The Yeah Yeah Yeahs, Death Cab for Cutie, Cat Power, and LCD Soundsystem to name just a few. Christina mixed FOH for a long time but over time became known as a monitor engineer. While she did enjoy FOH, she has no desire to return. She prefers working on stage trying to figure out “people’s quirks.” Christina spends anywhere from eight to eleven months a year on the road and enjoys dining and spa-ing her way around the world. Australia is her favorite place to tour and hopes to get to Russia and Africa eventually. She has no advice for balancing tour and home life – other than she knows who her true friends are.

Christina has her favorite tools – An Avid Profile, D&B M2 or M4 Wedges, and Ultimate Ears for IEM acts. Christina’s acts all have specific needs, and she finds that the Avid Profile and the snapshot feature allow her the most control to manage changes during the show. For acts using IEMs, she throws an external time clock on the console to tighten everything up. The Yeah Yeah Yeahs and LCD Soundsystem only use wedges, and with both bands volume is essential. She works closely with the FOH engineer to make sure “we’re not stepping on each other’s toes and leaving frequency holes, so we both have a good time.” A huge fan of D&B Christina uses M2 wedges and C7 sidefills for the Yeah Yeah Yeahs. Christina elaborates “The biggest challenge with this band is Karen’s vocal mic. She goes from being a quiet, demure singer to swallowing her mic with her face buried in her wedges. With the M2’s “I can get the volume that I need, and the double 12’s have an edge that I feel manage to poke through stage volume”.

LCD Soundsystem used 20 mixes of M2’s and M4’s with Q1’s and C7’s to get a club sound on stage. James Murphy singing thru a vintage Sennheiser 609 had an exact vision of the sound he wanted, and Christina used a combination of M2’s and M4’s to get his sound.

Death Cab For Cutie – A challenge as all of the guys in the band are producers with their own studios and can hear EVERYTHING. Christina does appreciate the fact they can tell her exactly what they are hearing and want. DCFC are all on IEMS.

Digital or Analog? Both have pluses and minuses. Nothing beats the warmth of an analog preamp. But the footprint of outboard gear is a bummer. So I’m going to have to say digital because you have everything at your fingertips.  I’ll take the extra ins and outs, comps, and eq’s. Digital preamps are getting better, the new Midas’s sound great.  Also, I could not go back to a day without snapshots. My setlists used to be covered in cues and some days you just didn’t get to them all. Now at a click of the mouse, all of my changes are made. Love that! So do the bands, it’s the same every night.

I would say that I’m my biggest obstacle. Making myself face situations that are new and uncomfortable, always good to do that. Every time I start a new gig, I’m not 100% sure I can pull it off. It’s not just about your skills; you never know if you’re going to fit into the new scenario. I always come away a little more confident though. Advice you have for other women and young women who wish to enter the field? Get out there and get involved in anything and everything you can. That really helped me find what role I would be best suited for.

Would you recommend Shoreline Music Technology program for young women starting out?

Yes, I think it’s a nice place to start. I don’t know if the program is the same, but you had to explore a lot of the different aspects of music production.  Analog recording, digital recording, live audio, with two years of music theory.  I feel it was a well-rounded learning experience.  Was I ready to get a job after this?  No, but I think it was a good foundation for me and gave me the opportunity to figure out what I was interested in.  It’s not for everyone.  I think that most of what you learn comes from on-the-job experience and interning.  Until you actually experience something, I don’t think it sinks in.

What discrimination if any have you faced? How have you dealt with it?

Sure you’re going to run into some dudes that just wanna be around dudes.  I really don’t care, and you deal with it by going out and killing it at your job.  Usually, by the end of the day, they wanna be your friend.  But for the most part, people are really nice and supportive.

Best show ever? And why?

I think my best show ever was the last LCD Soundsystem show at Madison Square Garden.   It was the band’s last show before retiring, and everyone worked really hard to make that show great.  Lots of dancing, champagne, and tears.

Shannon Deane has been working in post-production sound for over 15 years. Shannon has been working as a freelance engineer for the last ten years, and her specialties are sound design, editing, and mixing for film, TV and new media. She owns, operates and works as creative director and ninja for DeaneCreative.
Read the Full Profile

LP spent the better part of four years touring the country in a van, honing her skills as a fierce performer. Her songwriting credits include the Backstreet Boys, Rihanna, Christina Aguilera, and Joe Walsh.
Read the Full Profile

However, the icing on the cake would be if I’m not the only Black, femme, and LGBTQ person on those technical teams. In a few years when I can grow as a businessperson, I want to have the power to train and recruit diverse engineers, A2s, foley artists, dialogue editors, etc who look like me.
Read the Full Profile
We use cookies on our website to give you the most relevant experience by remembering your preferences and repeat visits. By clicking “Accept All”, you consent to the use of ALL the cookies. However, you may visit "Cookie Settings" to provide a controlled consent.
Cookie SettingsAccept All
Manage consent