What are you going to stand up for this year? 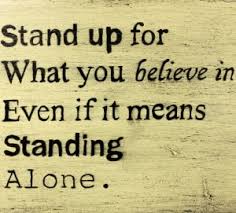 There is a story in We Should All Be Feminists by Chimamanda Ngozi Adichie, from her childhood in Nigeria. Her teacher told her class that the student with the highest score on a particular test would become the class monitor. But when Adichie got the highest score, her teacher said the class monitor had to be a boy. So the job was given to a male student. At the end of the story, she says this:

Adichie’s words resonated with me, as I’m sure they resonate with many women working in sound. How many times have you experienced an automatic assumption that sound engineers are male? From the upfront “Oh, I thought you’d be a guy” when you arrive at a gig, to articles in industry publications that consistently use male pronouns when referring to sound engineers, to the lack of women on industry panels.

Last year I was invited to speak on the panel of an audio event. One of the questions put to me was why I thought there were so few women working in professional sound. I asked the audience to consider how visible women are in the industry. Open any industry magazine and count the number of women featured in it – that is to say, women interviewed or profiled, not just included in photographs (although that’s worth noting as well). Unless it’s a publication specifically aimed or about women working in music and sound, I can guarantee that there are significantly fewer women featured than men.

What message does that send to girls and young women wanting to explore a career in sound? Just as Adichie says, if we see something over and over again, it becomes normal. At the moment the industry reinforces the message that it doesn’t look “natural” for a woman to become a sound engineer. As I told the audience at this event, if a young person looks at a career path and they don’t see someone with whom they can identify, then they will be far less inclined to go after that career path.

After the panel, I chatted with organisers of the event, and we discussed the lack of women in the magazine published by their company. One of the organisers suggested that this was because their publication reflected the current makeup of the industry (mainly men) and that they’d include more women if there were more working in the industry. My response back to her was: it may be how the industry looks at the moment, but do you want it to look this way, always?

The turbulent political and social events that shaped last year served as a clear reminder to me that if I want more women to feel they have a place, in general, and in our industry specifically, I have to fight for it. I want to see more women in the sound industry, more active supporters of women working in sound, and more girls and young women actively pursuing careers in audio.

There are many forms of active support. You can speak up when you hear or read bigoted or divisive rhetoric. You can write to industry publications and conferences and ask them about their commitment to diversity. You can volunteer your services to your local SoundGirls chapter for community outreach programmes and be part of encouraging and educating the next generation of sound engineers. Show them that there is a place for them.

Whatever you choose to do, it’s important you act on it. Aim to be heard. The challenges that you see won’t change on their own. This year, what are you going to do about them? How are you going to stand up?

SoundGirls NAMM Sunday Breakfast
On Diversity in the Industry