Tips for Getting the Vocals on Top Down in the trenches of clubs keeping the vocals on top of the mix and loud enough in the monitors is a challenge. Here are some strategies that Karla Barrera utilizes. What tips do you have?  Let us know @ soundgirls@soundgirls.org

The biggest problem I have is when mixing loud music like punk or metal is how to keep the vocals loud enough. When the musicians don’t hear themselves in the monitors, and they are on the edge of feedback?First of all, the sound starts with the stage volume always. You need to control your stage volume right off the bat.

First of all, the sound starts with the stage volume always. You need to control your stage volume right off the bat.

Check levels starting with the Kick drum and beyond. Once I get to the bass and guitars, I listen to what is coming off the stage and if you feel like the stage volume is too loud, here are a few things to think  about

Is the bass the tone too woofy and boomy? Instead of having the bass player turn down his/her level, should I suggest changing the tone a bit? (Familiarize yourself with the EQ knobs on bass amps, usually Hi, MIDS, LOWS, CONTOUR,  ETC… EXAMPLE: “Can you back off the low mids a bit so that the low end won’t wash out the vocals in the monitors? ”

Is the guitar just too loud? Should I suggest turning town some of the high-end on the guitar or should I have them turn down the master level? Can you get them to warm up their tone? Example “Maybe warm up your tone a bit to give more space for the vocals.”

Should I suggest to the guitar player to face the amp towards the wall so that the amp won’t bleed into the vocal mic as much and shoot at me/the audience? (some guitar players do not want to turn down because they want to keep their tone.)

Try to get the guitarists/bass players to run thru all of their pedals. Have them toggle through their boost, clean, distortion channels to search for any dramatic level changes that will change mix too dramatically. Take a moment and work with the guitarist. What you are looking for is consistency through levels. The boost will naturally be a little louder, because, well it’s a boost pedal for solos. Once you take a moment to check their pedal levels, you are that much closer to having control of the levels coming off stage. EXAMPLE: “Your clean channel is much louder than your distortion. Can you back off your clean level and turn up your distortion to even out the levels? ”

Don’t be afraid to school musicians. Let them know nicely that sometimes their tone does not translate the same as it does in their rehearsal space as it does in your venue. (which is why you give them these suggestions). Some musicians don’t play live very much.

Once you are done with the basic sound check line check and you are ready to hear a quick song during sound check, turn off the PA and let the band know that you want to hear what is coming off stage first before you turn up the PA and you will turn up the PA shortly. Listen carefully to the stage without your mix (30 – 60 seconds or till you hear a loud part kick in) that way you can tell what is actually happening on stage before you start turning things up.

Once you have done that, start turning up the vocals, get them nice and loud before you turn any of the band up. If you can’t get the vocals loud enough before putting the band in the PA the band should turn down, flip amps around or change tone. Sometimes, it’s the snare, or the cymbals and drummers will absolutely not hit softer. They hate that.

EXAMPLE: “Right now, I am struggling to get the vocals loud enough, and I don’t have any instruments in the PA, do you guys mind turning down a bit and I’ll put more of your guitars in the monitors?” (note this is not decreasing the stage sound and will not be ideal for a struggling vocalist)

EXAMPLE: “Any way you can tape your cymbals a bit? They are much louder than the vocal right now.”

EXAMPLE: “Can we mute your snare a bit with a little bit of gaff tape on the snare? It’s bleeding straight into the vocal mic.”

When you are mixing, and there is a certain element on stage that is sticking out too much, just take the snare mic or guitar mic or hi-hat out of the house. You may not even need it because it’s loud enough coming off the stage.

The 2nd problem happened to me for the first time last night. I put Shure Beta 91 inside the kick drum but later changed it to AKG d112. I had a feedback coming from somewhere when the drummer hits the kick which stopped when I muted the main vocal microphone and the guitar microphone. We turned away the whole guitar cabinet, and it got better.

Both are great mics, but here is where you should start:

First of all, you need to EQ the monitors before the band arrives to make sure there is no feedback on stage BEFORE the band arrives. You need a graphic equalizer on every monitor mix and find all the frequencies that are feedback and need to be cut out.

Once you stabilize the stage, check the lead vocal in the house before the band arrives. Get a long XLR and take the mic to FOH if possible or have someone check the mic for you while you are at FOH. Make sure you have a graphic equalizer on the house too and get it as loud as you can. When you hear feedback, start taking out those the frequencies that are feeding back. You can download an RTA mic app that can help you see the offending frequencies that way you know exactly which frequency to cut (I use the app FrequenSee)

The kick drum was making the vocal mics feedback because you had them cranked so loud and you were not equalizing the monitors or the PA properly. Think about the basics. GAIN STRUCTURE IS EVERYTHING! Less gain before feedback. Instead of gaining up your vocal, turn up your monitor outputs to +5dB that way you have more headroom to turn up before reaching for the gain knob.

Should the bands be less loud on stage? should I reconsider my mic techniques?

Maybe, try my steps from above to make sure you have control of the stage. Trying new mic techniques could work. I would have to know what you are doing. 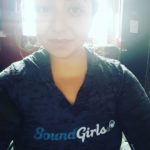 Karla Barrera is a sound engineer at The Roxy and works freelance around Los Angeles. She previously worked as a Production Manager and Sound Engineer at The Viper Room. Karla is also the artist manager for Imaad Wasif. She attended The Arts Institute of California.