This Show Must Go Off

Episode One: The Sudan Archives at Bowery Ballroom. March 12th, 2020.

I had started this blog with the intention that small venues would be re-open by this point in the United States. I remember early March, deciding to close our doors, knowing that the city-wide shutdown was imminent. Thinking it would last a month, at most. “Get some needed rest, file for unemployment, we will all get back to it before you know it.” I remember welcoming the little break. Having worked through all of the holidays, and truly needing some R&R. Weeks turned into months, and we approach one year without a definite reopen date. Thanks to the incredibly smart, dedicated work of N.I.V.A (the National Independent Venue Association), and the heart and soul of everyone that works at The Bowery Ballroom, we stand a great chance at coming back from this thing better and brighter. It is my hope that we continue to be a positive experience for all artists, crew, staff and patrons that come through our doors.

I want to take you through a show at our venue step by step, pre-Co-Vid. In hopes that giving you this inside look will help you grow in whatever path you decide to pursue.

We barely debated rescheduling the Sudan Archives performance on March 12th. They were coming to Bowery from a fairly long tour. On our side, we had seen admission steadily and noticeably decline since the beginning of March, but nothing to call a deal-breaker. When asked if they would like to go ahead with the show, there was no question in their mind, this was their New York play, and like so many other bands, they wanted to make it special. Plus there was a videographer from German Public TV looking to document the performance.

As with most advancing, I let the artist take the lead. At our capacity, most artists are traveling with a Tour Manager, or someone fairly experienced in management, and can properly organize their tour, and translate it to the house. This was no exception. The TM/FOH was professional in every sense of the word; nice, extremely easy to work with, talented, and familiar. Our paths had crossed when I was traveling in Atlanta a few years prior.

As is industry standard, this advance email came in one month before the show date, and had everything I was looking for:

–Point of contacts and multiple ways to reach them

-Load in needs and Questions

-Proposed Production Schedule/Run of Show (*Though important note, the door/show timings are usually somewhat planned in the booking/contracting/ticketing phase.)

-Hospitality Requests, number of people for dinner (buyouts) and Questions

– Merch info and the request for a house seller

See the consolidated and annotated version of the tech rider: 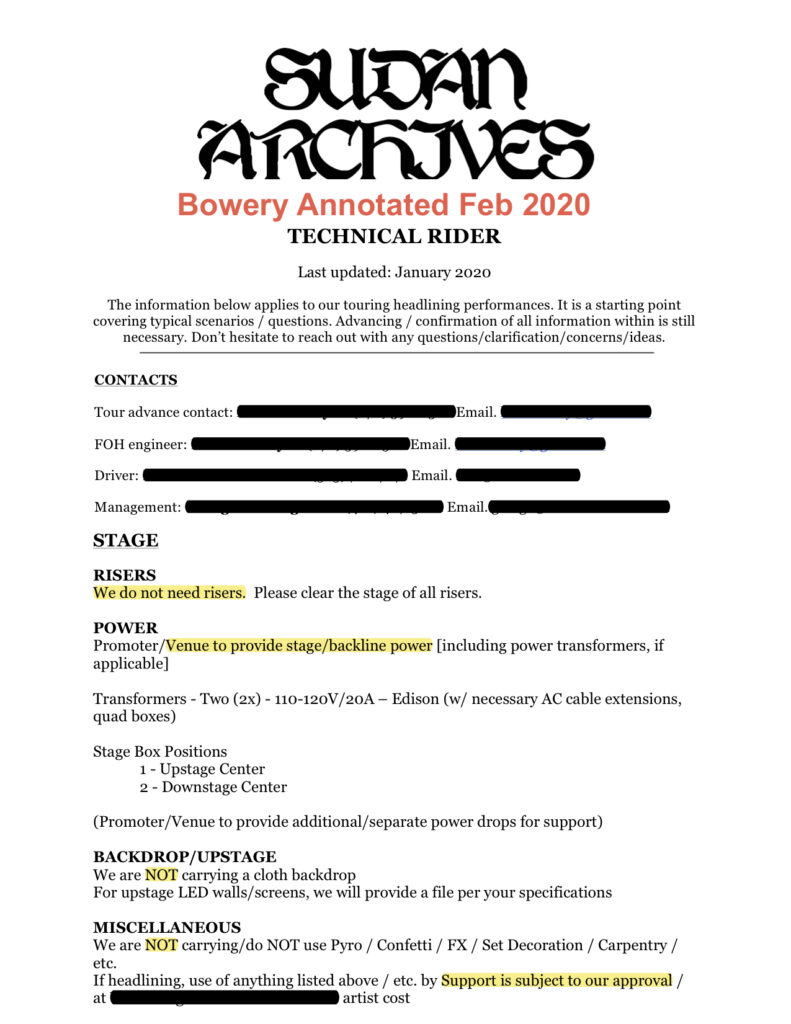 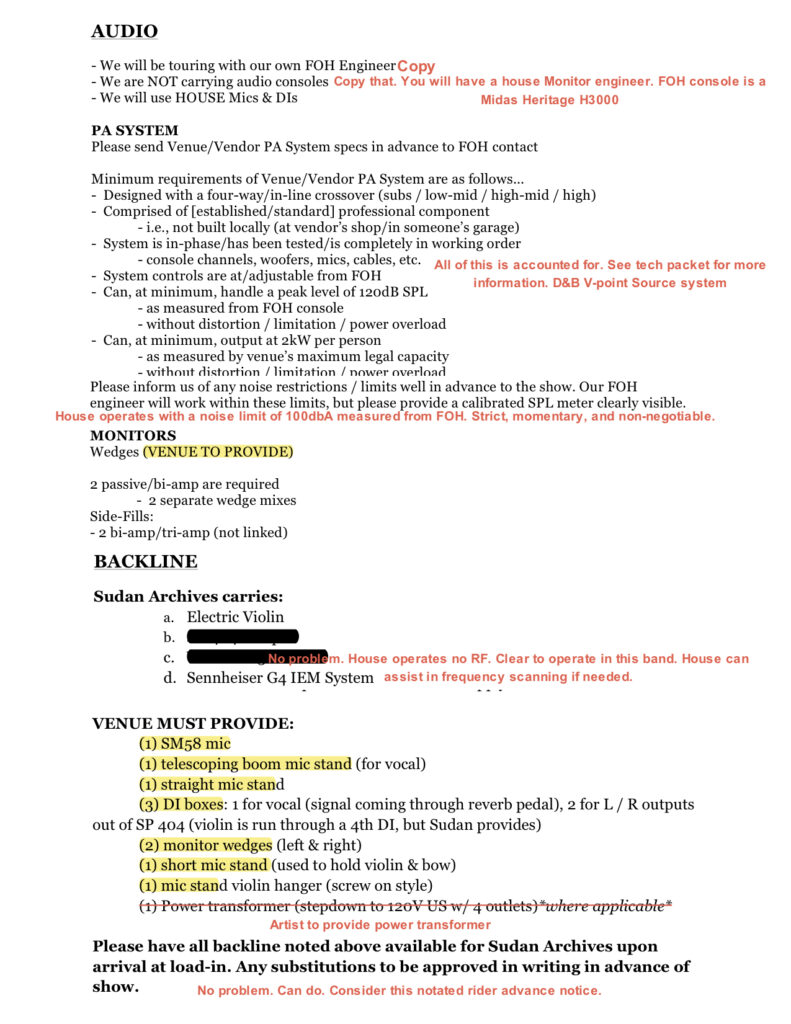 This show took all of a few hours, and a follow-up phone call to sort.  There would be a Front of House engineer, Monitor engineer, Lighting Designer and myself as Production Manager, and load in would begin three hours before doors. Then, as can be expected for New York, the special requests come trickling in.

About a week before the show, I was given word of this German film crew looking to document the night. Typically this is one that the House Manager and I tackle together. Our venue is one of many that charges an origination fee to film the façade, or inside of our space. We also require prior written approval from our promoter, as well as the artist, to ensure everyone is on the same page with permissions.

*Learning moment for any new TM’s out there, always get any photo/video information to the venue as soon as possible, and make the artist/film crew aware that there could be fees associated before they lock anything in. Smart artists/crew work with the film team to make sure they handle all necessary fees. Others are often surprised and disappointed by the price sticker at the end and wish they could have invested that money differently.

In this same vein, the artist management put in a request about three days before the show for a barricaded photo pit. At our venue, in particular, we do not own a barricade, nor do we usually barricade the front of the stage. To me as a concertgoer at the venue, it is part of what made seeing my favorite artists so special. To others, it could prove a headache. I had to decline this request and offer substitutions of balcony space for the photographers. To bring in a barricade (this point at Artist Cost) would be over $1,000, and cut sellable capacity significantly for the venue. The second point was the real deal-breaker. This was a sold-out show, and we simply did not have space. Even with attendance dwindling because of coronavirus, it is our responsibility to assume that all will come, and have a safe space to stand.

The final string to tie up was with support. About a week before the show they provided their stage plot/input list, and tax form for settlement. 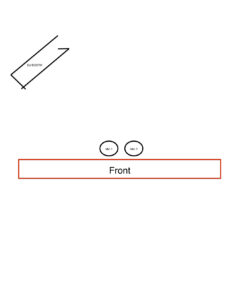 Simple, and undeniably clear. Pro tip: Always make sure your stage plot has your band name, and contact information listed on the document, and that the file is labeled accordingly. PDF’s are everyone’s friend. They had asked about visuals for the performance, which is fairly easy to get sorted here. 6,000-lumen projector exists as part of house equipment for artists use. We do advance that the artist provides the media server, which is typically a laptop or some sort of computer, with the content, and that it is able to connect via a VGA cable (which the house provides). The support artist was on tour with Sudan Archives, and it all made for a very seamless and transparent advance.

There was one final check-in the day before the show, to make sure no other higher powers had canceled. I told the T.M. we were trucking along with business as usual, and looking forward to it.

The crew always gets the abridged version over a calendar invite looking something like the following: 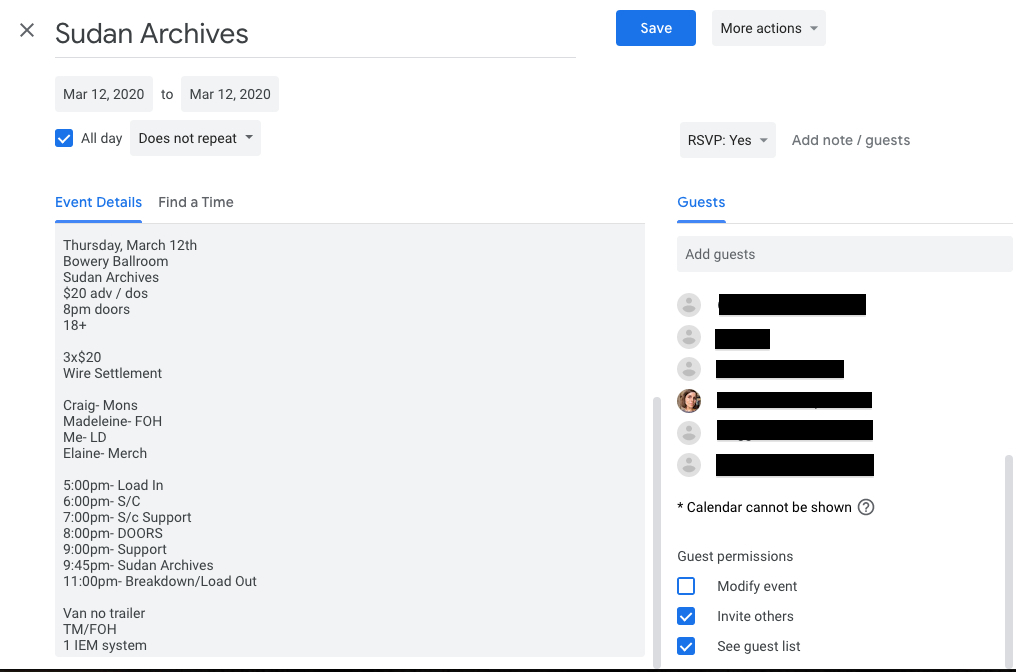 When hearing of the addition of the film crew, as well as the imminent shutdown, I had hired a lighting designer more comfortable with film and focused my attention on advancing this shut down information with the remainder of our March shows.

I arrived sometime between eleven and noon to start my day at the club. Checking everything over, answering emails, ordering the hospitality, and sorting any last minute needs for the event.  Once load in begins, I shift my responsibilities to whatever tech role is needed for the day. Though it can be demanding, being able to regularly mix for a venue where I manage, is incredibly rewarding, and often makes all of the mundane computer work worth it. I am sure many other TM/FOH engineers can agree.

The green room was set up by 3:00 pm, and the house crew started to arrive at 4:00 pm. PA, consoles, Monitors, and lights are all tested before the artist arrives. If the stage was not cleared of decking from the night before, now would be the time to clear it. I shared any last-minute notes I received from the show, made sure the crew had printouts of the riders and stage plots and I’m sure casually, and ignorantly joked about the coronavirus.

Load in was very smooth and as expected. Merchandise took up the majority of the space in the van, followed by wardrobe, then production. Lewis quickly tackled the artists’ key needs of the day within the first hour and was getting soundcheck underway as scheduled. There was a last-minute addition of the use of atmospherics, to add to the light show. I secured the permits, notified the LD, and as is standard for us, our LD has a conversation with the artist representation about the look of the show, and how to execute something effective.

Support was on stage to soundcheck by 7:15, just after our Merch Seller arrived, and we were ready to open doors at our scheduled 8:00 pm. Typically if a house seller is requested to sell the artists’ merchandise, a flat fee is paid to the seller and must be approved by the artist as well as the house.

About half of the patrons who purchased tickets actually attended the show. It made the worry of the photo pit seem trivial, but it also made us very uneasy about the state of music, and live events. Especially with someone as talented as Sudan Archives, a show we all enjoyed, more so knowing it would be the last for a little while.  Loadout was as smooth as when the show came in, but a little more somber, as we all worried about getting home on various forms of mass transit, late at night.

The artist and crew were staying local, only having a short ride to Philly the next day. Unsure if anything ever came from the taping of the performance, but like so many who were on the road during this time, they packed up and headed home shortly after this night.

Still having some tech work planned at the venue, I did not advise the crew on any special shut down procedure, and it was about a month before I could get back in to do any real work.

Over these next few months, I plan to talk you through not only what it takes to build a great venue production advance, and what you should be looking for, and what types of events we will see as we transition back into a new normal. This includes: what added responsibilities a Production Manager has to take on, what new safety concerns security and porters must deal with, and how we can build a stronger community for everyone when we re-emerge. 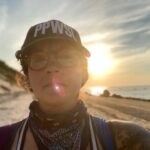 Danielle DePalma is the current Production Manager of The Bowery Ballroom in New York City and has been a touring and recording audio engineer since 2008.