The Unique and Spectacular Venues

I’ve worked in some wonderful venues some of my favorites have been found spaces or spaces that weren’t supposed to be theaters originally. They do provide their own challenges 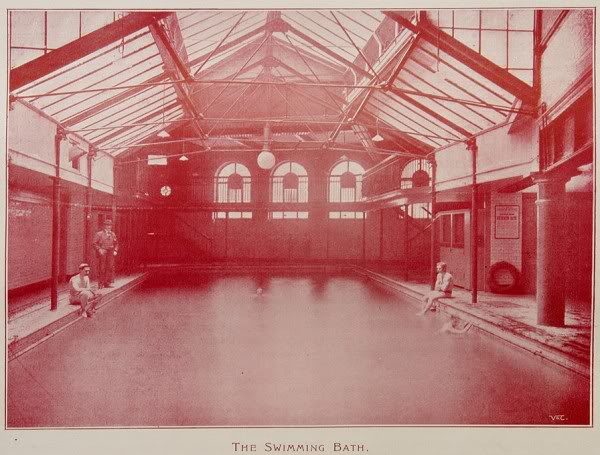 The Bridewell Theater is in an old swimming pool near Fleet Street London. It was originally a swimming pool set up for the use of clerks working on the newspapers that Fleet Street was once famous for. The press has moved on, but the Bridewell Foundation and its building is still there.  Filled with cold water from the Thames that can’t have been that clean, the pool was boarded over in winter, and the surface that was created was used for other activities. The stage floor is now on those boards, but the swimming pool below it still seems to be intact. I had a look. 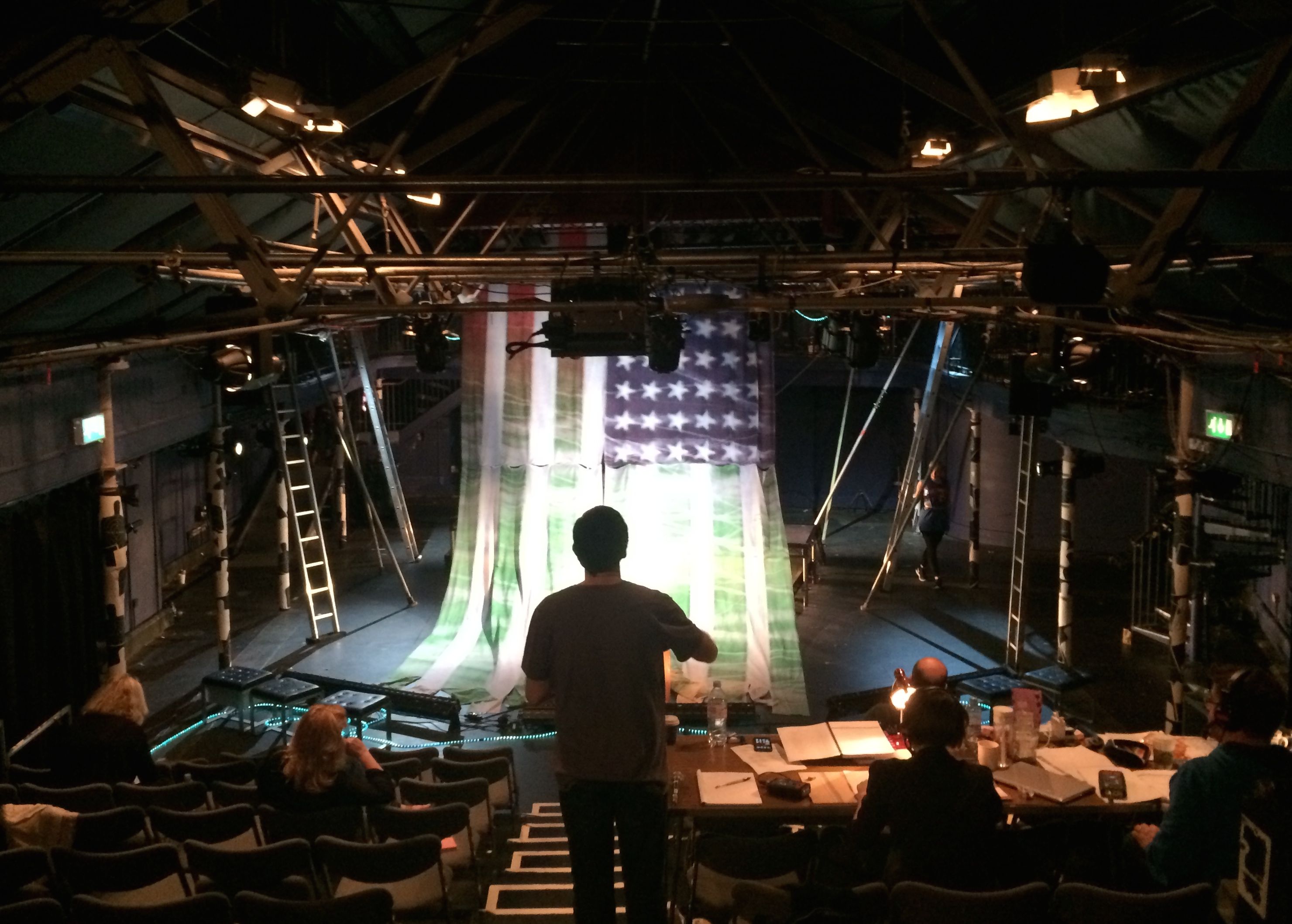 The acoustics that I associate with a swimming pool aren’t great for Musical Theatre, but they have done a great job in fixing that. The soundproofing isn’t so great, and our sound check for American Idiot, done on an unexpectedly hot spring day, upset a few people. Especially St Brides church next door. I dealt with this by a mix of some just pushing through and trying to get things done quickly and letting them know our schedule, so at least they knew it would stop at some point. The street plan is old London, possibly pre-medieval, so across the road can mean 12 ft away. I tried to be accommodating but it’s my name in the program and if it doesn’t sound good people would think I didn’t do a good job. They wouldn’t know or care that I didn’t get to do a full sound check. We did manage to get some extra drapes along the back wall so that helped a bit to dampen things. St Brides is so close to the windows you can see in the photo of the building when it was still a swimming pool.

While eqing the system, it was freaking me out a bit, how different each side of the rig was sounding. After double checking everything in the signal chain I realised that the room wasn’t symmetrical, although it didn’t look like a big difference, it made a big impact to the sound in such a small venue and the eq for each side of the rig had to be quite different. 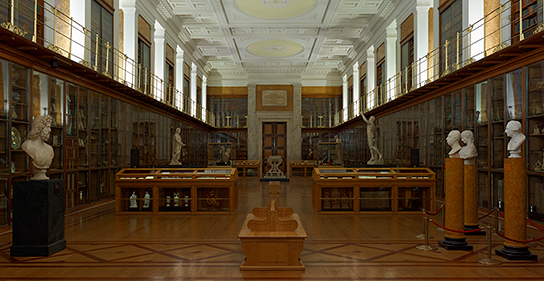 The Enlightenment Gallery at the British Museum is one of its oldest galleries. We did a play there called Smith. It’s about George Smith who would visit the gallery in his lunch hour and started translating the cuneiform script. Cuneiform is a very early system of writing.

It was a play with music, a Qlab rig for SFX playback and a keyboard and choir. There was no separate sound power we were just running from the same power as the rest of the building. So it was a bit buzzy but with isolating transformers etc. we managed to get that down to a minimum. There was also live music and a chorus. The only way to mix the chorus was to make them move further away on cue for various bits of the show. Each night everything had to be packed away and set it up again before the next show, as the museum was open to the public during the day.

There was security to get through, and we didn’t go many places unaccompanied. Despite all that it felt very special to walk around the museum after hours when it was quite and calm. Egyptian statues, Sumerian writing and a pair of ancient Chinese slippers that looked like something you could buy on the high street, all seemed more special and private at night. One or our “guards” was a specialist in medals and coins. That was almost all we could get out of him “ I just do medals and coins”.” I think he thought our world was interesting he did volunteer for “guard duty” but to him it wasn’t as interesting as medals and coins. For a brief moment, we did get to look into each other’s worlds, and it was interesting. And I now know where the secret doors in that gallery there’s a doorbell and everything. 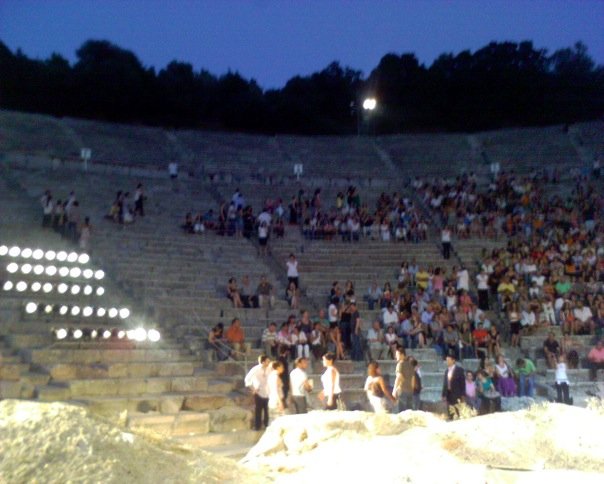 The ancient theatre at Epidaurus is truly ancient, originally built by the ancient Greeks in the 4th century BC. The Romans extended the theatre by another 21 rows to bring it to a modern capacity of 14,000. But that was nearly eight hundred years after it was first built.

I worked on two pieces there over three years, and it was a privilege to go there every time. The shows were both plays with no live music, but both had complicated sound scores. The first year I brought radio mics with me. The piece was Happy Days by Samuel Beckett with two in the cast, a woman who is buried up to her waist in a hill and a man who is only ever seen from the back and doesn’t really say much.

I was convinced I would need to use radio mics it’s a 14,000-seater venue! I had read about the fabulous acoustics, but I didn’t believe they would be robust enough to deliver to a modern day audience over a sound score. But I was wrong, the speech was clear even to the back row and this is without the back wall of the stage in place. That disappeared a long time ago. It was a privilege to work in that venue. Shows had been put on there for over two thousand years. Every drama, every lost costume, every understudy Prima Donna tantrum had happened over two thousand years ago, and everyone involved is long since gone and forgotten. It was a very humbling experience. 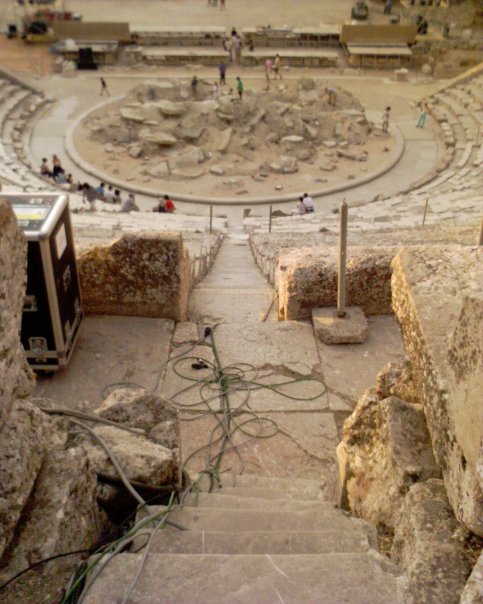 We started tech’ing when the sun went down, so it was dark enough for the lighting department. The auditorium is made of stone and warms from the heat of the day.  Walking up to the venue was hard work and uphill and getting the sound desk into position on the first tier was not easy. But many hands made light work of it.

The noise of the insects became a problem at one point, and there was nothing we could do about it. Apart from sending someone out to try and kill half of them but we didn’t do that. We worked until the light was coming back and then we would have to pack as much as we could away, the amphitheatre is a working museum during the day and it got incredibly hot. We covered everything in white sheets so it wouldn’t cook and bringing UPS for the computers meant the generators didn’t keep frying the FOH.

That venue filled is an amazing spectacle if you ever get the chance to go there, drop everything and go. 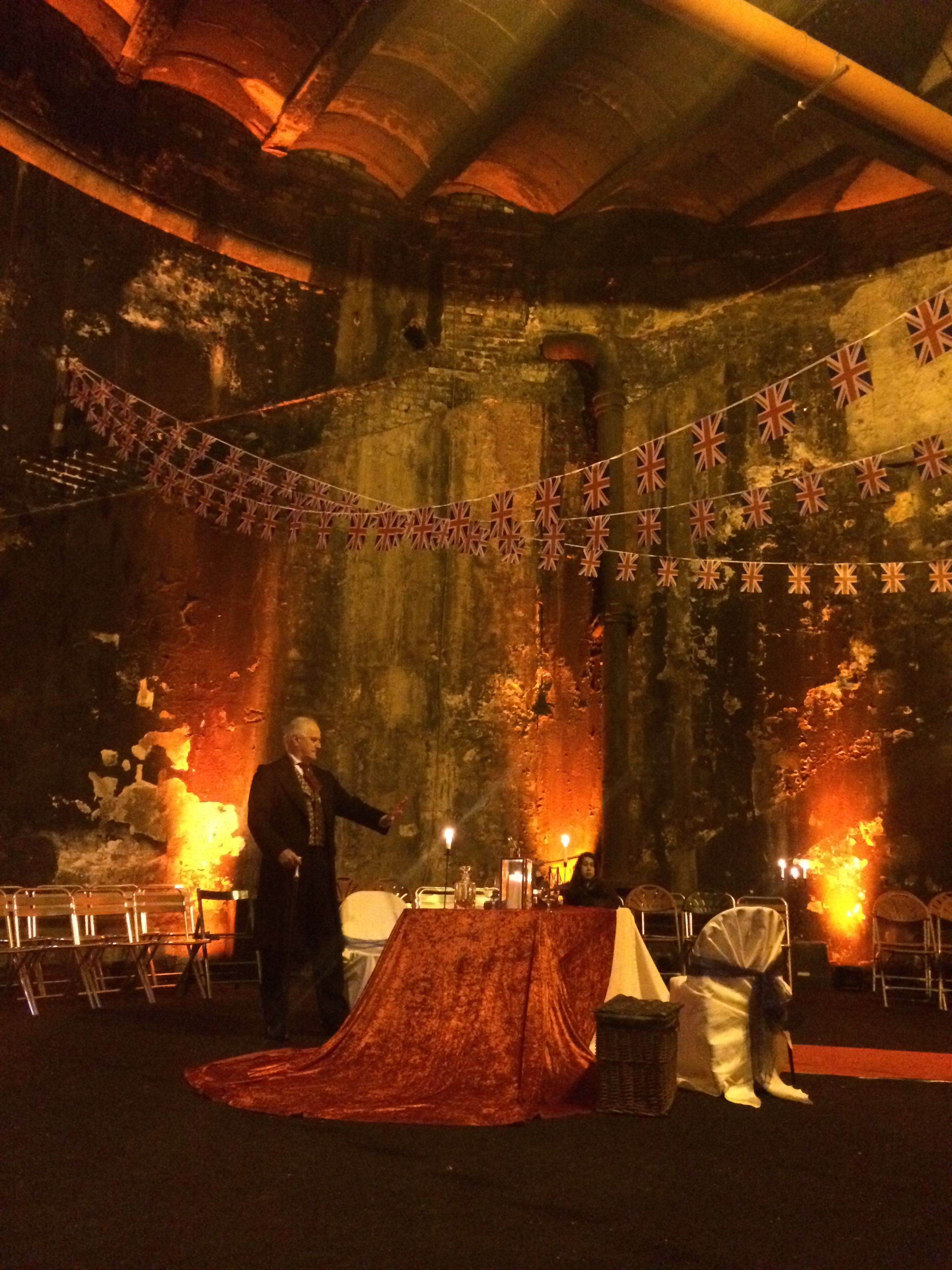 The Eighth Wonder of the World

It’s the original entrance hall to the first tunnel under a navigable river, part of the Brunel Museum at Rotherhithe. Rotherhithe is where the Mayflower set of from and we had a few pints in the Mayflower Pub

The tunnel below the shaft is used as part of the London Overground network. I know, yes it goes underground as well. The reverb in there is about a weeklong. You can hear the trains running through the tunnel all the time. The get in is through a door about four feet high; that’s at the top of a scaffold staircase and in heavy rain it can flood to six inches. That’s all the equipment and power cables off the floor then. We found that last piece of information out after we had started tech.

The play was about Isambard Kingdom Brunel and his father who designed the tunnel. They have run out of money, and they are having a fundraiser, all true and it all happened in that place. The shaft is also where people digging the tunnel lost their lives in a flood and the knowledge of that while you are down there sits heavily. I built the soundscape for the beginning of the show and the interval, and there were some SFX during the show as well.

We managed to get an amateur brass band to participate, they let me record them warming up, etc. to use as SFX. Though at the end of the show they make an entrance and play coming down the stairs. There is a section of the ceiling that is open to the sky and it helped to “ let in “ SFX I was using from above, thunder, the brass band warming up and the local church clock.

Although it says Sound Designer on my C.V. I still think of myself as a sound engineer and I jumped at the chance to do a show and learn more about one of our countries great structural engineers. Isambard approached things technically and didn’t give up even in the face of no money and people saying he wasn’t fit to do the job. I’m glad I got to learn about him.