The sound of the Elizabethan era: Sound design for Shakespeare’s Sister It’s always exciting to work on the first production of a new play. Don’t get me wrong; I’ve loved working on the re-envisioned versions of Shakespeare, Wilde, and others, but there’s something quite special about knowing your production will be the first time anyone has breathed life into this particular story.

So when I accepted the role as the sound designer for ALRA drama school’s production of Shakespeare’s Sister, and I found out that this would be the first full production, I was excited.

Shakespeare’s Sister is a play about the sister of William Shakespeare – nothing to do with the band, in case you were wondering! It follows the fictional character of Judith Shakespeare as a budding playwright when, following an unwanted marriage proposal, she follows in her brother’s footsteps and travels to London to seek a career as a playwright.

From the outset, it was clear to me that music would be an important part of establishing the period and the world of the Elizabethan theatre. In our first sound meeting, the director and I discussed the emotional context for each scene and what we wanted the music to achieve, and I outlined my views on the role of music in the play.

The director, Titania Krimpas, had already researched possible music choices as she wanted the music to be used in rehearsals from the start, particularly in the choreographed scene changes. The tracks she suggested opened up a discussion about how we wanted the music to sound – all period-appropriate pieces or modern tracks with a period feel? Live or recorded? Recordings of Renaissance music played on modern instruments, or on period instruments? 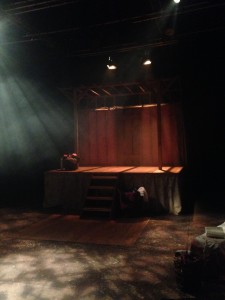 At this point, I looked at the design and lighting design, to give me an idea of their general approach and make sure I was aligning my design with theirs. The set consisted of a raised stage with stairs (quickly named the “raised platform” to avoid confusion with the stage itself) and moveable pieces of furniture and props on the ground in front of it (the “apron”), with action taking place on both levels. The raised platform acted as both the stage of the Rose Theatre in London, the setting for much of the play, and another level for scenes set in Stratford and the Tower of London. Although the design wasn’t intended to be strictly traditionally Elizabethan, it took inspiration from the world that Elizabethan actors would have inhabited: simple, almost stark, in plain neutral colours, with few embellishments except for touches of flamboyance in the costumes, as befitted key characters. 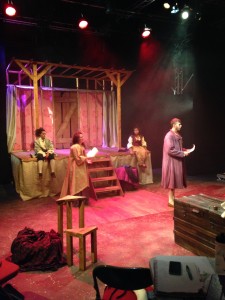 A conversation with the lighting designer, Ben Cowens, revealed his intentions to make the lighting design as naturalistic as possible, supporting the set design, and thus I had a clear direction for the music. I dismissed modern songs, and investigated recordings of period compositions on period instruments, which I felt gave a much more raw, natural sound than recordings on modern instruments.

Live music was an element that I also considered from early on in the process. I enjoy using live music elements where possible in my sound designs, as I feel they add immediacy and intimacy that is harder to capture with recorded music. In an ideal world, I would have liked to use a live ensemble, but this wasn’t possible given our budget, so instead we looked at ways of incorporating live music elements at key points. Taking our lead from the references to trumpets and drums in the script, I suggested the use of a bodhrán drum, played by one of the actors as a “player” (the Elizabethan word for an actor). A bodhrán isn’t entirely period-appropriate, but it was much easier to source than a tabor (a type of snare drum used in the period), and I knew the sound was similar enough to work with pre-recorded sounds of trumpets and other drums.

The music component of a sound design is an area where a collaborative relationship with the director is crucial. Music is a subjective discipline, and directors can have definite choices about the music they want for a production. Sometimes this feels a bit restrictive for the sound designer as it can mean they have to build their design around the music they didn’t choose. It’s useful to remember that the sound elements of a production, and music in particular, often play a significant role in the rehearsal process. In the case of Shakespeare’s Sister, the choreography of the scene transitions required music and the actor who was playing the bodhrán needed to rehearse with the pre-recorded music which he was to accompany.

As rehearsals continued, I found I was drawn to create the sonic world of the play’s version of Elizabethan London more with music than with sound effects. While I used sound effects and soundscapes to establish location – the crackling of a fire and chickens in the yard for Stratford, wind whistling through cracks and dripping water for a cell in the Tower of London – I used musical motifs and drums for moments of heightened emotion and physical tension. One of my favourite sound moments in the play was the use of a repetitive drum beat which slowly increased in volume as the scene built to a climax. Rather than keeping the drums at a level which comfortably underscored the actors’ speech, we chose to use the sound to energise the scene and encourage the actors to raise their voices above the drums. I haven’t spoken much about the speaker positions for this production because these were straightforward. Any production with a limited budget and space restrictions will require a certain amount of compromise, and I worked around fixed speaker positions and speakers that wouldn’t have been my first choice but worked fine for the production and in the space.

Two challenges that I had to overcome was where to position two speakers behind the raised platform and where to put the two subs. I had expected to attach the two speakers on a horizontal bar between wall beams, and the subs under the seating banks, but had neglected to discuss this with the designer or the lighting designer. During the get in I discovered that the designer and lighting designer had planned to install a lighting feature behind the set and the seating banks would be too low to fit subs underneath them, which slightly marred my plans! Thankfully, I was able to re-position all speakers with minimum fuss, and it was a good lesson to maintain the relationship with the creative team right through the rehearsal and production process.

Having designed a baroque opera and an Elizabethan play, it almost feels like my next design should be medieval, but instead, I’ll be concentrating on two banned plays from the 1920s. From courantes to Charlestons, no two plays are the same and my work is more interesting for it. 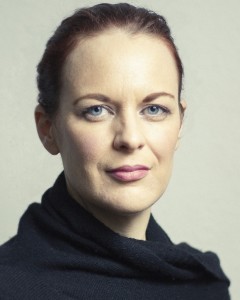