The Sound Design of Brideshead Revisited 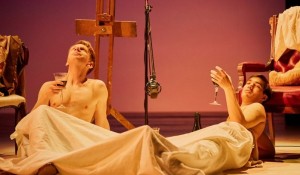 Brideshead was adapted for the stage by Bryony Lavery its based on a book written by Evelyn Waugh and first published in 1945. Brideshead Revisited is set around the life of an aristocratic family in England between World War I and World War II. The play is presented from the point of view of Charles Ryder, who is an army officer in World War II. When the play opens with Charles remembering the events around the countryseat of Brideshead. It his memory of events that the play centers around.

Here are some things we worked into the sound design. 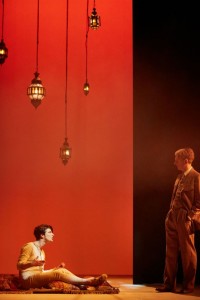 Memory is a major theme of the play; in design meetings we discussed how memories are triggered and what happens in your mind at the time. There was a discussion of the language of memory portrayal in film, which often utilizes reverb and the sense that memories sometimes seem to approach from a distance. I knew that would mean playing with a sound heavy with reverb and then getting closer and dryer and landing a moment before the action on stage took up the dialogue or sound in real time.

A lot of the creative team had memories from childhood that were attached to certain sounds and birds seemed to dominate this. I grew up in the East End of London, and I have memories of lying in bed in the early morning listening to seagulls. (The sound of London birds is the sound of seagulls for me. I know they don’t often make it into the collective agreement of how London sounds, but if you are within a mile of the river then there are seagulls) So I knew birds would feature in the sound design. Memory in relation to sound, often revovles around phrases that we play to ourselves over and over in our heads. Doubling of dialogue was also something I thought we could work into the
sound design.

We wanted the process of story telling to be visible to the audience; the cast handles the scene changes on stage, setting up and changing the props. They also set microphones on stage and perform some on stage Foley.

Alcohol is a big part of the first section of the play, and we worked on amplifying the sound of wine being poured to emphasize that point. 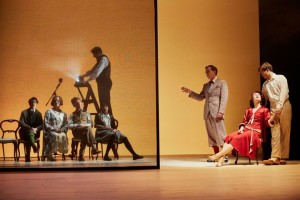 We decided to amplify the sound of a projector vs. working to silence it and cover it with a sound effect.

We used radio mics, but not every cast member received a dedicated mic. Ryder, who did a lot of the narrating/ remembering of the play, wore a radio mic. His mic was used to change the tone of his narration and to put him in a different space for those bits of the play rather than for amplification. I was using it in a different way than when I would use a radio mic for `musical theatre. If you can imagine BBC radio drama announcer, that’s the kind of sound I was going for.

Some of the play took place in Venice in an old house. As this was a static talking head moment of the play, I used one of the two 414s on a stand to pick up the voices and send it to some gentle short reverb to help give the sense of being in a big stone house.

Scene changes were marked with music and soundscapes were woven together. The composer (Chris Madin) and I worked closely together to get the tone of these transitions right and to carve out or give room to the dialogue that surrounded the transitions.

The plot of Brideshead takes us to Oxford, London, to a country house in Venice, Manhattan and aboard a ship. The moments on board ship were potentially challenging; there was a lot of dialogue in this scene as well as a big storm, and I had to make sure the storm sound effects allowed enough room for the dialogue as well.

There was a division in the way sound effects were reproduced compared to the music in the show. The SFX tended to come from onstage SFX speakers, and the FOH system was primarily reserved for music playback.

The pre-playback was a selection of pre-recorded excerpts of dialogue from the cast. They had been asked to mull over lines of dialogue that they thought were particularly representative of their character. I used these lines in the pre-show to create a repeating slowly building round of whispered memories. The pre-show builds and builds and culminates in a sudden cutoff that leaves Ryder in Brideshead at the end of World War II. 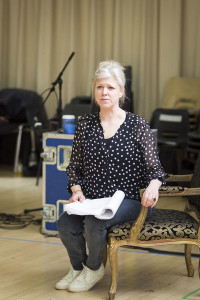 I was fortunate to work with the company during rehearsals. We were able to discover things about the play in a much more cohesive way than if I had just joined the production for technical rehearsals. It was great to be able to play sound and music in the rehearsal room. It helped the cast to build a relationship with the soundscape and for us to integrate the use of microphones into the play. There were a few moments in the play of whispered conversations that the rest of the characters in the play weren’t supposed to hear. They obviously needed to be heard by the audience, these were mostly spoken into a couple of 414’s and routed to FOH.

One of the best discussions I had in my early days as a sound designer was with a vocal coach. We use to discuss listening to the whole play rather than just the elements of the sound design. I found this useful for this production where the amplified and un-amplified voices had to be woven together and although they needed to highlight different moments in the play they all also needed to sound like they were part of the same world. 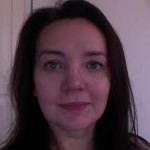 Yvonne Gilbert has a background in theatre and mixing musicals. Yvonne is a Sound Designer for musicals and plays and a FOH for Musicals and Concerts. Yvonne shares her current projects and tips and techniques she’s found useful.