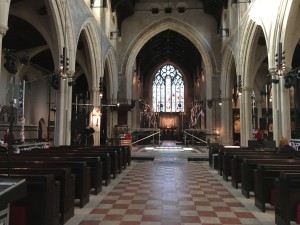 The Nativity is one of three plays adapted by Tony Harrison. The plays are a version of the medieval English Mystery Plays. The play is set in the north of England and uses a northern English dialect. As the play was being performed in London and not in the North, I thought intelligibility might be an issue.

Here is a link to an earlier version of the play performed at the National Theatre you can hear the dialect used. An added complication for intelligibility was the venue. A church, you can hear the acoustics here in the welcome to the church from Fr Paul. The performance space was also in the round, in front of the altar, in the aisles and more importantly for sound often in front of the speakers.

As you can see, we had some challenges to overcome. We visited the church before rehearsals to get an idea of how voices would carry without amplification and assess if the band area would be suitable. It was an actor/musician show meaning the entire cast played instruments and there would not a separate band. The musical director (MD) came with us so he could hear the space before he started the arrangements. The music was arranged with mainly acoustic instruments, though they would be amplified and there was also an electric guitar and bass.

I chose Meyer UPJ’s as the speakers, knowing I could achieve a tight coverage pattern if I needed it and would help with limiting the natural reverb of the space. We utilized six UPJ s, subs and a few SFX speakers as well. I set up multiple groups for the vocal system one that went to front left and right, one that went to the side left and front left and one that went to side right and front right. This allowed us to facilitate the cast moving around the space and create vocal zones. Jenn Goodheart-Smithe, the operator, faded between vocal groups that corresponded with the zones as the cast moved around. It worked quite well as long as the cast didn’t stand directly in front of a speaker when they were delivering dialogue.

I pre-recorded the voice of God announcing to Mary the virgin birth so that the angel could mouth the words and we would hear the voice of God. It was played through a small speaker hidden very close to the actor to give the illusion of God speaking through the angel.

The play starts with the book of Genesis, before the world was complete and everyone that spoke had a reverb to emphasize their other-worldliness. There was also a sound effects bed to help with the setting of that space.

Death is a character in the play, and I gave her a bit of a pitch shift on her mic. Obviously, you could still hear her acoustic voice, but there was an underscore of something a lot deeper as well. 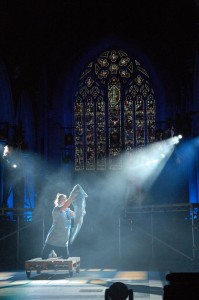 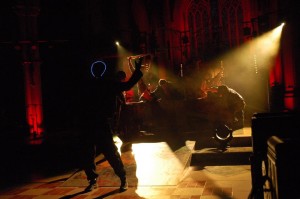 The band line up was mostly mic’d acoustic instruments. There was a large brass section, strings, organ, reeds, woodwind and an electric bass and guitar. We decided to divide the musical numbers into two parts; one would numbers performed in the band area and numbers performed in a surround mode. On the gentler moments, it worked well to have the acoustic instruments in amongst the audience, giving an immersive feel to the show. It also allowed us to control the natural acoustics of the church.

Actor-musician shows can be a challenge there is little parallel rehearsing, the band can rehearse in one room and the overall rehearsal time is effectively less. Often, the band is large and some instruments will be played for only half of one song there can be a lot of double use of microphones. This can be trickier to be accurate with the mix but Jenn our operator did a good job with that. 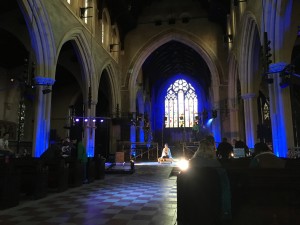 This was a working church, so that meant every evening we had to be out of the building for two hours so that they could perform evening mass. We also had to be out of view entirely for the Sunday service. We took everything down and had to rebuild it for the Monday evening show. That took a huge chunk out of our rehearsal time. It meant we had to label and photograph everything. I chose a digital snake and a Rio rather than a copper multicore and stage box as this would make for a quicker setup. The speakers were powered, so no amps and the radio receivers were by the sound desk, so hopefully there would be minimal unplugging for the turnaround.

Remember a successful show run is in the details and the preparation that starts well before rehearsals.