Continuing from my last blog post, here is some more about the vocal reinforcement techniques I have learnt in relation to radio mics. Read Part 1 Here 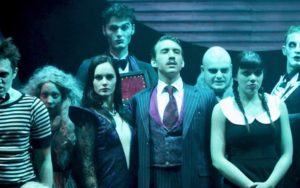 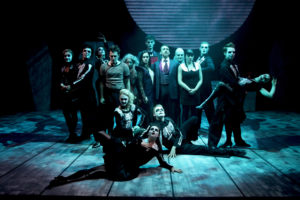 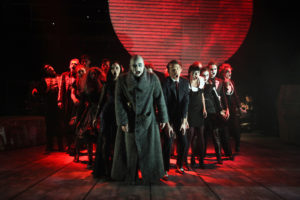 This is a photo of a production of the Addams Family musical. This was the same setup, in principle, as Rent. The band is at the back of the stage – there is not much separation between the stage and the band. The mics are in the hairline; you can see the odd mic poking out but they are pretty well hidden. So, what is going on here? Why does this mic position work for the Addams Family musical and not for Rent?

It’s the score. The Addams Family is much more traditional in terms of musical theatre: the line-up of instruments is more traditional and there is room in the score for the vocals. The overall level of the show is quieter and that means we can get away the mics in a more discrete position.

Let’s look at the difference between the mic positions within the show, considering everything else is the same. 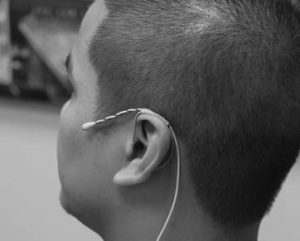 In this photo, you can see Uncle Fester. Uncle Fester has no hair so the hairline isn’t an option at all. What can we do for uncle Fester? Uncle Fester needs an ear hanger.

You can’t see the ear hanger in this picture – I couldn’t find a shot of him from the correct angle. The ear hanger is quite long –  you would probably make it shorter and paint it to match the skin or hair tone.

Sometimes the hairline can’t be used because you have a hat situation that isn’t going to resolve itself in the way you’d hoped. So, what are the problems with this?

If you have to go for an ear hanger, it’s generally a step down in audio quality from the hairline position. Although they are omni-directional mics, there is a muddy quality to the audio when you put the mic over the ear. They are probably far more visible but they will keep a constant distance from the mouth. They can be liable to sweat-out, and if the actor is laying down, or head to head in profile with someone, then that can cause noise problems. But it can be a good solution if you can’t get the mic in the hairline.

It is common to use an HF boost cap on an ear hanger to try to help with the difference in EQ that it will need. 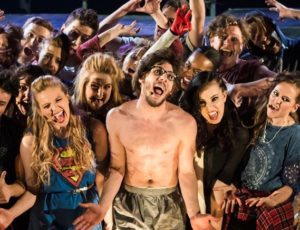 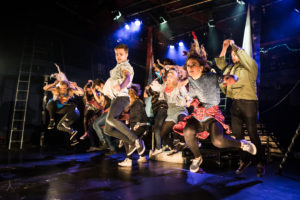 I did a production of American Idiot at the Bridewell Theatre. You can see they are all on boom mics here. American Idiot was a loud show and we had a great band who were up on a balcony at the back. Everyone in the cast was on a boom mic. It gave us the level we needed to get the vocals over the band and to have that great impact at the start of the show.

What are the downsides of boom mics? Well, they get in the way. Obviously, the actors lying on the floor is an even bigger problem here because there is more of the mic to crush. Any scenes where the actors have to kiss can be awkward. The mics move and, depending on where they are anchored, they may move relative to the mouth of the actor. They have to be anchored and fitted really well to not move about. Heavy breathing can be a problem and there is a very distinctive look to them. But they are worth it. So long as they are fitted properly, they will give you lots of level.

This is the least useful mic position for live sound. In theatre, it can bring all sorts of issues.

It is so difficult to make chest mics work as the actor can turn their head away from the mic – that will generate an inconsistent level. There can be loads of clothing noise and they really get in the way of costume changes.

Mic-ing every line of dialogue can you give you the opportunity to impose SFX on top of certain actors’ voices, so you’re not just restricted to amplification. 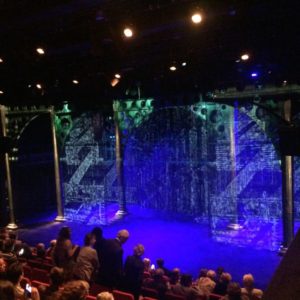 I was the sound designer for a production of Ghost.  One of the main characters in the show, Sam, is dead. He dies during the show and refuses to go away. He is not the only Ghost in the production.

The problem was one of how to make Sam otherworldly. There were some physical magic tricks to make that happen, but we wanted to give him that sudden transition into a ghost. We couldn’t do it visually – we couldn’t make him transparent, or black and white, or any of the other standard visual tricks used to represent a ghost – so I decided that whenever someone died they would have their own reverb. All their personal dialogue after they died would have its own reverb.

When they launched into song, the difference between the speaking effect reverb and the reverb needed for a number created a bit of a conflict, but subtle mixing fixed that.

I played with a similar thing on a version of the Nativity that I designed.

The play starts with the Book of Genesis, so before the world existed there was God and the angels and they all had a vocal reverb when they spoke as well.

The same actor that played God also played Death. I wanted to create something for Death that was different from the human characters in the play, but also something different than the reverb effect we had used for God and the angels. We used a pitch shift and, although you could still hear her acoustic voice, there was an undercurrent of something more menacing and subtle that gave enough of a difference to her voice to make an impact.

I’ve covered some of the things I have learned about radio mics here, but it’s a constant art of just doing what works and not being afraid to change the way things are done if they aren’t working the way you need them to for the job in hand.

Recap
In the last two posts I have covered five different types of mic-ing:

In the hairline: Looks good and sounds good, if you aren’t doing a very loud show. Minimal interference with the actor, unless they do a lot of forehead acting. Hair products and sweat can be a problem.

On the forehead: Still sounds great, but isn’t as discrete and is more prone to forehead acting.

Over the ear: Can sound muffled and needs some EQ work. It can get in the way if the actor is laying on their side. Sweat can be a problem. picks up costume noise, and doesn’t sound great.

Boom mic: Great for level, but can really get in the way physically.   Heavy breathing can be a problem. They are not at all discreet. 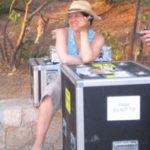 About Yvonne: Autograph Sound gave me my first theatre job as a sound No3 on Grease at the Dominion theatre. Over ten years and having mixed many musicals later I decided to get a “real job” and became a Sound Manager at the Royal National Theatre in London. I got the sound design bug while working there and was lucky enough to design in-house shows while working there. I realised that was the direction I wanted to take my career in and Autograph again were kind enough to take me on as an associate for a few shows. Since then I have been the Sound Designer for musicals and plays in my own right. I also mix FOH for Musicals and Concerts.