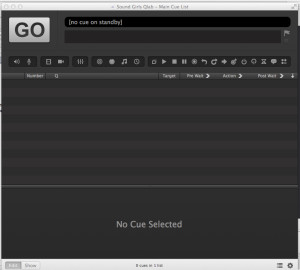 QLab is my software of choice for play back in musicals and plays. QLab is a Mac-based piece of software that I have found it to be robust, flexible, and quick to program. If you need a playback engine for music tracks or sound effects and you have a Mac, then it’s absolutely worth looking at.

When you first open up QLab, you will see an untitled workspace (Fig. 1). In order to optimize things while you are programming, it’s wise to set a few preferences. These can be changed later, but I’ll share the way I set things up. At the bottom right-hand side of the workspace is the icon of a cogwheel. Click that and you get to play with the settings behind the screen. (Fig 2) 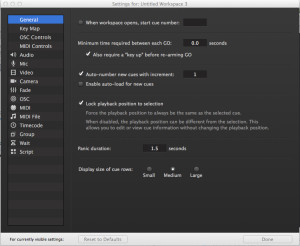 If you click on the audio menu on the left-hand side, it will take you to the section where you can set the output device, label the outputs and set the levels for any new sound cues. I set new cues to be silent with all the cross points in so that I can fade them up to set level rather than fade them down. Then I select the group menu and select the “Start all children simultaneously” option. Clicking “Done” will flip the screen back to the workspace.

Getting audio in is as simple as drag and drop. When you drop something in, a new set of tabs appear at the bottom of the workspace in the inspector. (Fig 3) The tabs I use the most are Device & Levels, Time & Loops, and Audio Effects. As this particular sound effect is something that will run continuously under a scene, I’m going to want to loop it. I’ll need to select the outputs it’s going through and I also may want to add some EQ. That’s all available there in the software. 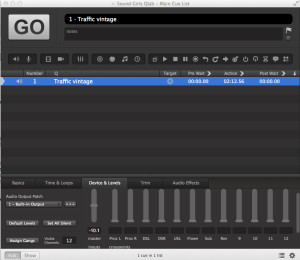 Playing just traffic on its own could get a bit monotonous, so I want to add a few car horns, but I don’t want to trigger them all individually. In order to do this, I need to create a group cue.  By clicking on the square outline on the top menu bar (or select it from the cues menu) a box will appear in the workspace. As I’ve chosen all children at once, it will be a green one.  Drag in the audio files you want to include in this cue.  They can now be treated together.

If I were to trigger this cue as it is, then both wavs would start playing at the same time and the traffic that I had looped would play forever. That’s not what I want to happen. To fix this, I’ll put a pre-wait in on the car horn so it starts a bit later. At some point, I’m going to want the traffic to fade out, so I will need a fade cue. I can drag the faders icon onto the workspace and assign the cue I want to effect by drag and drop.  The fade length can be changed, as can the fade curve. (Fig 4) 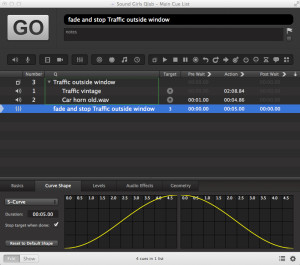 At the moment, you only have a cue-list and not really a show file, so you need to bundle the workspace.  This will collect all the audio files you have dropped on to the workspace, make a copy of them and place them together in a folder with the workspace.  When you do this, you can transfer the whole folder to anywhere you want and take your show with you. Fig 5 is an example of what happens when you don’t bundle a workspace. The red crosses show that QLab can no longer find the audio files.

Fig. 5 shows the preshow of a show I recently designed. The show was set at the end of World War II and you can see there are lots of loops triggering. In the pre-wait column, you can see the delay time I put in for each of the audio files to trigger. They then looped at various lengths until the next cue, which stopped the preshow and the SFX that started the show were triggered. 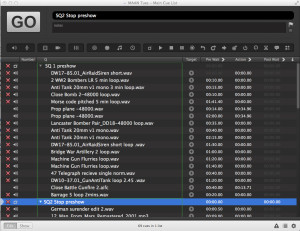 QLab is made by figure 53. You can download a free version of it here: http://figure53.com/qlab/ The free version gives you two channels and doesn’t give you anything under the audio effects tab. You can still use it to create a show and then rent the software by the day from figure 53. Or, if you can make do with only two outputs, you can use it to run a show.

With this information, you can create a basic cue-list and get a show together. As you dig deeper, you will find you can vamp and de-vamp cues, trigger or be triggered by midi and much more. QLab can also be used for video.  The complexity of your cue list is up to you, and everyone will use it in a way that suits how they create a show. 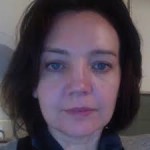