In Part 1 of this 2-part blog, I introduced my challenge of creating a modern sound design to fit a baroque opera staged in a 19th-century music hall, including my initial approach to the space and decisions about amplification. This part will cover creating the soundscape for the pre-show and prologue, speaker positions and the issue of levels. 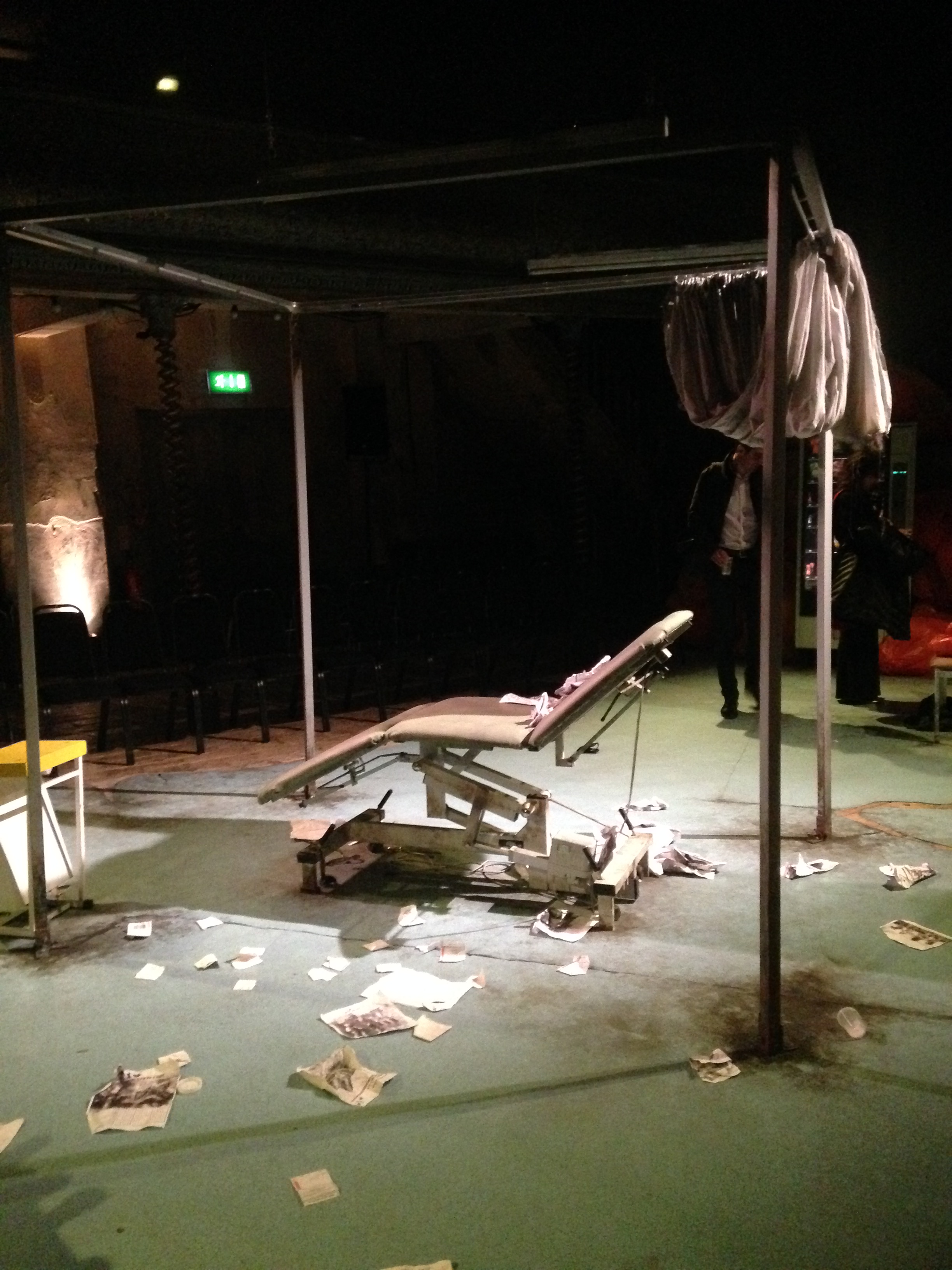 The bulk of my design centered around the opening of the show. My brief was to create an ambient hospital soundscape which built to a climax as the singers entered, changing to a gentler version of the same soundscape which played under the first unaccompanied madrigal. The soundscape then crossfaded into a pre-recorded prologue of the Health Minister addressing modern-day parliament, with raucous “hear hears” merging into the opening chords of the opera.

Using layers of sound to create space and immersion
Using the beautifully squalid set and stark lighting as inspiration, I built the pre-show soundscape around layers of ominous drones, electric hums and affected hospital sounds of ventilators, surgery and heartbeats. The world of the opera was virtually extended to suggest the hospital outside of the physical space, footsteps echoed in distant corridors, lightbulbs flickered and snatched pre-recorded bars of madrigals were heard briefly from individual speakers, cut off by door slams.

Gauging levels for pre-show ambience is tricky. Too high and it becomes intimidating (unless that’s the effect you want), too low and it risks being drowned out by the audience chatter. I don’t feel I ever got the levels quite right, but the intimidating atmosphere of the hazy lighting state and “aggressively unlovely design” helped. Having a show that looked and sounded like an apocalyptic asylum overrun by zombies did, at least, keep the sound of the pre-show audience down to a subdued murmur. 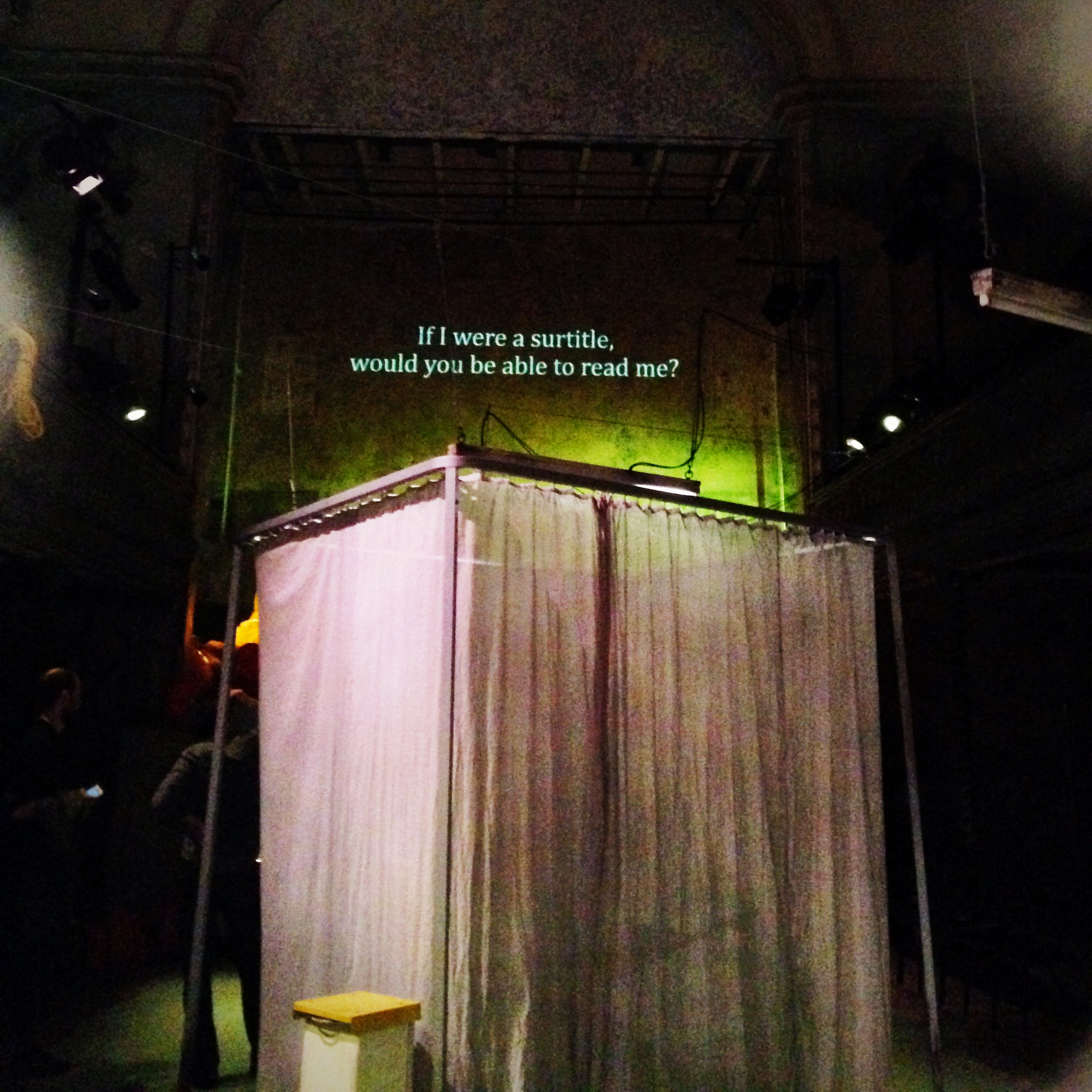 Knowing that the heavy drones of the pre-show soundscape would muddy the purity of the first unaccompanied madrigal, I stripped back the layers to leave the gentle sound of dripping water and a very low-level electrical hum to continue the suggestion of a run-down institutional space. We solved the problem of how the first singer pitched the initial note by putting a pitched tone into the speaker nearest his entrance point. At the right level, amongst the other interwoven drones and sounds, another note was imperceptible to the audience and audible enough for the singer to pitch his first note.

An immersive soundscape deserves an immersive physical design, or as immersive a design as I could create given the budget. I arranged the seven speakers I had at my disposal accordingly. I placed four surrounds in the stalls (two RCF speakers fed from a Yamaha P7000S amp plus two active Yamaha MSR400 speakers). Two speakers covered the balcony (Eurolive E1220 400 Watt speakers fed from a Yamaha P3500S amp) and there was one sub (RCF S8018). My final speaker (another Yamaha MSR400) positioned behind a working vending machine to provide a steady vending machine-type hum. 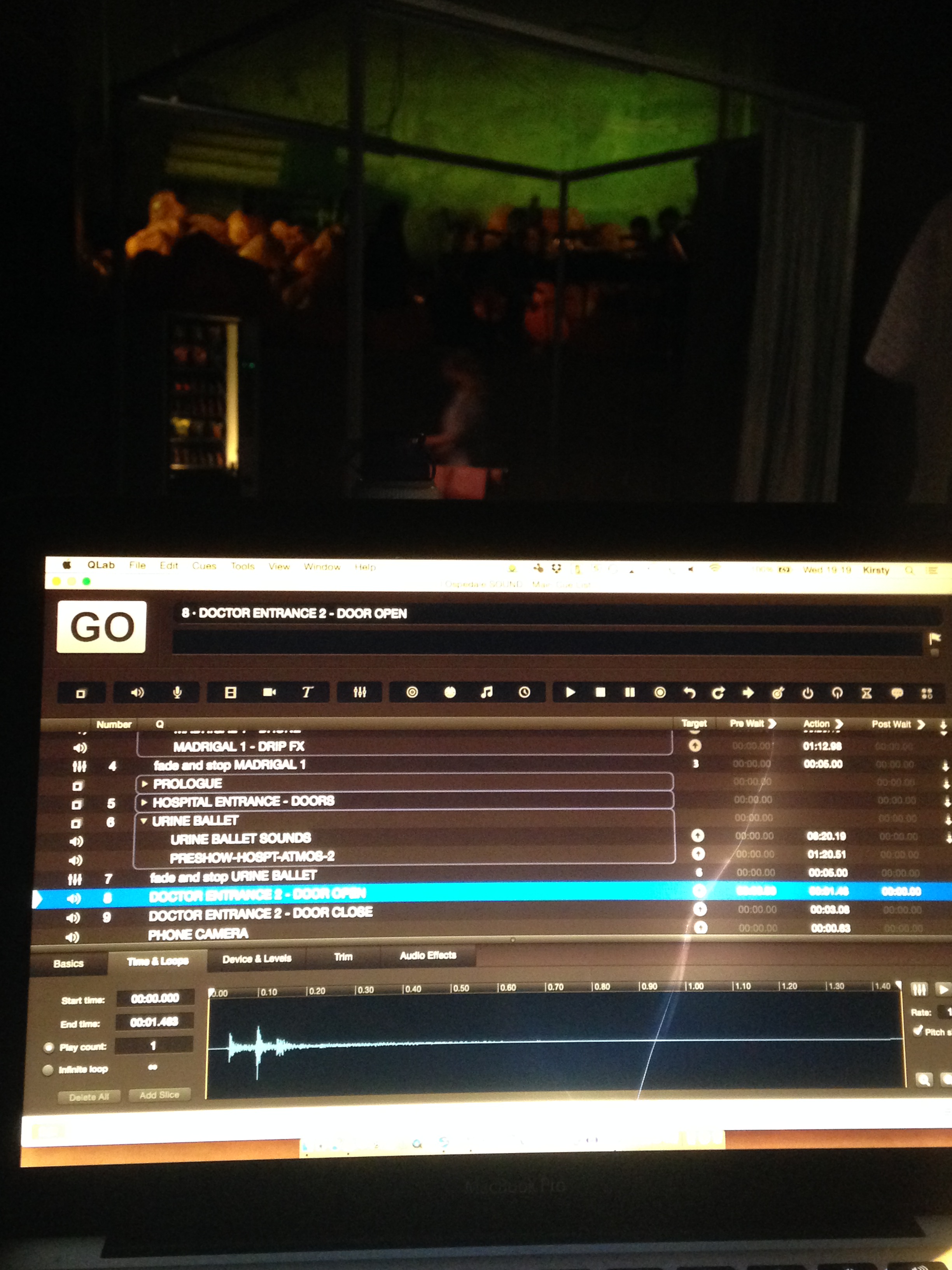 Like many historical venues run by an independent charity, Wilton’s relies on donated equipment and like many independently-funded productions, the budget for sound was limited. Aside from a new audio interface, I worked with what the venue could supply. The desk was a Yamaha O2R (remember those?) which I hadn’t used since the early 2000s and never outside of a studio, but at the end the day, signal flow is signal flow and it was nothing a few cables and logical patching couldn’t fix.

Levels and the challenge of multiple rehearsals

At the first set of tech and dress rehearsals (read on for why there was more than one set), I met my first challenge: to make my layered sound design work sonically with the baroque music. Levels that I had set painstakingly in the Stage & Piano tech were suddenly overbearing in the Stage & Piano dress rehearsal. And while I altered them, I had to bear in mind that we were setting the levels to work with one harpsichord and the six singers – but this was not the full ensemble. Would they work when we had two harpsichords and another four musicians, plus the singers? 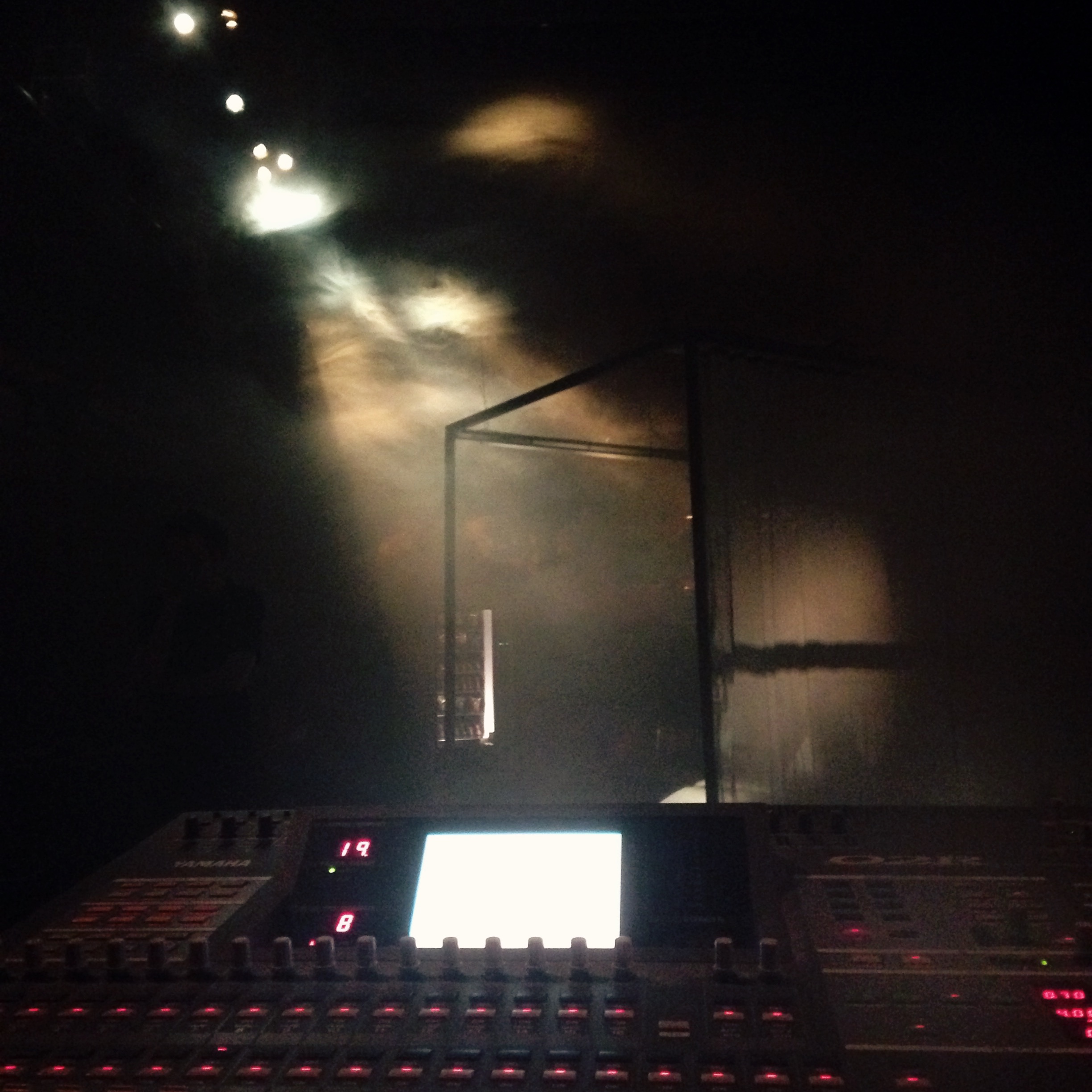 I had to apply any changes to levels that I noted in the Stage & Piano dress rehearsal on the fly during the Stage & Orchestra sessions, often without hearing the result. I was most concerned about how this would affect the Prologue and Epilogue, which were pre-recorded speeches (in English) set to the sounds of a contemporary British parliament (House of Commons) sitting. Both the Prologue and Epilogue speeches and the accompanying parliamentary sound effects were instrumental in establishing the context of the opera and aligning themes of the 17th Century libretto with the current political climate (and thus the modern setting). They had to be heard clearly above the music, without drowning it out. As I was urged by some of the production team to make the jeers louder, I had to consider carefully the impact on the music and consider which was more important for the audience to hear.

By this time, some of my levels on QLab had crept lower and lower and issues with gain structure became apparent. Having set the levels on the O2R too high, I now had a noticeable amount of hiss coming through the four surround speakers. Back I went to adjust levels painstakingly on the desk and accordingly, all the levels in QLab. By the start of the Stage & Orchestra dress rehearsal, I was taking my best guess, trusting to my work so far and reminding myself that I could always fix things in previews. 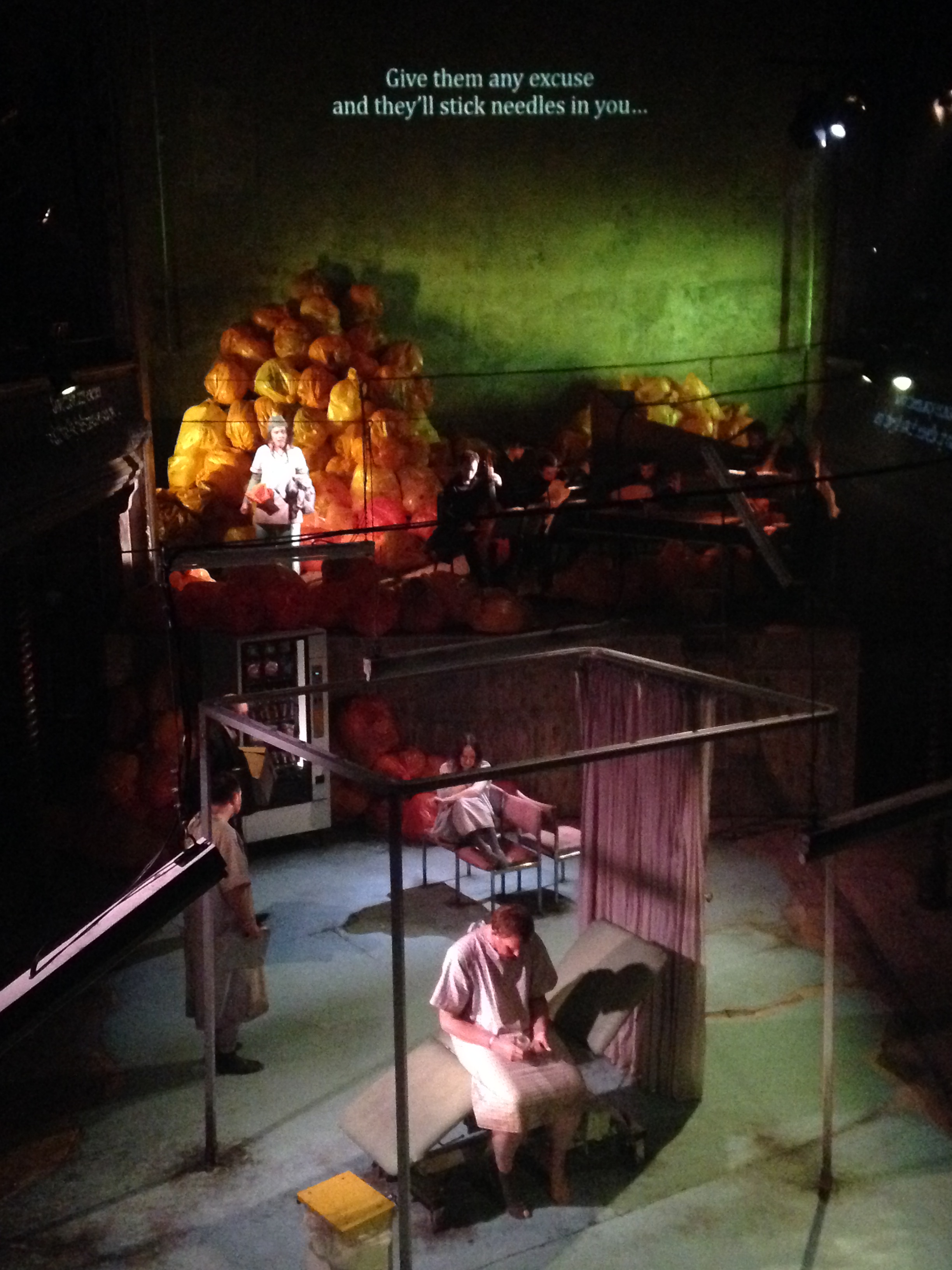 I felt I spent most of my time on l’Ospedale filling in spaces with sound, then paring back until it was just present enough to give a scene weight or context. I imagine with the kind of opera that involves grandeur or significant visual or aural impact, the sound design might have a more central role. In this case, considering the subtlety of the music, allowing the sound design to shine through would have reduced the impact of the performance. It was enough for me that the modern soundscape I added to a baroque opera fitted so naturally, as to be unnoticeable.