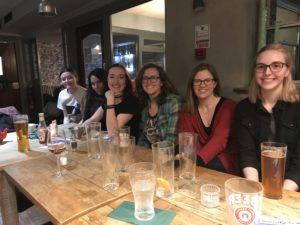 One of the most rewarding aspects of being involved with SoundGirls is hearing about (and learning from) the experiences of other members. At the most recent meetup for London and UK members back in January, I met members at all different stages in their careers, working across everything from theatre sound to podcasting. From members who had just graduated and were deciding which career path to follow, to members like Jackie Ord, who has recently started to work as an engineer and producer after decades working as a musician.

It was through Jackie talking about her experiences as a young woman interested in sound and music in the 70s and 80s that I found out about Ova Music Studio, and the fascinating story of the women who wanted to empower other women and girls to create and produce their music.

Rosemary Schonfeld and Jana Rumells established The Ova Music Studio in Highgate, north London in 1984, after had forming the radical feminist band Ova in 1976. As well as providing facilities to record and produce their music, the stud offered workshops for women on sound recording, voice, drumming and percussion. Ova wanted to control their music production and recording outside of the commercial music industry, and the institutionalised misogyny that surrounded it and help other women to do the same.

Rosemary met and fell in love with, Jana in 1976. Both singer-songwriters, they started playing and writing music together, living in various squats and playing at lesbian and feminist nights across London. After their romantic relationship ended, they continued to create and perform music together as the Ova, first as a group, then as a duo. They released their first full-length album Ova in 1979 on the label Stroppy Cow, which was set up by fellow feminist group Jam Today.

The Women’s Liberation Music Archive (WLMA) describes the aim of Stroppy Cow as “to encourage women to make their kind of music in their own time and space without the counterproductive pressures of commercialism. The music industry often restricts creativity by pre-determining images and roles that women have to conform to be heard. The policy of Stroppy Cow Records is to encourage women to define their own musical output and to be involved in every stage of production.”

As Rosemary says in this interview with WLMA from 2010, this policy encompassed everything from to women owning the rights to their music to the position of how women’s voices in the mix. As she says “in the commercial music industry women’s voices were often being mixed right back, [it was] male choices for the final sound and production.”

Rosemary and Jana were introduced to recording technology by sound engineer Mike Trim during the recording of their first EP (released on cassette). Their new skills gave them the confidence to be able to hire recording studios and work with, as Rosemary puts it in the WLMA interview, “sympathetic sound engineer[s]…you had to find the ones that were helpful and encouraging…willing to share their knowledge”. 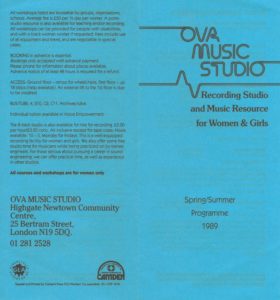 In 1983 they received a grant from the Greater London Council to establish their studio – Ova Music Studio –  as a resource for women to record demos and learn about sound recording. One of the conditions of the grant was that they had to offer workshops, and so they did outreach work, travelling to schools with a 4-track recorder, as well as holding music and sound workshops at the community centre in Highgate, north London, where Ova Music Studio was based. They had a resident female sound engineer, Livvy Elliott, who also toured with Ova and taught the sound recording workshops.

Rosemary eventually left the studio in the late 1980s and moved away from London to study music. Livvy went on to establish Studio 9 in Brixton. Ova Music Studio continued for a while, eventually becoming Overtones Studio. It appears to have closed sometime after 2007.

The full interview with Rosemary is available here and you can read more about Ova and listen to recordings in their Women’s Liberation Music Archive entry here (scroll down to find their listing).

The interview is well worth a listen – it’s a fascinating journey through feminist music-making from the mid-1970s – early 1980s, taking in the London squatting scene, touring, the lesbian and feminist movements in the US, UK and Germany, intersectionality, musical influences and working in music and music production as a woman.

Thirty years ago, these original “SoundGirls” were facing many of the same challenges as women working in sound and music production face today. It’s an interesting and sobering thought to consider SoundGirls as part of the same history – a lineage of (in Rosemary’s words) “agents of social change.”