My Catharsis: Never Give Up On Your Passion 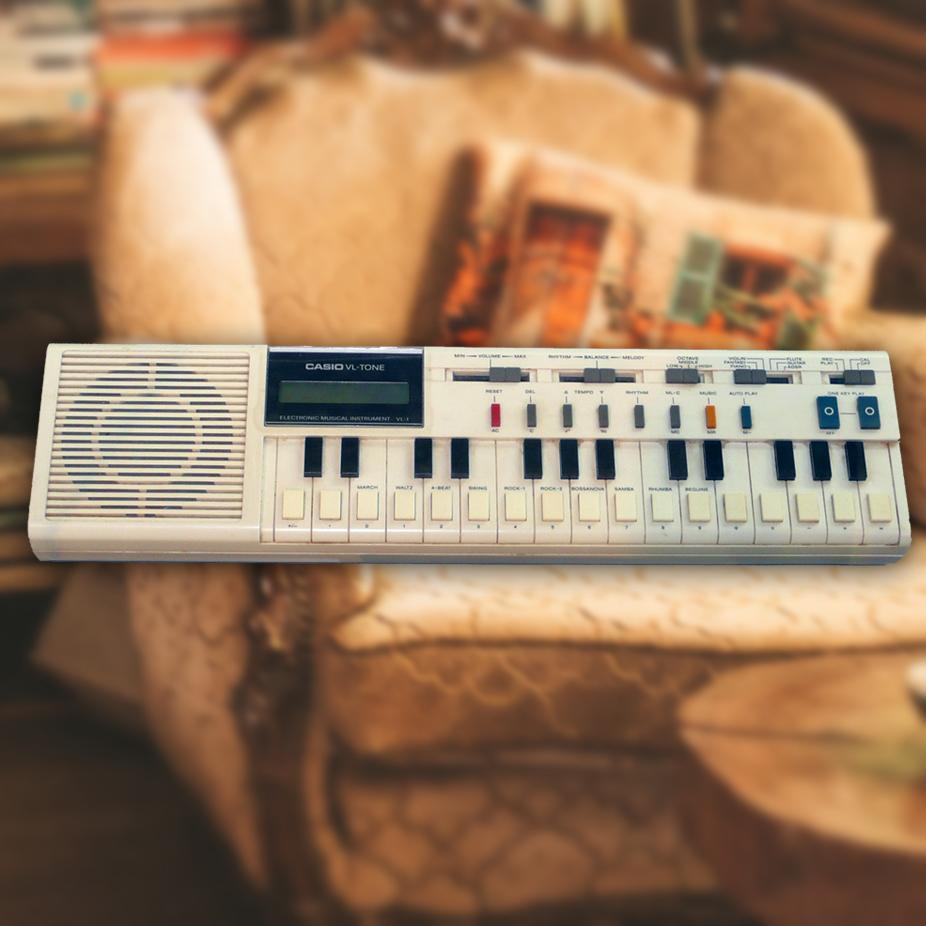 From a very early age, music was everything to me, I remember sitting on this sofa in the corner of the living room, I was around 4 or 5 years old. I had just put my favorite Richard Clayderman vinyl (yes, it’s true!). On my hands, I had this little ‘piano toy’ borrowed from my big sister that I could play all the tunes by ear. They call this ability absolute pitch (AP) since during my childhood I used to play and repeat all the notes by hearing only. I had no idea of music theory at all and in my mind, it was something normal to repeat flawlessly the notes. Years later I found that this piano toy was, in fact, the first commercial digital synthesizer called Casio VL-Tone VL-1, used in several hit songs around the world like “Da Da Da” from Trio. It’s been almost three decades, and I remember these moments like they were yesterday.

I could keep improving my piano skills but being born in a familiar environment where music is seen only as a hobby is one of the worst things for a kid with musical talent. Generally, you don’t want to disappoint your parents whom you love, so when your family wants you to study something that gives you “financial stability” you try to follow “their dreams” or you are at least influenced by it. I know many people that break free, but at the same time, many people are caged in this nightmare, like I was.

Trying to please my family I left music (as a profession) aside almost my whole life. Being a schoolteacher was a profession well seen in my family, so I followed this study path at the University. But I could at least choose the specialization in music to be able to teach music in schools. To be honest I wanted to be a musician or work with music but not be a teacher in a school. After finishing University, I had my diploma, sounds great, right? No, unfortunately, I encountered another issue because in Spain it was very difficult to work in a private school with only a specialty in music, so I needed to continue to do more specialties in other areas just to be able to work. Also, English was a requirement to get more job offers so I needed to learn a second language as quickly as possible, I had a plan.

Destiny – Music is always around us

The plan was to go to Ireland to improve my English. Deep down I never strayed from what I was most passionate about. During an English class, a colleague mentioned that he was playing in a small music band, and they were open to musicians and in need of a first flute. I couldn’t believe it! Coincidence? For my spare time in Dublin, I got music with me, I mean… my flute. Did I say that I play the flute? Ok, backing in time during my early childhood I wanted to learn piano in a school, but familiar financial issues kept me away, so I ended up learning by myself. But years later when I was around 12 years old, I could learn the transverse flute to play in the music band of my small town in Spain. There I had a concert to be the first flute. It was supposed to be my very first debut, but it was a fiasco for me.

Back in Dublin, I’m a grown woman with a childhood trauma in live music performance. I had my second chance to participate in a music band again as a first flute. Destiny? I was facing a never healed wound. Just 15 years before in the music band of my small town, the conductor gave me the opportunity to play my first solo in a live presentation, I studied it day and night relentlessly for this moment, but just on the day of the concert, I trembled and the air just did not come out, the notes did not sound right and the conductor made me a sign to shut up and pointed my partner to overtake my performance, I was devasted. I was a failure – I thought. In Ireland, I was about 27 years old and feeling more confident, and also the trust given by the conductor gave me the braveness to play splendidly as the first flute again in a concert in Dublin. It was my catharsis; I had finally crossed the barrier of everything that was holding me back.

After my studies in Ireland, I returned to Spain to look for a job as a teacher. In the meantime, I started playing flute in a jazz-blues band in my small town. It was an opportunity to improvise on the fly, it was my first experience in jam sessions. I loved it, ‘oh my’… it was magical! Then I found a job in Madrid to work as a childhood teacher of English and music.

Even working with music as a teacher, I was not happy. I needed desperately a new motivation for my soul caged in a job that I was not motivated for. Then I bought this little guitar-like instrument, famous in Hawaii and based on the Portuguese cavaquinho called the ukulele.  It was my salvation. By chance, I discovered a new world, and I made friends in the Ukulele Club in Madrid, we were like a family. Along with playing with the ukulele I was also singing and that became another passion, I really enjoyed playing with my voice. To help others to learn I started creating tutorials in Spanish on Youtube in my spare time. I called the channel “Lydia Ukelele”. I remember receiving some criticisms from people close to me undermining my tutorials for being so “easy”. Indeed, that was my purpose to not be a barrier for anyone. I’m proud that organically the channel got almost half a million views in total just by doing good. There I received tons of good vibes and positive comments from grateful people. 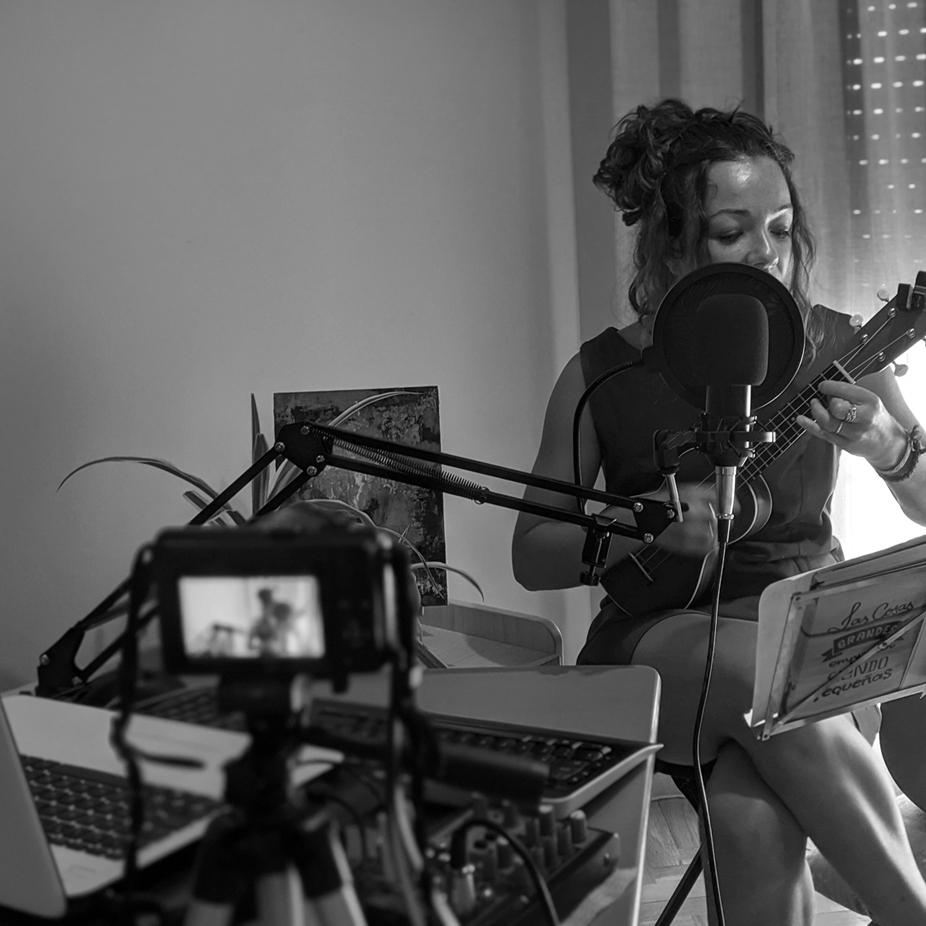 The truth is I always wanted to work with music. I wanted to compose, produce my own music, to write my own melodies and lyrics. With the support of my fiancé, I decided to leave teaching for good and dedicate myself entirely to music composition and music production. Music production? I accepted the challenge. Music production was by no means easy as I needed to sail through seas totally unknown to me. I deep dove into looking for knowledge through courses, books, and websites like ‘SoundGirls’. I’m still learning but for the first time ever, at 36 years old, I feel I am on the right path, for me it is a dream coming true the possibility to live and work with my passion: music. Since this change, I’ve been composing original songs and scoring for short movies.

Finally, I would like to say to all of you who think that music is your passion, please don’t base your path on the opinion of others. You are free to choose whatever you like to do. Do not let anything or anyone stop you, always follow your dreams no matter what your family, your teachers, or even your friends tell you, only listen to your heart.

“Miracle” was my first instrumental song composition released last year on SoundCloud. The title is not by chance, it has a lot of meaning to me. It’s my miracle.

Recently I also released an instrumental composition titled “Never Surrender” then remember: never give up what you love the most! Keep inspired. Keep going. 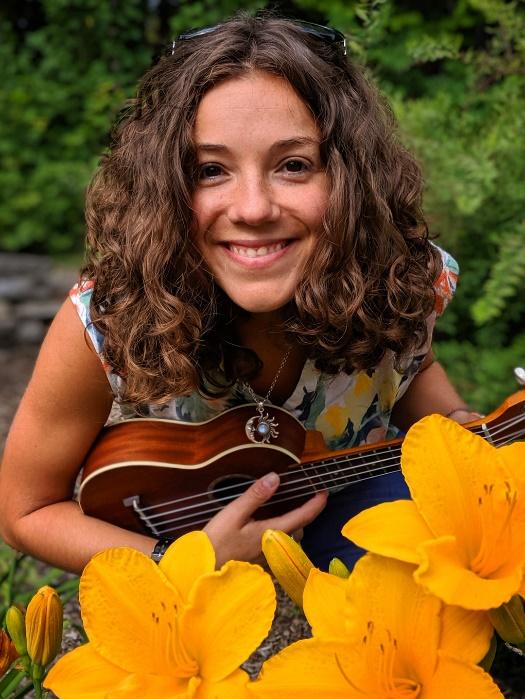 Lydia Guía is a musician since early childhood that decided to follow her passion for music composition and music production. Currently, she produces her songs and also scores for films. She sings and plays piano, transverse flute, and ukulele. As a musician, she has also performed live in Spain, Ireland, and Canada in music bands, small orchestras, and shows. You can find more about her work on her project MagicalBeatz.com

Read Lydia Guía's Blog
Follow Lydia Guía on
Browse All SoundGirls Contributors
X
We use cookies on our website to give you the most relevant experience by remembering your preferences and repeat visits. By clicking “Accept All”, you consent to the use of ALL the cookies. However, you may visit "Cookie Settings" to provide a controlled consent.
Cookie SettingsAccept All
Manage consent