Musings on the Role of Femininity in the Music Industry 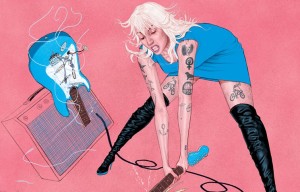 Historically speaking, women, and those that are female-identifying, have largely been unwelcome in the music business. Unless you were an overstated, hyper-exaggerated version of a sexual, feminine ideal in a front person role, you had no place, no business being near a stage, studio, or mixing board.

The concept of the feminine identity in relation to the music industry is one that perplexes and fascinates me. Now I don’t necessarily mean simply dressing in a “girly” way – most, if not all, of us are unable to wear a skirt when working (it’s not practical in the slightest, not to mention a possible safety hazard in live situations. I prefer my trusty blue jeans.) – but more the attitude, the feeling of being “feminine,” whatever that means, and how it translates to our work.

I interviewed a few of my colleagues regarding their thoughts on this topic, asking the question, “have you ever felt like you’d have to reject your femininity in order to be successful in the industry?” Most that I asked this question to initially responded with a hard, “no.” Jill Meniketti, band manager for Y & T stated, “That’s not something I’ve ever focused on.  I focus on my work, which I take seriously.  When you excel at your job, that garners respect, regardless of gender.”

Delving in a little deeper into the feminine mentality/attitude aspect garners a slightly different response. When I first got started in the studio, my college professor insisted that being a woman in the studio was a massive advantage, because they are better at keeping the peace and stepping into the role of the band’s creative therapist. My friend Eva Reistad, a studio engineer based in Los Angeles, echoes this thought. When I asked if there was a time when being feminine proved advantageous, she stated, “yes there was: band members sometimes are more open to the fact that you’re a woman, in which case they’ll sort of open up and tell you more things, which will cause the session to go better. I don’t think it’s really anything so much as femininity so much as being female.” Somehow, just being a woman allows people to feel more secure and comfortable in that situation.

Through all my discussions on this topic, the main conclusion I come to encompasses more than just femininity. It’s about being comfortable with who you are. As Eva puts it, in the end, what I think is how you present your aura, your energy, that will determine how you are treated. You cannot control how other people react. Be comfortable with yourself entirely.”

There is a power in being a woman in the music industry. Being confident and secure in who you are provides a sturdy foundation for the rest of your work, whether you are a tech or an artist.

Willa Snow: Willa is a freelance studio sound engineer and producer, currently based in the Austin, TX. She loves working with artists in the studio to carve out their sound and clarifying their stories. She will be blogging about her past and current experiences in the studio, and sharing her journey as she pursues her career goals.

About Willa: Willa earned her degree in Contemporary Music from Santa Fe University of Art and Design, with a focus on Music Production. Though her career is still a fledgling one, she has already gathered several professional credits to her name as a ProTools operator, sound engineer, and backing vocalist, and has been the leading producer on various projects. Outside of the music studio world, she has dabbled a bit in radio production while working as a narrative editor for a small radio show in New Mexico, and has helped to establish a student-run record label at her alma mater. For fun, she enjoys studying Bulgarian vocal music and African hand percussion, cooking, and dancing.