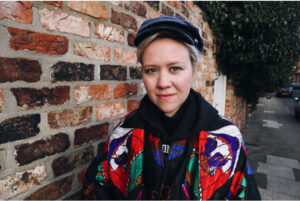 Liina Turtonen is an independent music producer and educator. She also runs YouTube channel LNA Does Audio Stuff. She also co-owns an organization called Equalize Music Production, where they teach Ableton Live and production for women.

Liina got interested in audio seven years ago while traveling around Europe. She ended up in Glasgow where she says it changed her life “ at that point I wanted to be an actress but got sucked into the electronic music world and music production through my new Glaswegian friends. At that time I worked in a club and every night after work, when I couldn’t sleep, I started to make funny songs for my friends back in Finland with GarageBand and a £1 microphone from Poundland.”

She grew up around music, most of her family are musicians and she went to a music orientated school, as well as conservatoire since she was five playing violin and piano. She says during her teen years she says “ I started to hate all music as I never felt it was my way to express myself (although I have always written my own songs and never stopped). But finding this new way of making music in Glasgow gave me freedom from classical music and allowed me to play sound in my own terms. I got in to study Commercial Music in Ayr, where I was introduced to proper music studios and after that, I never looked back. I still live in the UK, did my masters in production and now work as a professional music producer.”

Liina plays violin, piano, and guitar, and also sings and writes her own songs. Her debut album, which she produced and everyone involved were women, was published in 2017 and since then she has released two singles and an EP. New EP should be coming out in 2020. She works under her artist name LNA.

Liina started her YouTube Channel LNA Does Audio Stuff in February of 2019. The channel has given her visibility where people can view her portfolio and see who she is. Liina says in the beginning “ it worked mostly as a portfolio when I was searching for work, but after a while, people started contacting me for production, teaching, and workshops because they saw my channel or someone shared it with them. The job opportunities I managed to gain were all in many different areas: festival workshops, panel discussions, sound design for a dance company, etc. I feel that I am still in early career but the network of people I have gained in past years is growing and giving me faith in the future.”

LNA Does Audio Stuff now has over two thousand subscribers and features tutorials, reviews, vlogs, and fun audio challenges. The channel also aims to give a platform to minorities in the audio industry and show diversity on social media, to inspire more girls and young women into technical industries. SoundGirls recommends checking out LNA Does Audio Stuff.

We talked Liina about her career path so far.

I really don’t have a typical day as my work changes so much each day. I make myself a list of things I need to do in that week or day and work through that. Only things I have a strict schedule for Youtube videos (I post every single Sunday) and teaching. Most days I might have meetings in the morning and then I film, plan, edit or produce/mix the rest of the day. Yoga is part of my day as well because sitting by a computer all day would otherwise kill my back.

I like making lists and time schedules/ deadlines for myself. If something is on the list I need to do it. Also deciding to post every Sunday was really good for me as it gives me a goal that I need to obey and even if I don’t feel like filming, as soon as I start doing it I feel much happier and proud of myself.

What do you enjoy most about your job?

I enjoy the freedom of doing what I want and the feeling of accomplishment when I hit the targets. The best thing is to get messages and feedback from people and especially girls and women, who have seen my videos and have started music production because of it. That is why I do it, and those messages encourage me to work harder and make more content.

Editing. It is so painful to go through hours of film of you trying to articulate something to the camera. After the rough edit, the editing becomes more fun when I can put down effects and all funny clips that can make the video entertaining.

I love planning and filming my videos. Usually, I plan my video first step by step. Then I get ready (yoga, shower, make up) and go to my studio to film. Mostly I film alone, but sometimes I have guests in the studio. At first, I was really tense in front of the camera but doing this over a year, every single week, it started to get easier and I really have fun now doing the clips.

I would love to grow my channel and make more interactive content to support women in music and get more girls and women into production. I have a documentary coming out this year (done together with Music Production for Women), where we follow the journey of a female singer-songwriter to learn to produce her owns songs. This is the content I want to concentrate more on, but also make more fun and inspirational films about music production. Other dreams include producing a song for a Drag Queen and owning my own women-led studio.

I would say my own confidence is the biggest barrier sometimes. I don’t like the moments when I feel that nothing is working and I am doubting the whole Youtube idea. I am so glad to have a partner to encourage me in those moments of doubt. In the beginning, I thought all the sexist and nasty comments under my videos would be a barrier for me, but now I think they are just ridiculously funny, and to be honest, I think they encourage me to make more and more content. Also, with more comments under a video, the better algorithm Youtube gives the video, so surely I should thank them for helping me to get more visibility.

Keep on working. I give myself the time to rest and be sad sometimes, but the next day I start working again. Also giving myself deadlines make me work harder and realising that feeling like a failure sometimes is ok, as it makes me work harder, and then success feels much nicer.

Every idea is a good idea. You might not succeed with all the ideas, but if you don’t try you won’t know. Don’t sit and wait for the opportunities to come to you, but create your own opportunities. Then when someone gives you an opportunity, you will be ready to show what you got. Also, don’t ask for validation from people (especially your family) if you believe in your idea/dream then go and do it. As you are in charge of your own success. These are the things I have learned recently and when I started applying these ideas to my life, things actually started to happen in my career.

It’s a bit cheesy, but I think the best skill is to believe in your own skills. But if talking about audio, then I would say: become a master in using the audio manipulation features in your DAW, so that you could make a whole song just by using one sample. This skill will take you far.

Absolutely Ableton Push 2. On my channel, I have so many videos on it and when you watch then you will know why it is my favourite. It’s just so powerful and great for everything.

Anything else you want to add or contribute

To showcase how many amazing women and gender minority people there are running audio YouTube channels, I have created a list of all the ones I know and I’ll update it when I discover new ones: https://lnamusic.com/2020/04/15/female-audio-youtubers-you-need-to-follow/

Please let me know if you know anyone who was not on the list!

You are not a unicorn: The transferable skills you already have
Beginner Speaker Design