Making Mistakes – Learn and Move On

You are going to make mistakes, you just are, there is no one who hasn’t made a mistake. One of my favorite things about the West End is our pragmatic approach to a life long career. Common phases in use are “ We’ll all be laughing about it in a years time” “I’ll dine out on this for years” and “I’ve screwed up bigger shows than this one”.

Of course messing up something that doesn’t get fixed before it makes it into the show is not a habit to cultivate.  But dwelling on the mistake you just made is not going to keep you focused in the moment and moving the show along. The skill to master first is how to keep going under pressure. Reshma Saujani is the founder of Girls of Code. Says “we’re raising our girls to be perfect and we’re raising our boys to be brave” She has a great TED talk.

Reshma  talks about her experiences teaching girls to code.

“We immediately see in our program our girls’ fear of not getting it right, of not being perfect. Every Girls Who Code teacher tells me the same story. During the first week, when the girls are learning how to code, a student will call her over and she’ll say, “I don’t know what code to write.” The teacher will look at her screen, and she’ll see a blank text editor. If she didn’t know any better, she’d think that her student spent the past 20 minutes just staring at the screen. But if she presses undo a few times, she’ll see that her student wrote code and then deleted it. She tried, she came close, but she didn’t get it exactly right. Instead of showing the progress that she made, she’d rather show nothing at all. Perfection or bust.”

So what do you do when things get really bad I recently had an experience where I spec’d a Rio ( Yamaha digital stage box) with an old Yamaha desk. The show is in rep, I had to use that desk as it is owned by the theatre company, and I wanted to avoid a copper multi core in order to make the turn around as easy as I could. I am use to Rio and newer Yamaha desks working together. The M7CL took a bit more persuading than I’m use to with the newer desks. So I downloaded all the manuals and spent some time working it out. I posted in a few forums in case that would be a quicker route to a solution.   Could I have researched more that there might be an issue ? Is this the gig that is finally going to expose me as a fraud” – OR  – Had to use an old desk, spec’d a Rio with it. Made it work I am awesome.

There is a famous Les Mis Story.  Les Miserable’s is a long running musical in the West End. It opened in 1885 and is still going. The Head of Sound was mixing and had been at the desk for the sound check. The SFX were played from a CD player that was also used for the sound check. On that day the sound check CD had been left in and instead of a carthorse SFX there was a Goriliz track. Obviously this is considered a huge error and as the show was being archived that night. (there is an audio recording of the whole thing).  That Head of Sound has moved on to other shows and is still one of the most sought after mixers in the Westend. He has a copy of the audio of that nights show and will play it for you if asked. Was he mortified? Absolutely! Will that ever happen on a show he’s operating again, I doubt it.  It has neither defined nor ended his career and your bad gig isn’t going to define yours either.

So how do you get through the gig itself? It’s easy to slip into “deer in the headlights” mode when things are going wrong. It’s a flight or fight response and it’s a perfectly natural state of being but it is not helpful in this situation. So take a breath, assess what is really going on and make a plan. Start with what you know is working, it can seem like nothing is going well but it’s rare that nothing at all is, start with those certainties and build from there. 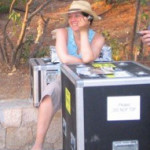