Losing your Footing as a Freelancer and Getting it Back 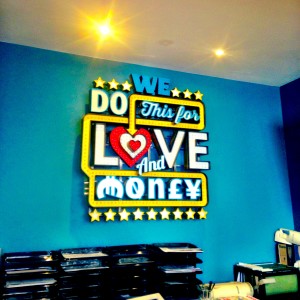 Three years ago, something happened to me that could happen to any freelancer: I woke up one morning to an email from a production company terminating my freelance employment with them. In one click I lost a gig that brought in over half my monthly income at the time. Cue significant worry and mild panic!

The company who employed me assured me that it was nothing to do with the quality of my work, there was suddenly just not enough work to go around. I had been hired as a freelancer when the company was experiencing growth, but as that growth had unexpectedly slowed down to a trickle, my services were surplus to requirements.

It’s hardly an uncommon story in today’s economic climate, especially in the arts. Venues close every week, events stall due to lack of funds; production companies decide it will be cheaper to do certain jobs in-house instead of hiring freelancers. Losing income, especially from a regular gig, can send even the most level-headed freelancer or small business owner into a slump. However, throwing a pity-party isn’t going to make the situation easier to manage. As hard as it feels, in my experience what will get you through the tough times is a plan of action. Three years on, I’ve had many more uncertain periods of employment, and each time I’ve been better equipped to bounce back.

We all know moaning about our lot on social media makes us look unprofessional, but it’s so much harder to resist doing it when it seems life has dumped us in it. Resist, resist, resist! Get someone to hide all internet-capable devices if necessary. You can get the sympathy you deserve from your significant other, friends or family. Unless you’re part of a high-powered family firm, you can afford to sound desperate, whiny and disheartened to your nearest and dearest  – but you definitely can’t afford social media-savvy potential employers see you that way.

Accept the situation and turn it to your advantage

It sucks, but constantly wondering “why me?” isn’t going to change it. It’s happened, now it’s time to move onwards and upwards. If your contract ended for any reason other than your incompetence, a thank you email is a great way to show your appreciation for the company and your employer. You can also use it as an opportunity offer your services for future work and to ask your employer to recommend you to other clients.

If you haven’t had a clear answer why your services are no longer required, draft a polite email to your employer and ask them. Take the time to consider all the feedback you receive, positive and negative. It’s a great learning tool and can highlight areas for improvement that you haven’t considered.

Think about what you could have done that might have changed your current situation. Could a written contract have helped avoid this situation? Should you have been clearer about your hours of work, availability, turnaround times, etc.? Something I learned was not to be so quick to consider this job as “regular” income after only a few months. I’ve since taken steps to be better prepared for similar situations by establishing multiple revenue sources, rather than trusting it would come from the same source month after month.

How did you get that work in the first place? You must have done something right to get your foot in the door, and it may be worth repeating the same steps.

Go back to your application or cover letter and highlight what you think may have made you stand out to that employer. Revisit the CV, demo or portfolio sample you sent them – did you tailor it to them or was it more a sample of your strongest work? Re-read any correspondence you had with them before, during, after the job – is there anything about your application, work or business practices that they single out? If you got the job through personal recommendations, consider why your contact would have recommended you – or better yet, ask them!

If the work you lost was a large ongoing project or regular work, chances are you’ll have some holes in your schedule. Sure, a portion of that time will be taken up with finding work to replace the work you’ve lost, but you might well find you still have a bit of spare time.

Take the opportunity to work on those projects you’ve put to one side while you concentrated on “real work”. If you’ve put in the time and effort into your business, the work will return, but until then, why not use the time productively and tick off some of those tasks you’ve been saving for a slow period? Updating accounts, revamping your website, polishing and learning new skills, catching up with colleagues, making sure your portfolio is up to date, getting out and experiencing inspirational gigs and shows, all of these can get lost and forgotten in the process of day-to-day money-making. Now’s your chance to catch up.

I remember that in the weeks following losing my major gig three years ago, I became very thankful for the extra time it gave me. I reassessed my priorities, make progress on projects, caught up on articles that I’d been meaning to read, and you know, had a break.

Losing work can be scary, but it doesn’t have to be the end of the world. In fact, it may even increase your chances of being employed in the long run.

Kirsty Gillmore is sound designer, engineer and voice artist. Originally from New Zealand, Kirsty has been based in London, UK since 2002. Her 15 year career has seen her work in music production, post production, live sound and broadcasting, including eight years training with and working for the British Broadcasting Corporation. She established her own sound design & voice production business, Sounds Wilde, in 2010 and now works as a freelance sound designer for theatre and film, as a voice reel producer and voice artist.