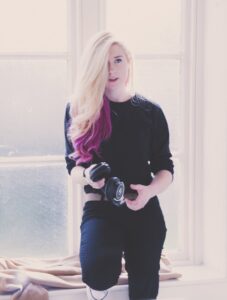 Lauren Deakin Davies has worked for six years as an independent record producer and engineer. She recently worked for SoundLab Studios for a few months before starting work as a production assistant to Gary Barlow in London.  She got her start working alongside her mom Helen Meissner who was so impressed with her recordings that she set up Folkstock Records in 2013 when Lauren was 17. She was the sole producer on over fifty releases of independent folk and alternative acoustic acts, five of which gained coveted Sunday Times album reviews and the label has gone on to achieve almost 30 spot plays on BBC Radio 2 and the same on 6 Music. She also owns a studio ‘The Den’, with sponsorship from Digigrid and Audio Technica which she has been busy building, growing her equipment and client list.

Lauren dropped out of school at age 17 and did not have formal training in audio. She is a self-taught engineer and producer, watching tutorials and asking people who she knew — learning by trial and error. Lauren says she “learnt more about the technical engineering side of things when I was involved with outside projects, and this led to getting invited to a session at other studios with amazing equipment. I was always the annoying one asking what the engineer was doing. In retrospect, I can imagine that I was a nightmare to have in the studio.”

Lauren does have an extensive background in music, being in bands at a young age, and with the support of her parents, she was able to develop and grow as a musician. At age 15, her (second) band was spotted while out busking by Martin Lumsden who runs and is now producer, at the Cream Room studio. He gave the band his card, and Lauren says her mum was like ‘oh yes, well I’ll have a chat with this guy, and we’ll see…’ It turned out he was genuine, and we have a lot of contact with him – he gave me my first official role in a studio on a project he was working on.  We worked with a few different studios over the four years that band was together, and I think seeing how music was created completely inspired me to want to do production as well as songwriting/performance.” 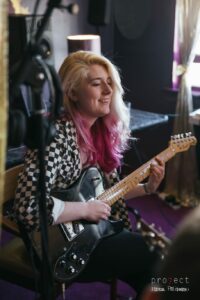 Lauren would take over the party den (shed!) at the bottom of her garden with terrible equipment,  but says “that’s what gave me the grounding in music production, learning the hard way, sorting out ‘work rounds’ and ultimately realising that I liked it. It took me a few years and lots of encouragement to realize that I wasn’t awful at it! I think that because I was self-taught (and to be honest I am learning all the time) I was worried that there were massive gaps and one day I would fall flat on my face – classic imposter syndrome. I’ve since realized that nearly everyone has this every day! And it’s a necessary by-product of not playing it safe, of pushing yourself out of your comfort zone and trying new things. If you only do what you’ve always done, you’re never going to grow. Some challenges end up being easier than expected; some are unusually hard. But I’ve learnt to live with the uncertainty and just get on with it. If I don’t know something, I ask around and find someone who does, and the internet is excellent for practically everything, from tutorials to tips.”

One of the more challenging projects Lauren worked on was when she was 20 and said it was “ a real learning experience. Because of the networking and industry events, I go to, I was kindly asked to produce/engineer a session for an all-female project with Laura Marling, and I recognized that I was way too far out of my depth, even though I was flattered to be asked. So instead of chickening out or making a fool of myself, I brought my friend Rhiannon Mair to help me, and it went so well. I learnt so much in that session and was able to apply the skills and knowledge I learnt daily.” 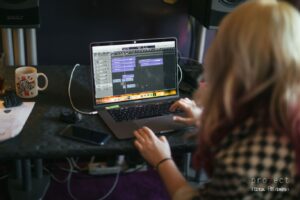 Another project Lauren found challenging was a recording project was an all-vocal  ‘a capella’ album for Kate Dimbleby. Lauren explains the nature of the project meant there were “no backing tracks to guide the vocals, and with the multitude of vocal layering that each track involved, I had to be so immersed to mix every track and get everything, the harmonies, counter melodies in exactly the right place. I had never worked on anything so complex! If you listen to her album Songbirds (released on Folkstock Records), you’ll see what I mean! It did go down well though, with national papers raving about it including Sunday Times album of the week and national BBC radio play, so it was well worth it! Most recently, I found myself challenged when I took on a week-long songwriting residency, as the producer, which was extremely daunting to me. We had to produce a track each day, which had been written that day! Intense! I’ve always liked to push myself. YOLO seems to be my catchphrase!”

Probably the multi-tracking and the cacophony of sound that is created when the layers are added upon each other. Also, the completely different direction that one track can be pushed in depending on the type of production style that you add to it. I am always in awe of the pure joy that you share with the artist when you know you’ve created something that you both love!

When clients don’t know when to stop, it’s challenging to learn when to draw the line and accept the track is finished, because everyone (I’m pretty sure) always thinks they can do better, and sometimes that feeling takes over!

I like outdoor activities like climbing and ‘rough camping’ or just generally making things. I’m not necessarily the most skilled woodworker in the land, but I do love carpentry, tech, and creating and making different things. Whether it’s a ukulele or some element for a guitar or a new pedalboard or sewing backdrops, I’ll be absorbed.

Be the best record producer ever… Ahah!

I think no matter what walk of life you come from, you are going to face some forms of discrimination. I feel lucky that I can say I have not been directly aware of people wanting to stunt my career because of my gender, but I’d be lying if I said that there hadn’t been quite a few situations I have been in that I have felt unsafe or uncomfortable while being in the studio.

I recently had to report one, and the studio is still deciding what to do about it, but when it has been in my studio or at events, often it’s just standing up for yourself. I wish I was a faster thinker and could come back at them with some quick-witted remark, but alas, I either just cringe internally or try to call them out if I don’t feel like my safety is in immediate danger.

The advice you have for women who wish to enter the field?

Tell people you are a producer/engineer/writer (or whatever you want to be), don’t play it down because as soon as you doubt yourself, they will doubt you. The sooner you start calling yourself producer, engineer, writer, you will feel your confidence grow!

Make the time to go to gigs, even if you are knackered. You can make contacts there, find new clients and I feel it’s important to support the other acts on the scene and keep your hand in with what people are creating

GO to networking events; they are not as scary as you think! Everyone is there to talk about their businesses/what they do, so you should never feel out of place. You will soon find that you end up saying the same things over and over and because things that people talk about don’t surprise you, you can prep because you know you’re likely to be faced with the same set of questions each time.

Don’t be afraid to put stuff out there, release a track perhaps, because you need to have something to show/send people. You might look back on it in six months and think, I wouldn’t do it like that now, but at least you are six months further down the line and have learnt from it. If you don’t do anything/ commit to anything, people will not notice you and will overlook your talents.

Genuine ability to use a DAW, play at least one instrument and just be lovely to people because most people are lovely back.

Maybe my headphones Audiotechnica ATH M50Xs! They are simple in that they are straightforward and reliable, I trust their sound, and I know I can get a nice mix on them.

Youngest female producer to have tracks played on BBC Radio 2