It’s Time to Stop Just Talking About It 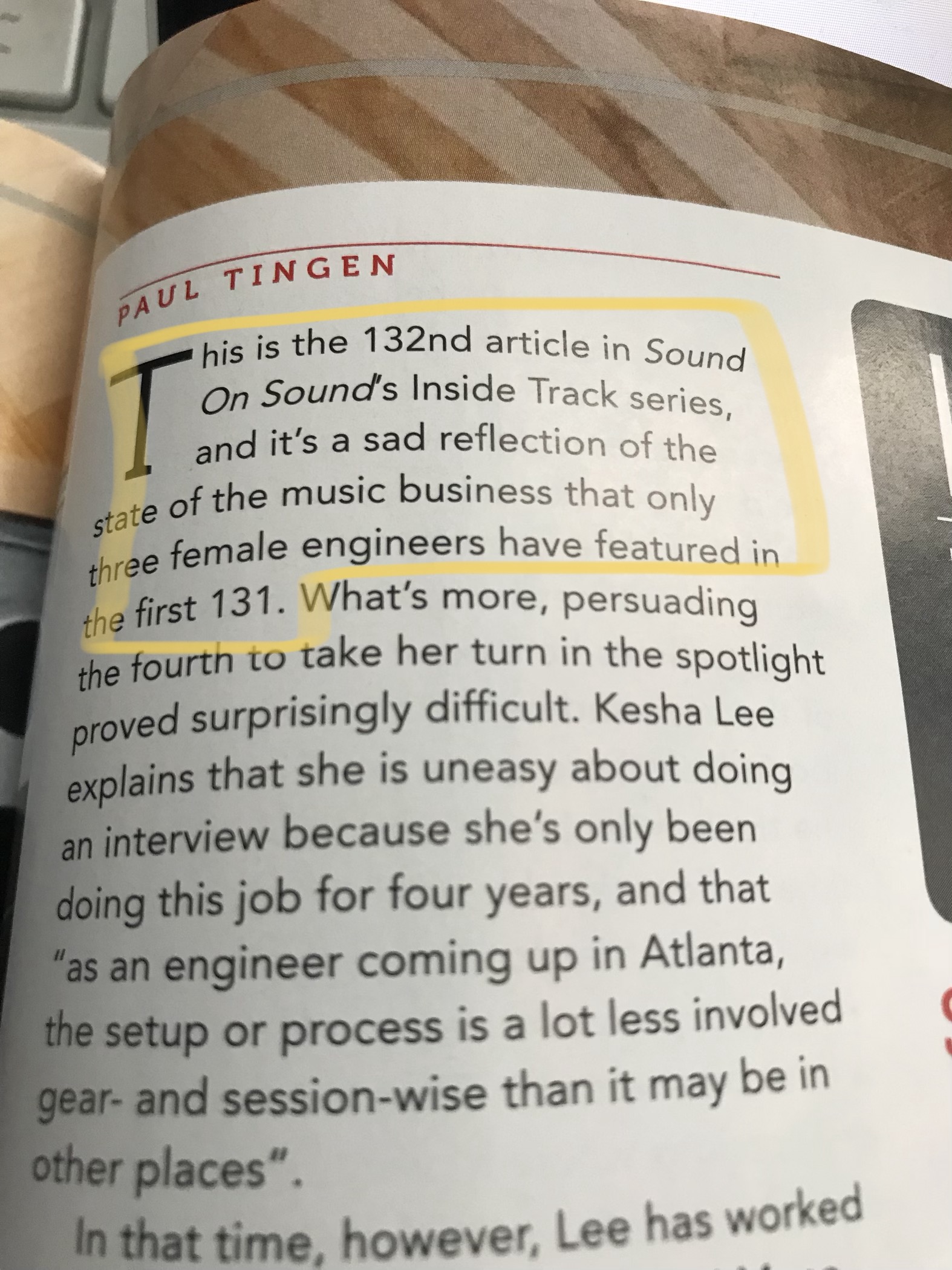 In January 2017, I asked the readers of this blog how they were going to take action to support women in sound – what were they going to stand up for that year? I am more than a little ashamed to say that it’s taken me over a year to decide to take an active stand myself. But now that I have, I don’t plan to stop.

I am exhausted by the questions put to me by professional panels, organisations, and publications which are more interested in talking about the issue of the lack of women in sound, than taking action to do anything about it. I am tired of talking about the problem when I could be boosting the profile of women in the industry by talking about my career in sound.

It is no longer enough to acknowledge there is an issue. If I want change – if we all want change – we have to take action and encourage the leaders in our industry to do the same.

A few days before International Women’s Day, I saw an opportunity to call out one of the major audio industry publications on the representation of women in their magazine.

Below is a transcript of the full Instagram conversation. The original can be found here

I was given a copy of the December 2017 issue of Sound on Sound at a conference last week and I was drawn to this statement in the Inside Track article about Kesha Lee “This is the 132nd article in Sound on Sound’s Inside Track series, and it’s a sad reflection of the state of the music business that only three female engineers have featured in the first 131”

You’re absolutely right; it is a sad reflection – not just on the state of the music business, but also on the organisations and publications that perpetuate gender imbalance and inequality in the music and audio industries. Which, by your own admission, includes Sound on Sound. You’re part of the problem.

The fact that fewer than 3% of the engineers featured in the Inside Track series have been female is pretty shocking in itself. On top of this is the reinforcement of the message that in order to work in the audio industry, you need to be male. Let’s take the December issue as an example.

There are no female writers credited that I could see. Of the 18 ads which include pictures of people, only 1 has a woman at a mixing desk – and she’s a student with a male tutor. Of the 11 ads which include quotes, none of the quotes are attributed to a woman. Special shout out to Radial Engineering who included 8 pictures of 8 male engineers with a quote from each of them in their ad, and to Warm Audio for their tagline “like father, like son”. Way to be inclusive, fellas. 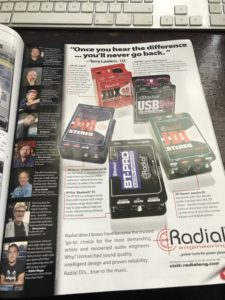 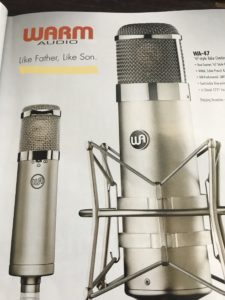 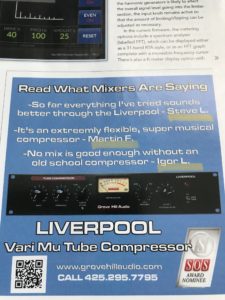 As a woman working in pro audio, I am often asked why gender imbalance persists in the audio industry. The short answer is that there is still a cultural and sociological bias that women don’t belong in technology. This manifests in the kind of non-inclusive imagery and marketing that you can see in the December 2017 issue of Sound on Sound. Put simply: you can’t be what you can’t see.

I’ve been training and working in pro audio for 18 years. There have been a lot of positive changes in the audio industry, for which I am grateful. We still have a long way to go if we want the 5% (the current representation of women in audio) to change to 50%. I want to work in a diverse, equal industry. I hope you do too. If you consider Sound on Sound to be an ally of women in the audio industry, then we need you to step up and do better. You’re in a position of power and privilege. You can use it to challenge bias among your advertisers, subscribers, and contributors and pro-actively support a more gender-equal industry. I hope you will.

Hi Kirsty, thanks for the thoughtful and thought-provoking points you make.

As regards advertising, SOS is only allowed to reject submitted advertisements for very specific reasons. Unfortunately, these reasons don’t include perpetuating gender imbalances within the industry. This isn’t a question of editorial policy but a matter of law, and one on which we have taken legal advice in the past. It is counterintuitive but is also, sadly, the current situation.

Regarding the authors who write for SOS, we are aware that bylines are overwhelmingly male, and we would really like for this to become less so. This is a reflection of the pitches we receive rather than any bias within the office. If you’d like to help us change this, then we’d love to hear from you or any female engineers interested in writing for us.

Your own writing is great, so do feel free to send some of your own article ideas over. We’re always on the lookout for new reviewers or people with interesting techniques to share. If you’re interested, drop an email to Ellen Glasper, our Production Editor (nell.glasper@soundonsound.com), and we can take the conversation from there.

Concerning the representation of female engineers and producers within SOS, this has always been a difficult thing to get right. Recent feedback has triggered a discussion in the office about how we can improve the representation of women in the magazine and in the industry in general, and we are open to suggestions about how best to do this. A lot of female engineers and producers have broken through in the past few years, which is great to see, and we hope to cover them in the near future if they’re willing. — The SOS Editorial Team

Thank you for your considered response, @soundonsoundmag. While I understand you have no legal recourse to change the content of advertising, you could issue a statement supporting diversity in sound, and encourage your advertisers to reflect this in their advertising with SOS. I also fail to see how including more women in the magazine is “difficult to get right”. You’re not even reflecting the current percentage of women in audio at the moment (5%) in most (if not all) issues, so (failing blatant sexism) it’s difficult to see how you could get it more wrong. Feature more women engineers. Feature more women producers. Feature more women studio owners. Particularly feature more WOC. It’s great that you’re discussing this, but discussion alone will not change gender inequality in the industry. 5 of the MPG awards this year went to women – there are 5 interviews with top industry achievers waiting right there.

Thank you for the offer to contribute. I am heartened that you welcome applications from female writers. I would be further heartened if you took action to go and find female writers, instead of passively leaving it up to them to find you. Have you approached any female tech writers directly? Have you reached out to the many women and feminist music and sound tech collectives, co-ops, and non-profits worldwide to ask if any of their members might be interested? There’s a comprehensive list of women and feminist sound & music tech collectives, co-ops, and non-profits. Have you actively encouraged women writers to apply with contribution ideas?

Regarding articles written by men claiming women “just don’t like tech,” I’m not that interested in your decision not to run articles that perpetuate gender bias – I would hope that you do this as a matter of course. I’m interested in the actions that you decide to take now and pledge to take in the future that will change gender inequality in our industry. You describe SOS as “the most respected music/audio magazine publishers globally.” Do you respect the female and non-male members of your readership and the global audio/music community enough to actively challenge bias in the industry, rather than simply noting that it exists?

Here’s a couple of suggestions: include the recent AES #HeForShe event in the news section of  SOS, if you haven’t decided to already. I believe you were in attendance. Take notes on what Ableton is doing on their website at the moment to increase the visibility of female artists and producers. (Note from the author: Ableton showcased exclusively female artists on their website for a limited period for IWD 2018)

I think (I hope) we’re in agreement that the gender bias in the audio/music industry needs to change. I repeat: you have a position of power and privilege in our industry.  Please use it to pro-actively support gender equality. 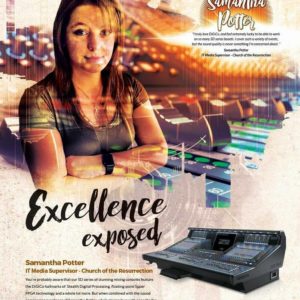 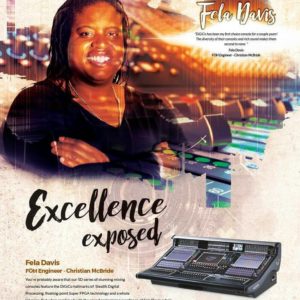 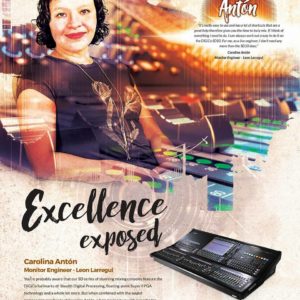 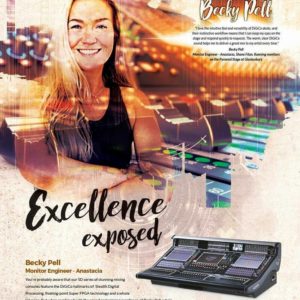 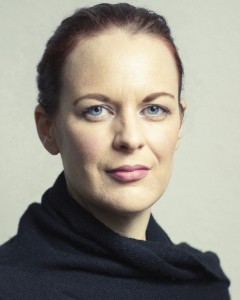 A sound designer, engineer and voice artist, Kirsty will be blogging about Sound Design for Theatre and Film, in particular how to do it on a budget. She will also be sharing lessons learned throughout her career.

Read Kirsty Gillmore's Blog
Browse All SoundGirls Contributors
X
We use cookies on our website to give you the most relevant experience by remembering your preferences and repeat visits. By clicking “Accept All”, you consent to the use of ALL the cookies. However, you may visit "Cookie Settings" to provide a controlled consent.
Cookie SettingsAccept All
Manage consent