How to Write About Women in Sound 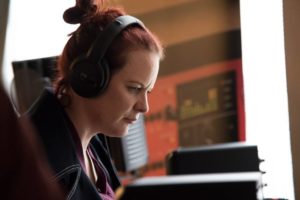 PSN Europe recently interviewed me about my work as a sound designer. Aside from the fact that it’s an articulate, interesting article – thanks to the writer, Tara Lepore – there is one key thing that makes it stand out for me. Although I had the opportunity to mention my work with SoundGirls, and how we work to support women working in sound, at no point does the article define me as a “women working in sound.”

In my seventeen years working in the industry, I believe this was the first time I haven’t had to answer a single question about why there aren’t more women working in sound/music, or on a similar gender imbalance-based theme. It was both a relief and hugely refreshing.

Interviews like this are necessary.  To the writers and journalists: female sound engineers, producers and designers have answered enough questions about why or how or what’s it like to be a woman working in sound and music. Talking about why women make up only 5% of the industry only serves to reinforce the message that women are an anomaly. The way you encourage more women into audio is to show women, particularly WOC, succeeding in various areas of music and sound. Make it clear to the female sound experts of the future that there are paths open to them. Put the focus on our careers, not our gender.

Instead of asking women what we can do about the industry’s gender imbalance, ask the people and organisations who influence the industry what they plan to do about it. The answers to those “women in the sound/music industry” questions are well documented – we, the women, have been talking about it for years. Take those and investigate the causes, put out a call to action, challenge those in a position of power who can instigate change.

Don’t force female interviewees to act as a spokesperson for all “women in sound.” If gender expression is a crucial part of an interviewees’ work, then it should be included – in a way that works for them. Let them bring it up. If they don’t, then it’s probably not something they feel is relevant to their career.

Highlighting sexism and sexual assault in the industry is important and relevant in the current climate, but it shouldn’t be the whole conversation. Nor should anyone expect women to share their experiences. It can be challenging enough fighting everyday sexism without having to relive trauma for an interview unexpectedly. If it’s an article about sexism, then that should be made clear upfront so the interviewee can decline if they wish. Otherwise, ask whether it’s relevant for the article.

If you’re interviewing a female sound professional about her work, it comes down to this: would you ask a male audio expert a question with the same angle? If not, then it’s probably unnecessary.

I welcome any writer who wants to support women and girls in the sound and music industries. The best way to do this is let us talk about what we love: sound and music. Ask us about what we’ve created, what inspires us, what artists we love and the gear we like to use. Take the opportunity to promote the hundreds of amazing women sound engineers, producers and designers and the work we do. Not the lack of us.

Resources for a more inclusive industry