How to be Lucky

“I’ve never had those kinds of well-paid opportunities happen, not everyone is lucky.”

“She’s so lucky she got that job, I’d kill to work there.”

“You’re so lucky to be doing what you love! I wish I could do that.”

Any of these sound familiar? I saw one of them on Facebook today. One of them is something a friend said to me a few days ago.

Up until recently, I got annoyed when someone described me as “lucky.” I would have said, that where I am in my career today has very little to do with the vagaries of fate, and everything do to with hard work. 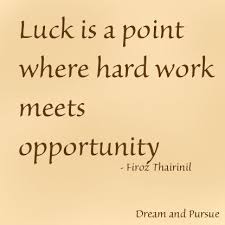 But recently I was reminded of the well-known quote attributed to Seneca the Younger: “Luck is what happens when preparation meets opportunity.” And I realised, I am pretty lucky.

I have spent the past twenty years preparing for my current career and creating opportunities. I invested in training and qualifications. I moved to the other side of the world on a one-way ticket where there were more chances for work. I learned how to run a business as well as configure a console. I joined organisations, I went to events and talked to everyone I could. I learned from other people’s experiences and my mistakes. I built up my skills and my portfolio, and then when the opportunities arose, I took them.According to Seneca, I am lucky. And I know – at the risk of sounding like a motivational speaker – you can be too.

If your dream sound job came up tomorrow, would you have all the skills and experience you need to take it? What do you have to do to be ready for that job? You need to be prepared not just for when opportunity knocks, but for everything leading up to it – those smaller jobs which will gradually take you to a place where you feel capable of doing the more prestigious jobs.

Back in June 2004 I really wanted to be a radio sound engineer, ideally working in radio drama. I’d got as far as the practical test round of interviews for a trainee sound engineer position at the BBC in London. It was my third application for a trainee position, and the feedback from the previous one was to get more hands-on experience. A colleague in my department suggested trying a local arts radio station, as they were always looking for volunteers. I didn’t follow it up. On the day, the test went fine, but I didn’t get the job. The feedback they gave me was that they were looking for people with practical radio experience. I had the opportunity to get a job that would put me on the path to my chosen career – but when it came to it, I wasn’t prepared.

Create your own opportunities

If you’re relying on opportunities coming from one or only a few sources, you need to broaden your horizons. Think about the people who could recommend you for jobs, not just within sound people who work in adjacent fields. Venue owners, studio owners, production managers, tour managers, producers, directors, lighting designers, other sound engineers. Make connections offline and online and maintain those connections – relationships take time to develop. Make sure you’ve got a consistent, professional profile online, whether that’s a personal website, or an online professional directory like the Directory of Women in Professional Audio and Production (sign up if you haven’t already). The adage “you never know where your next job is coming from” is a persistent one for a good reason: it’s true. And the people who might be the ticket to your next step on the career ladder can’t give you anything if they don’t know you’re out there.

Take action and keep taking it

Getting up and doing it is the first real step – no one gets lucky by waiting for the world to come to them. But what if you’ve done all the preparation you feel you need, you’ve busted a gut creating opportunities, and you’re yet to feel that magic “lucky” moment? Keep at it. Look at learning the kinds of skills that will attract not just the jobs you’re looking at now, but the ones in the future. Reconnect with contacts who’ve dropped off your radar and tell them about the latest brilliant show, album or project on which you worked. The more prepared you can be, and the more opportunities you can make, the luckier you will become.

Whatever your goals for the future, in every possible way, I wish you good luck in achieving them. 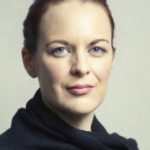 About Kirsty: Originally from New Zealand, Kirsty has been based in London, UK since 2002. Her 15-year career has seen her work in music production, post production, live sound and broadcasting, including eight years training with and working for the British Broadcasting Corporation. She established her own sound design & voice production business, Sounds Wilde, in 2010 and now works as a freelance sound designer for theatre and film, as a voice reel producer and voice artist.