How Do You Measure Career Success? 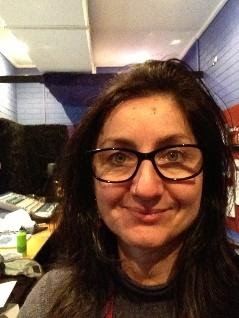 I’ve been working as an audio engineer in Australia since 1997.  When I meet young sound engineers starting out, particularly women,  I am inspired by their passion and fearless attitude towards forging a career in this very challenging industry, particularly in a country like Australia where the market for audio professionals is pretty small.  The same questions and fears that I faced working in a male-dominated industry still confront women today. I want to share my story to illustrate how a career in sound can take many paths, but the key ingredients for longevity are the same today as they were 25 years ago.

I started life as a classical musician completing a Bachelor of Music majoring in Clarinet in Adelaide, South Australia.  In the classical world, it was rare to come across audio reinforcement, only on the odd occasion of being part of a recording, but when I finished my studies and started gigging as a sax player and with pops style orchestras I started to notice the microphones, the miles of cables, and how there were only ever guys running the sound.  That all looked way cool compared to hanging out with the middle-aged people sitting in symphony orchestras.

Teaching music in the UK a few years later – the early 90’s, when techno/jungle and drum and bass were coming up from the underground in London,  kids were bringing cassette recordings to the class of pirate radio techno raves and asking how to make that music. I didn’t know, but I wanted to learn.  Each school had bits and pieces of gear – 4 track recorders, microphones, outboard gear, mixing desks – so I started to teach myself. Eventually, I enrolled in the SAE Diploma of Audio Engineering course and embarked on a new career at the age of 26.

Studying in London brought great opportunities.  I was resident FOH at my local Latin bar, mixing salsa bands that actually came from South America, which for an Australian was a new experience.  The guy that owned the PA became my first mentor – a generous Ghanaian man called Tito, who was happy to teach me everything he could. Other opportunities arose in film and TV but overwhelmingly I found live sound to be the most exciting. 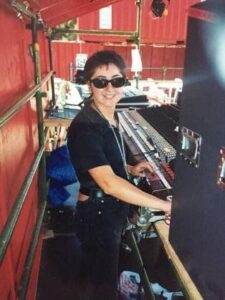 Eventually, the lure of the sun and the beach called me back home, where I landed in Sydney as an experienced live sound engineer, but with no idea of how the Australian industry operated.  I talked to every FOH engineer at every gig or festival I went to and found a lot of great advice was freely offered. It became clear that to be a working sound engineer in Australia you had to mix rock and roll.

So far, I had never crossed paths with any other women working in the industry.

I went and got a job with Jands – who at the time was the biggest PA company in Sydney that provided the production for all the touring acts, had a huge inventory of Clair Bros, Meyer, and JBL, and employed dozens of audio and lighting technicians for both touring and local shows.  Finally, I met two women employed as lighting techs, but working for Jands was as masculine an environment as was possible. These guys were (notoriously) hardcore roadies, in the days when OH&S concerns were laughed at, and you proved your worth by being able to lift the most, party the hardest and work the longest hours.

Despite the prevailing attitudes, I earned respect from my colleagues, and again was mentored by a couple of the guys, gaining invaluable training on large scale sound reinforcement systems.   I liked the job, the loading in and out, the long hours, the banter – the physicality of it all. I learned quickly that you don’t need to be able to lift as much as the guys – there are plenty of other jobs to do and if everyone is working together no one has an issue.

Jands was going through one of their many restructures, which saw them sack all their permanent staff and invite back half of them as casuals.  I took this opportunity to get out and keep looking / learning. A couple of years in TV followed – working on entertainment shows which showcased live bands, as well as some very well-paid hell in the Shopping Network channels.

My next major achievement was being part of the Adelaide International Arts and Fringe Festivals for eight years.  These gigs were so much fun, working in crazy purpose-built venues, or parks, or rivers, working with international artists, working with crew from all over the country.  These festivals all involved miles and miles of cables, large scale reinforcement systems, and logistical nightmares – requiring way more than audio skills. Operations and scheduling were organisational skills that I really enjoyed using and the beauty of these Arts festivals was more women on the crew!  The Australian rock and roll scene really was a man’s world for a very long time. 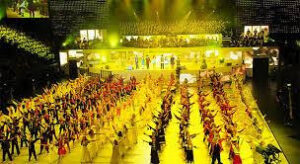 Back in Sydney, the lead up to the 2000 Olympic games was in full swing.  I was working as an assistant audio director with the Arts Unit of the education department – a department that provides large scale performance opportunities for public school talent.  We would famously produce the Schools Spectacular every year in the Sydney Entertainment Centre – flying a massive PA, fully miked orchestra, dozens of radio mics, full broadcast split.

The Olympic Committee in conjunction with Norwest Audio was looking for as many large scale gigs as possible to practice fine-tuning the PA they would use for the opening ceremony, so our organisation was kept busy in the years leading up to the main event, staging events such as the Pacific School Games,  – so Norwest could get their specs right. During the actual Olympic event, I was seconded by the Olympic organising committee to be the Audio director of the Team Welcoming ceremonies. This was a great gig – pre-production involved going all over the country recording children’s choirs singing the national anthems of each country, that would be played at the ceremony each country has when they arrive in the athlete’s village.  For some countries, it is the only time they get to hear their anthem played.

In the 2000s I moved to Melbourne and started my own audio services business – Mind’s Eye Entertainment – writing and producing pop musicals for schools, sound design for theatre, and doing whatever else came along to pay the bills.   As much as I loved the life, I have always been an absolute realist with a pragmatic approach to survival, so when an opportunity to start up Staging Rentals in Melbourne came about, I took it. This was not audio, but it was events and high-end corporate events with large budgets.  So, I got to use the operations and logistics skills to full effect, as well as being account manager, truck driver and on the tools building stages as required. Again, the physicality of the job appealed to me. I met my husband at this time and loved working with him on gigs, but the inevitable question of age and babies started nagging.

I was 39 and decided to try and have a baby.  The male-dominated worlds I had been working in were not going to be conducive to a mature woman getting pregnant, so I changed jobs again and got an office job coordinating logistics in the exhibition industry.  At 41 after one round of IVF I produced a baby boy, and again was confronting how to shape my career while being a mother. A great fall back I always had was a teaching qualification, which I did as a matter of necessity way back when I finished uni.  I started looking for new career directions and discovered the world of vocational education – you could complete a Certificate III in sound production while at high school. This was an incredible discovery – all my qualifications and experience were perfect for a job like this.

Six months after having a baby I was teaching sound engineering to 16 and 17-year-old boys at a catholic school.  I loved it.

I continue delivering audio training to school kids at a private school in Melbourne. I teach part-time and spend the remaining time being technical production manager of the school’s large events. The school has a 1000 seat concert hall with flown Nexo array,  a multitude of incredible microphones and a generous production budget. 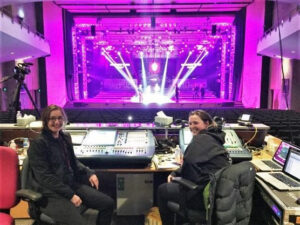 Teaching a student at school

Discovering Soundgirls a couple of years ago was huge for me.  I was 50 and starting to question who I was – was I a sound engineer, a teacher, a manager?  I was middle-aged, grey hair, and still coiling cables – what kind of role model was I? How do you measure career success in the world of audio – FOH for a touring group?  Or simply having a workplace where you get to work and talk about audio all day?

After getting to meet the Melbourne Soundgirls and share stories, I found my personal story was finally validated – the fact that I am still here 25 years later thinking, talking, working and now inspiring young people to pursue a career in audio defines me as an audio professional.

New goals are furthering my knowledge of acoustics.  I love the science of sound, how it behaves in a space, and I’ve taken very baby steps in studying acoustics – logarithms, logarithms, and more logarithms!