The National Association of Broadcasters Convention is a yearly gathering in Las Vegas that’s somewhat akin to that childhood moment where you walked into a Toy-R-Us. It’s an astounding amount of stuff that you want to play with, but frustratingly you can’t take all of it home. After getting off the tram from our hotel to the convention center, my first thought was, “Any convention with a helicopter doing camera demonstrations in the parking lot is going to be the best ever!”. My second thought was, “I wonder how I’m going to talk those people into letting me fly that later”? 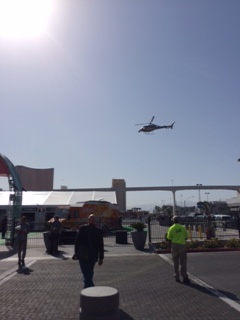 In addition to being a helicopter obsessed, audio technician for my company, I also help with running the business. NAB is the best place to learn about new technology and network with people. The convention consists of an expo hall with every kind of tech imaginable to make tv, radio, and film happen. It also has workshops, speakers, courses, conferences and panels that you can attend. It’s a huge gathering of around 100,000 people from all over the world.

Our first order of business was to map out a strategy. And I mean ‘map out’ in a literal sense. The expo uses every part of the Las Vegas convention center, and there’s no way to see it all in the three days. The only chance of finding where you needed to go was to use the NAB phone app.  Even then without a clear sense of which way was North, I ended up using massive, multi-story booths like GoPro and Sony as navigational aids.

‘…so if I’m three aisles over from Panasonic, across from what appears to be a generator company, I need to face the green screen company and walk forward about six booths, skirt the side of Mordor then I should arrive at Sennheiser…’

I wasn’t the only one logging some serious mileage though. As you walk around, each passing hour the expo halls looks more and more like the cheerful version of an airport experiencing massive delays. People in work attire are crouched along the sides of the walls feverishly catching up on work emails or staring off into space, shoes off, coffee in one hand and a phone in the other. Outlets are prime real estate. Luckily for us, we were the masters of our fate and decided early on to not overbook the day with meetings and to fortify ourselves daily with coffee and breakfast burritos from the food trucks parked outside.

In addition to finding out about some new companies and products we had heard of, we also wanted to meet up with the manufacturers we are vendors for.  We deal in products for the usual set of suspects: Sennheiser, Shure, Riedel, DPA, Phonak, Comtek, Telex and on and on. Showing up at the booths to talk with our sales people is a great way to find out what new offerings there are and what is in development.

Foremost on our minds this trip is the upcoming FCC auction of the wireless spectrum. This should be a concern for all of us SoundGirls who work with wireless. The auction will remove a large portion of the spectrum that is currently utilized to make wireless microphones and communications happen. Articles with the latest developments are a pretty common sight in the trade magazines, so I imagine that some of you are familiar.  Manufacturers, TV networks, venues, and companies such as us are trying to be as proactive as possible in dealing with this gigantic and costly challenge. There’s a lot of promise in the products we saw at NAB, but every offering had a set of pros and cons. We have to take into consideration the requirements of our clients, the environments we operate in and the cost.

There are some serious innovations being employed to coming up with workable solutions for this spectrum crunch, both for comms and wireless mics. Some of the products can handle many users and require a spread out antennas system, but have a limitation on how many users can be on one antenna. Other comms use a similar setup of antennas that we use now and are up in the 2.4 GHz range but sound like a how long distance phone call used to sound. There are even a couple of comms systems that will work in the 1.9 GHz portion of the spectrum set aside for cordless phones. There are frequency agile wireless devices, they hop around on available frequencies on their own which is incredible, but they have a hefty price tag. We incorporate a variety of these devices already based on show requirements, now we just need to decide what else to add to our inventory.

As one walks around, it’s clear that people have come from all over the world with a similar need to strategize for their business. It’s mind boggling to see all of the products and services on offer.  Antennas of every size and shape, car mounts for cameras, camera rails, different sized telescoping pole mounts that you see on the top of news vans, tactical satellite dishes, parked TV and satellite trucks, road cases, every kind of bit and piece for lighting you can dream of, surround sound microphone setups, this odd fish pole camera holder: 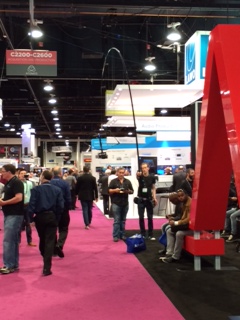 The list of products is seemingly endless. I didn’t even make it to one of the halls. My personal non-audio related favorite had to be this adorable, bad ass RC car with a camera on top. 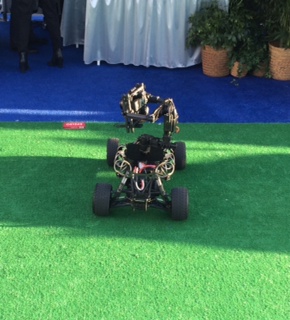 You would often hear that this convention was ‘The Year of the Drone’ which seemed to be confirmed by the numerous booths displaying them in various flight simulated conditions.   Some of them were being flown in netted cages. There were so many drones that when I saw an uncaged, airborne object headed towards me, I had a momentary freak out before I realized it was a lost pigeon. For all I know, somewhere in that hall someone had the right tech, tools, and know-how to rig a camera on it too. 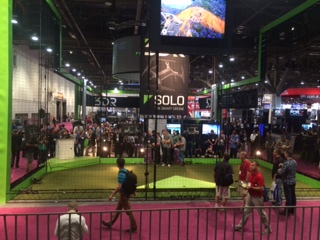 This is one of the caged in drone areas.

In addition to all of the products on offer, it’s a great place to network. A lot of time and money is spent on dinners, receptions and events in the evening. But it also can be pleasantly informal. Standing in the long cue for Starbucks I met a woman who told me about a panel later in the evening promoting gender equality in post production. Fantastic!

And last but not least is the seminar or educational element. You can choose to purchase different passes for workshops, seminars, panels, conferences and various other sessions.

A sampling of this year’s offerings:

Media Technologies for Military and Government

If any of you SoundGirls want to meet up next year, the dates are on the NAB website for 2016 already: April 18 through the 21st. Just look for the tall, neon colored haired woman in comfortable shoes if you want to find me. 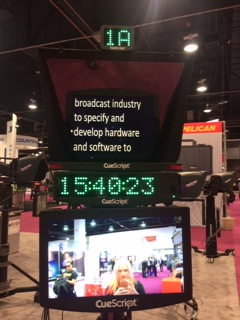